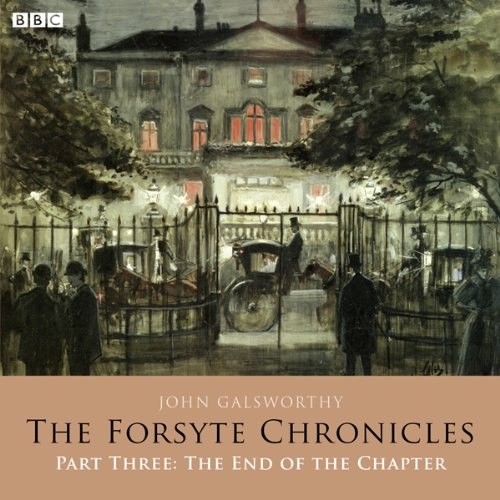 The Forsyte Chronicles: Part Three: The End of the Chapter (Dramatised)

The End of the Chapter is an adaptation of Galsworthy’s three novels chronicling the lives of the Cherrells, cousins of the Forsytes.

Maid in Waiting starts in 1928, with the Cherrell family facing turmoil. Captain Ferse has returned from a mental institution – but is he truly recovered? Meanwhile, Dinny Cherrell is fighting to save her brother Hubert from a murder charge that could see him extradited to Bolivia – and she has matters of the heart to preoccupy her too….

Flowering Wilderness sees Dinny, the onetime ‘maid in waiting’, deeply in love with an old family friend. But soon she and Wilfred start to feel the pressure on their relationship. Will Wilfred stand and fight?

In One More River, newly elected MP Mr Dornford is smitten with Dinny Cherrell, and a society divorce scandal shocks the whole family. The outcome is to leave Dinny in a quandary. Can she finally find the happiness she deserves?