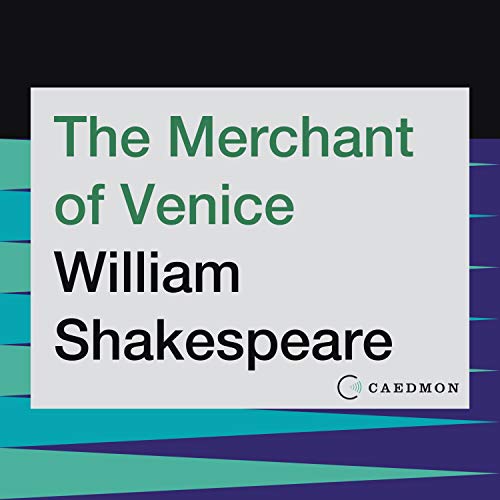 The Merchant of Venice

One of William Shakespeare's greatest plays, The Merchant of Venice is also his most controversial. A tale of the triumph of true love, it is packed with witty dialogue, philosophizing, and lyrical flourishes. But the comedy is often overshadowed by concerns about anti-Semitism swirling around the character of the Jewish moneylender, Shylock. Listen as this production by the Shakespeare Recording Society brings the play to life, warts and all, and demonstrates that an exploration of religious intolerance makes this work even more vital and compelling than ever. This full-cast recording features Hugh Griffith as Shylock, Dorothy Tutin as Portia, Harry Andrews as Antonio, and many others.

"...as passionate, lyrical, and eloquent a set of readings as you are likely to hear." ( Gallery Magazine Booktalk)

The Merchant of Venice has received criticism that usually reflects the values of the critic and the times of the criticism rather than the quality of the play. Perhaps my review will be judged similarly, but one can only try. If you hear or read this play, you will undoubtedly form your own opinions as to how Shakespeare portrayed Jews and Christians. Regardless of what that opinion is, there is probably ample evidence in the play to support it.

My opinion is that, contrary to the to the opinion of the notable Shakespeare critic Harold Bloom, the play is not anti-semetic. It certainly depicts a time in European history when anti-semitism prevailed, but Shakespeare seems to have taken great pains to show the deep personal hurt caused by such attitudes. (For example, see Shylock's dialog in Act 1, scene 3.)

Shylock, in my opinion, is one of Shakespeare's more sympathetic villains. He is neither evil by nature, nor by religion. His villainy is borne out of revenge. He has had his business undermined, been "spet" upon, slandered, and generally treated like a dog because he is Jewish and he lends money with interest. The Christians of the day would, of course, seek revenge if they had been treated likewise. So does Shylock.

Here's the lesson: Revenge solves nothing. It's kinda like the old lessons that violence begets violence, hate begets hate, or even Shakespeare's own sin will pluck on sin. All of Shakespeare's characters have some human weakness, and Shylock's is his lust for revenge, though the play clearly shows in Act 3, scene 1, that revenge is not a Jewish flaw, but a human flaw. The only difference between Christians and Jews in this play is that the Christians get away with revenge and the Jew doesn't.

This is one of the finer Harper/Caedmon plays. They are usually WAY overacted, but not so much in this play.

This audiobook is recorded with what the producers must have thought was "real life" background noise, and the characters are not talking to microphones, but, to the air.
This has a horrible effect on the recorded voices, and leaves the listener constantly trying to hear what the actors are saying, but, tried as I did, I could not.
Then, there was something else that bothered me, and took me about an hour to figure out what it was.
The narrators are, of course, either reading the script (book) or they have memorized it. There is nothing wrong with this, except that, as a result, due to poor acting, each phrase that comes out of their mouth is a perfect speech, delivered as if they had, well, memorized it. They never doubt, they never falter, their speech never slows down as they think of a work, or use interjections to fill in “thinking time”, they use the most flourished words available to any writer, and they come out their mouths in a way which clearly shows that the words are just lining up one behind the next in their mouth, with no feeling, no sense of creation, it is just dead, learned words coming out one after the other.