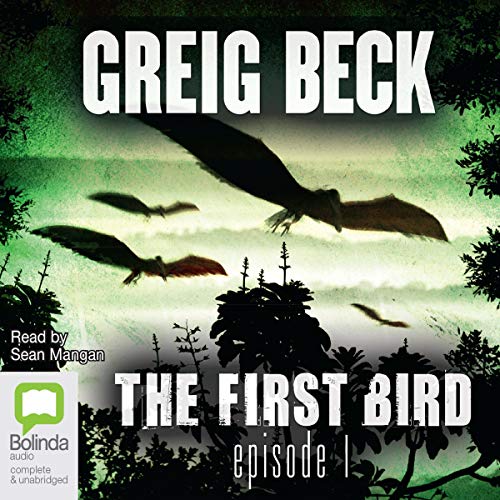 Matt Kearns, linguist, archaeologist and reluctant explorer from Beneath the Dark Ice and Black Mountain returns in his first full-time adventure. And this time he doesn't have Alex Hunter to save him when the stuff hits the fan.

When a fame-hungry scientist brings an impossible, living specimen of a creature long thought extinct back from the wild jungles of South America he unwittingly brings along a passenger. Something with the potential to destroy every living thing on our planet.

The infestation begins, rapidly overtaking medical resources and resisting all treatment. One woman knows the danger: Carla Nero, chief scientist of the Center for Disease Control. She makes Matt an offer he can't refuse and together they join a team heading to the deep jungle in a desperate race to locate the hidden place where the specimen was taken.

Only by finding the location of the specimen can the team - and the world - hope to uncover the secret of how to survive the ancient, horrifying parasite that has been released.

Enjoyed the first episode BUT annoyed that the book was released in three separate segments instead of just one. We have to pay more money this way. Episode 1 was good enough that I bought episodes 2&3 as soon as I finished the first. This was a mistake. Episode 2 became tedious with way too many "monsters" and deadly events. I also wanted more details as to what was happening back in the US. Have started Episode 3 but won't finish it. It lacks the promise of #1 and isn't worth my time.

NO CROCODILES HERE, THEY GET EATEN

250,000 ACRES OF UNEXPLORED JUNGLE
Remember the old black and white movies they would show on Saturday afternoon. Movies like the Creature of the Black Lagoon. This first episode is a movie like that, only on steroids. I might be a 56 year old man with the heart of an eleven year old boy, but I love this type of book. Also reminds me of Amazonia by James Rollins. An Indiana Jones type runs out of the jungle with a live specimen of the first bird. He brings it back to the United States. Then his skin starts falling off, for he brought back more then the bird.

EPISODE ONE
I read the reviews, so I was warned. The is not book one, this is an episode and it ends with a cliff hanger. Almost no issues have been resolved when this episode ends. I would have rather it had been a full book with sequels, but I knew what I was getting into and I will be getting episode 2.

INSECTS DON'T KNOW FEAR
This is good because of the story. The writing is not above average and the characters mostly suck. I thought he over did it with the Macho Man thing on two of the characters and I did not understand the rudeness of the FBI agent in the beginning. The story is always entertaining and it took me back to lazy Saturday afternoons, when I was Eleven. Probably the best time of life for most boys. The creatures are scary, such as the snake that swallows a man whole. A lot happens in this episode and it ends just when they get to the Lost Island scene (Conan Doyle).

Narrator does a great job.

although these days the young'ns grow up so fast so perhaps if you're 8, this is the book for you.

Not a complete story - too bad, it was promising..

The title indicates that it is Episode One - which I took to mean that it was the first part of a series... i.e. book one of, say, a 3 book series. This was not the case: this is more like an Episode 1 in terms of a storyline arc in a TV series... i.e. as if you were watching part one of a 3 part TV show where episode one sets up the problem, episode two explores how it can be resolved, and episode three resolves it.

In the latter example, you do expect a cliff-hanger at the end of each show, and you will tune in next time to find out what happens. This novella is exactly like that... the characters get to a certain point, in the middle of the plot, and the story just stops. It does not resolve any single component first, it just ends at the end of a scene.

This is why I have only given the novella 3 stars (yes, the word novella is accurate - it is too short for a novel, and if it were a short story, it would have had a resolution). The story is decent and suspenseful but... a written story ending in the middle of a plot point is just jarring. You are absolutely required to get the next book in the series if you want to know anything about how this story is resolved (and my guess is that you will need to buy the 3rd one as well).

If novella 2 of a series is MANDATORY in order to have any sense of resolution to a story, and each part is too short to be a proper novel in the first place, it should be packaged and sold along with novella one.

Oh, and the price of it does not reflect the fact that it isn't even a complete story. You will buy it thinking you got a proper book on the cheaper end of the scale, not 1/3 of a complete story which will end up costing more than many other 20 hour audiobooks

I did buy the next one because the story was engaging; I am just a bit annoyed at the marketing ploy. There is no graphic violence or sex, and not much in the way of foul language either. The narration is quite good.

The first part of this three part story is very promising. A devastatingly lethal parasite is inadvertently brought back to the states from the Brazilian jungle. A team is sent back to the jungle to find the origin of the parasite and possibly a cure for the deadly parasite which is spreading faster than the common cold. Fans of early Rollins and Preston/Child will enjoy. No problems with the narration. You will definitely want to quickly move to the second episode.

This is a classic pulp style adventure into the jungles. Great characters, lots of adventure, very entertaining. When I finished this one, I couldn't wait to listen to the next one. One word of caution: the 3rd installment stinks, but the good news is that its not entirely needed for the story. Just listen to the first two, and then make up your own ending for the third one, because anything you come up with will be better than the crap ending they drop on us.

Don't let the title fool you.

Not a five star as some say. I'm already listening to the 2nd book. There is more to it then just "birds". Other "creatures in the forest lurk. Price is good so got for it.

Story is good, interesting, keeping on until the end. But I don't think it will be as good as it is without the performance!
10+ to Sean Mangan!

I really enjoyed this book, it's the first of three and I cannot wait to listen to the next episode. The writing is done really well, you can tell lots of research went into it and it is very entertaining. Sean Mangan does a great job with the narration,

Intregued as to where this story is going now!

Anthropology, Amazon forest site, paleo-bird link as well as the hook of an ancient disease getting a new foothold in the modern world! The ,author has hit four of my six most interesting subjects just with this one story!

The narration of the story made me feel I was along during the trek through the forest and I want to get back to it. Please!