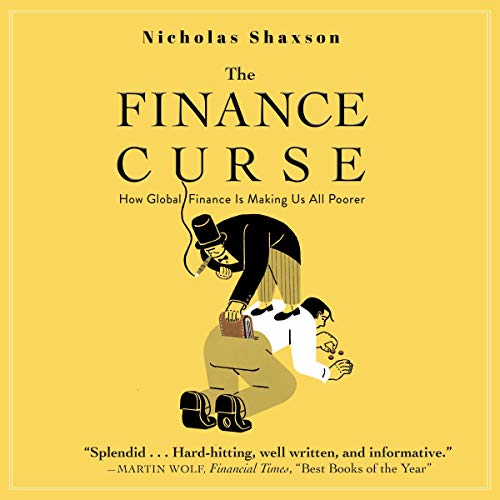 Financial journalist Nicholas Shaxson first made his reputation studying the “resource curse,” seeing first-hand the disastrous economic and societal effects of the discovery of oil in Angola. He then gained prominence as an expert on tax havens, revealing the dark corners of that world long before the scandals of the Panama and Paradise Papers. Now, in The Finance Curse, he brings his knowledge to bear in an eye-opening investigation of how banks have overbalanced the economies of Western democracies, exerting an outsize effect on policy-making and effecting a brain drain of the brightest and best to the financial industry and its offshoots, much to the detriment of both business and broader society.

How did we get to this situation? Shaxson describes the transformation of banks over the twentieth century as they changed from relatively small institutions that did well for themselves by serving the needs of business, to unfettered global behemoths. As the world reeled from World War II, the banks grew bigger in the post-war restructuring, experimenting with esoteric financial instruments like the Eurobonds in the 1960s, and then in the 1970s and ’80s taking increasingly high risks in order to compete with each other to return more profit to their demanding shareholders. Now these megabanks spread the fiscal gospel that business must be taxed as little as possible, that corporations need rights previously granted to humans, and encourage a fight to the bottom between states to provide the most subsidized environment for big business, in the name of “competitivity.”

We need strong financial institutions - but when finance grows too big it becomes a curse. The Finance Curse is the explosive story of how finance got a stranglehold on society and how we might release ourselves from its grasp.

Great explanation of modern financial manipulations around the world, of all sorts and how it hurts us.