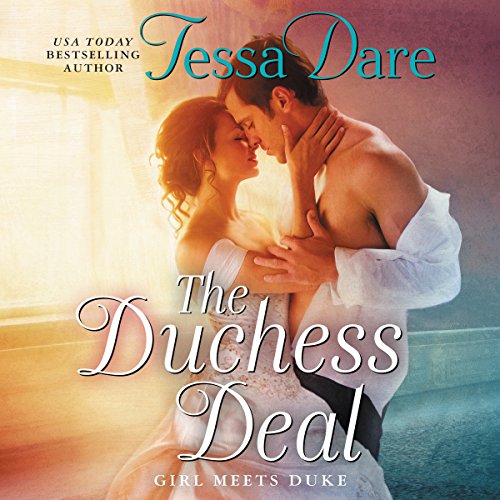 When girl meets Duke, their marriage breaks all the rules....

Since his return from war, the Duke of Ashbury's to-do list has been short and anything but sweet: brooding, glowering, menacing London ne'er-do-wells by night. Now there's a new item on the list. He needs an heir - which means he needs a wife. When Emma Gladstone, a vicar's daughter turned seamstress, appears in his library wearing a wedding gown, he decides on the spot that she'll do.

But Emma is no pushover. She has a few rules of her own:

The Duchess Deal is not historically accurate and a bit nonsensical at time. However, it is an absolutely hilarious read, full of heart and witty characters you can't help but love. I really recommend this book for anyone looking for a quick read to get out of a reading slump

A man with scars ,inside and outside. A woman with loyalty, kindness and courage. And fun , lot of fun . If you want to smile, and be warm inside don’t miss this book. It was the first time I read Tessa Dare. After this one? I want to buy the next!

I love romance novels by Georgette Heyer, Lisa Kleypas, Laura Kinsdale, Julia Quinn, and many more but This!Was! Wonderful! The perfect combination of humor (I actually laughed out loud), charm, intelligence, feminism, machismo, psychological insight, plot, children, cats, and OMG the sex! It was hot, inventive, not too much, not too little...All was made even more enjoyable by the stunningly adept, perfectly nuanced, absolutely spot-on interpretation, and always compelling performance by Mary Jane Wells, who is now my favorite narrator (and I've listened to a gazillion audio books, trust me). Other than the aforementioned Georgette Heyer's Regency romance novels, which are in a league of their own (and have no sex scenes, by the way, but you don't really miss it), I have never before loved a romance novel so much that I wanted to re-read it immediately, but this is so much fun I can't wait to read it again!

A Comedic Romance That You Can Take Seriously

If you could sum up The Duchess Deal in three words, what would they be?

What other book might you compare The Duchess Deal to and why?

This book is similar in concept to Lisa Kleypas's "Devil in Winter." In both books, two people get married to further their separate goals, but wind up falling in love.

Which character – as performed by Mary Jane Wells – was your favorite?

I adored Mary Jane Wells's portrayal of Ashbury, the hero. She makes him sound pompous, almost stuffy, which is not the typical voice for a love interest. But Wells makes it work, turning Ashbury into a hilarious, distinct, and lovable character.

Come at once if convenient. If inconvenient, come all the same.

Mary Jane Wells knocked it out of the park with this performance. Tessa Dare exceeded expectations. This book should be a part of any Historical Romance library.

5 HUGE FUNNY STARS! This book was fantastic!! It was super funny and had me laughing within the first few paragraphs! The writing was superb, the use of uncommonly used words, in just the right spots made all the difference. The wounded/tortured hero is not my favourite plot line, as usually I find them too sulky or whiny. This book did not conform to that. While Ash did sulk, he did so with flair and wit.

I loved how Ash was actually a good person, how he longs to love her.. and how sometimes he just can't stop himself from doing so- even when he tries to. Emma was a strong leading lady, she stood up for what she wanted and didn't let Ash get away with anything. She kept pushing his boundaries and they had wonderful chemistry together.

The narration fantastic! Mary Jane Wells has a style all her own and pulls out the sarcastic wit that was needed for this audiobook to succeed!

I highly recommend this book and I am sad it is over… because how will the next book I read compare?!?!

I loved this story! it was so good! I just loved Ash and Emma! They were perfect for each other. They had lots of chemistry and lots of hot and steamy sex. Well written sex.

The story line and plot was great. It all flowed so nicely and the wow was there some funny LOL moments. Even though the Duke was scarred he was funny witty and a great personality. Emma was beautiful and funny and witty as well, She was not going to let his sarcasm get the best of her at all.

I highly recommend this book, Tessa Dare is one of my favorite authors. There was lots of amazing dialogue throughout the entire book! LOVED IT!

As for the narration, it was great! Mary Jane Wells did such a great job on the voices and the deliverance of the dialogue it made the book even better. She reads with emotion and the men sound like men.

LOVE IT LOVED LOVED IT!

The narrator truly made the story come to life and the characters personalities an enjoyable listen.

I loved the characters and the narration. The dialogue was clever, funny and witty as many other reviews have noted. The problem I had is that there really wasn’t much of a storyline. Boy meets girl and they commence to misunderstand each other until the latter part of the book. I was hoping for more plots twists or action.

a SEXY Beauty and the Beast!

An independent but poor young lady meets her beast in the form of the Monster of Mayfair. Sure, we know the girl gets the guy in the end but there's a lot of fun along the way.

I love Mary Jane Wells. She's my favorite reader of historical romance, then Rosalyn. There are so many readers I can't stand (ie hissy, whiney Justine Eyre or the monotone cadence of Heather Wilds aka Carmen Rose) but Mary Jane does a wonderful Scot and Welsh male voice and the girls are great, too. Mary Jane gives the author great pillow talk.

I can hardly wait for Tessa's next novel. They are steamy and sexy!

The Duchess Deal is such a wonderful tortured hero historical romance. It made me laugh, cry, and feel all warm inside. The perfect blend of comedy, passion, and healing power of love. And Mary Jane Wells as narrator really brought the story to life and made the characters real. Bravo!

A go-to story when I need to smile

This book is on my 'listen to again' list for anytime I need a smile, a chuckle, a warm feeling.

I loved this book! Even though there was no suspense or mystery or anything other than a love story, it was 389 pages of crazy and wonderful and funny stuff. Of course, it was another book about a marriage of convenience but this a little different inasmuch as the duke needed an heir and he offered Emma THAT kind of marriage with the stipulation she would only have to “be” with him at night, in the dark, until she got pregnant and then she could move to the country. That was because he was so scared on his face and body from the Napoleonic War and he was afraid if she saw his whole body and face together she would run screaming, like his other betrothed did. So, Emma went from being a seamstress to being a duchess.

It was so sweet how they fell in love with, naturally, both of them fighting it. Him because he knew no one could love someone that looked like him and her because she had already tried love and it didn’t work out so well.

And when he became the Monster of Mayfair it was pretty funny. That’s when we met 12 year old Trevor, and that kid was hysterical. Where Trevor was funny Khan, the butler, was droll and unfunny. I liked the servants at the duke’s Mayfair home. They were always plotting some way to get Emma and Ash to fall in love, hoping Ash would stop being so grumpy if that happened.

There were three, if I remember correctly, explicit sex scenes in this book and the F-bomb was used 5 times.

As to the narration: If it hadn’t been for Mary Jane Wells’ narration I don’t think I would have enjoyed this book nearly as much as I did. Her voices were fantastic but she read with the best emotions I’ve ever heard. The laugh out loud moments were made funnier by the narration. This was a 10 star narration. My new favorite female narrator.