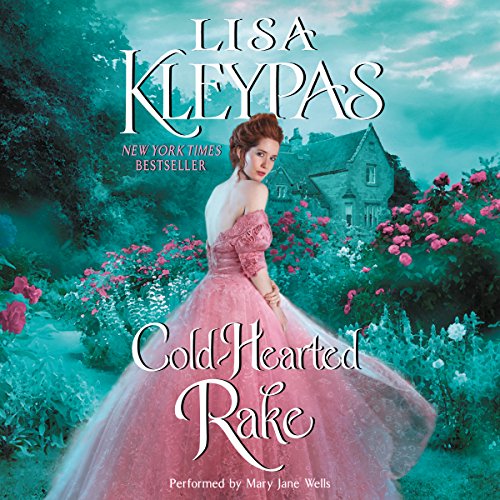 Lisa Kleypas is back with a stunning new historical romance!

Listeners have long waited for the return of New York Times best-selling author Lisa Kleypas to historical romance - and now she's back with her most breathtaking yet.

Devon Ravenel, London's most wickedly charming rake, has just inherited an earldom. But his powerful new rank in society comes with unwanted responsibilities...and more than a few surprises. His estate is saddled with debt, and the late earl's three innocent sisters are still occupying the house - along with Kathleen, Lady Trenear, a beautiful young widow whose sharp wit and determination are a match for Devon's own.

Can she keep from surrendering her heart to the most dangerous man she's ever known?

I sidled up to this one with a bit of caution -- initial reviews were not glowing. Imagine my delight to discover not only is this a great book (Kleypas, duh) -- but it's a new kind of Kleypas novel. In fact, it felt more like a Jennifer Ashley "Mackenzie" novel, without the Scots twist, but with a seriously sexy hero, and a challenging love story.

I love reading reviews on here, and reviewers have saved me from some stinkers, but the initial reviews on this book -- in hindsight -- are perplexing. I'd say if you like either of those authors, give it a try.

Mary Jane Wells was wonderful here, as well. Her voice for Devon was a steamy revelation!

Highly Recommended -- by me!

Glad I ignored the bad reviews!

I lost sleep - kept having to restart my sleep timer.

Narrator is GREAT!! Her Devon is sexy (which is sometimes hard to pull off with a female narrator)

Devon doesn't become a love sick following behind puppy. Kathleen isn't a fainting miss. Both are strong willed and stubborn - they work! The relationship doesn't slowly blossom - it was a bit abrupt - but then it was a small roller coaster ride.

Worth a credit - I'm already into book 2 and spending my next credit on book 3!

If you could sum up Cold-Hearted Rake in three words, what would they be?

What was one of the most memorable moments of Cold-Hearted Rake?

There are just too many memorable moments in this story, from the initial meeting of the two, their slow-burning attraction, but the time he told her he loves her and was giving her time to accept that love and would be faithful to her from that moment on, that was such a memorable speech and moment.

This one:
“Time is what I'm giving you," he said, staring down at her. His hand curved beneath her chin, compelling her to look at him. "There's only one way for me to prove that I will love you and be faithful to you for the rest of my life. And that's by loving you and being faithful to you for the rest of my life. Even if you don't want me. Even if you choose not to be with me. I'm giving you all the time I have left. I vow to you that from this moment on, I will never touch another woman, or give my heart to anyone but you. If I have to wait sixty years, not a minute will have been wasted- because I'll have spent all of them loving you.”

Devon holding Kathleen as she cries for the first time was heart wrenching.

I adored the narration! From now on, I'm on a lookout for Mary Jane Wells's narration :)

I Thoroughly Enjoy Her Humour

This may not have been the strongest storyline ever, but I love her humour and her writing. .

West's social comment about workers gave me the chillls:
“I’ve heard that hat making drives people mad,” Pandora remarked. “Which I don’t understand, because it doesn’t seem tedious enough to do that.”
“It isn’t the job that drives them mad,” West said. “It’s the mercury solution they use to smooth the felt. After repeated exposure, it addles the brain. Hence the term ‘mad as a hatter.’ ”
“Then why is it used, if it is harmful to the workers?” Pandora asked.
“Because there are always more workers,” West said cynically.

The narration was wonderful.
I've already pre-ordered the next book in the series, Marrying Winterbourne.

Still the best historical romance writer out there

Where does Cold-Hearted Rake rank among all the audiobooks you’ve listened to so far?

Devon or his brother...maybe the twin with issues.

What about Mary Jane Wells’s performance did you like?

Book's not that good, but...Mourning in Hampshire.

I have read a bizillion historical romances. Lisa K hits all the highlights of the genre. 1. She always has great historical details and explains what is going on in the era. 2. Her humor is really clever. 3. hot romance. Other elements are a plus such as great camaraderie and deep insights into the human condition, but I can do without them if the above 3 are in place. This was a decent story that satisfied my basic needs in a romance novel. I haven't quite finished it; I figure it is the first of a new series.

One of the better written books by LK

This book is one of my favorite books by LK in the writing sense. Very well written and clever. Characters were developed nicely and the change in personalities was also very well delivered as the story took shape. My only disappointment? Well I hate an unfinished ending. Forces one to wait for the next book to determine what the fate of the characters involved truly is. Other than that I LOVED this book

The performance was fine. Mediocre. The sex scenes were predictable. I kept waiting for intrigue, mystery, something to captivate and propel the story line forward, but I was disappointed. The heroine desperately wants to be her own person, but the moment the man comes around, she melts into a whiny, fainting, weak girl who can’t say no to this “big strapping male.” Ugh.

To be honest, by the end of the book I really disliked the main female character. She was very headstrong (in a pushy sort of negative way) and seemed to care more about her own view of her surroundings and how things "should" be and never really allowed for other people's opinions or circumstances.

The way she handles her sister in law's engagement really irked me. She was very judgmental and I could not really understand why the main hero, who did a lot of soul developing throughout the book (from cad to champion), was attracted to her.

I was more enthralled by the romance between Helen and the coarse and rediculously wealthy Mr. Winterbourne. I will definitely be purchasing that audiobook next so this author did pull me into the story of he Ravenell family.

Not a wholly bad listen but had I known then what I know now I would have skipped this book and gone straight to Marrying Mr. Winterbourne.

good, but far from her best

What made the experience of listening to Cold-Hearted Rake the most enjoyable?
The characters were strong, very clearly drawn so I had a clear understanding of what drives them. The descriptions were also detailed but not tedious...not always an easy thing to do.

What did you like best about this story?
I liked the younger brother best as far as characters went. He was funny and engaging, but all too human as well.

What about Mary Jane Wells’s performance did you like?
I thought she did a very good job, and her accents, for the most part, were convincing.

Any additional comments?
I found the H/h to be rather unlikable. They were both prickly and mistrustful. There wasn't much to draw them together except physical passion. Maybe I missed it, but there was no spark of love (not lust) between these two, and no blissful, weepy moment at the end. I really missed Kleypas's usual humor in this book. It's much darker than her other historicals, IMO. I've missed her historical romance, and so I've been looking forward to this for months. I was more than a little disappointed by this book...it's not as engaging as the Hathaways series or the Wallflower series. Still, it's better than most of other authors historicals, so I give it a solid four stars.

This was a sweet story. Devin is a jerk with a loser brother, Weston. Devin inherits the Ravenell estate even though he and his loser brother dont want it. The estate, however, saves the loser brother and gives him purpose as well as making Devin see a softer side of life. Kathleen and her three sisters in law are anticipating being abandoned, however the werent, and got much more than they thought. I always enjoy a book where the main couple is working towards a relationship without a bunch of chaos getting them there... this was one of those. There were obviously obstacles, but nothing thst made you feel pain.

I also really like how in this one book, we can so clearly see all the potential upcoming stories. I hope we'll see Westons story as well as the girls' stories. I am actually going right into the next book &amp;quot;Marrying Winterbourne&amp;quot; which is something I very very rarely do.

It always takes a bit to get used to the narrator, no matter if theyre new or familiar. MJW was new to me and her reading style even newer. She is the first narrator that I can recall actually 'acted' as well. She would sigh when the character sighed, or whine, or cry or be angry... It took a little over halfway for me not to cringe. She obviously put in a lot of effort, and once I got used to it, I quite liked it. She did a great job on the various voices and keeping track to not mix them up. (I would love to know how the narrators do that so well!)