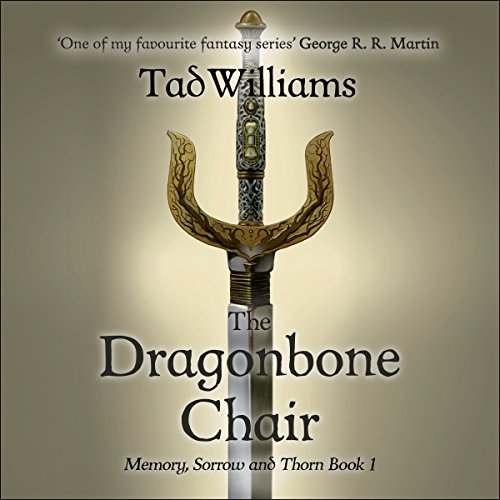 Kitchen-boy Simon is bored, restless and 14 years old - a dangerous combination. It seems, however, that his life has just taken a turn for the better when he's apprenticed to his castle's resident wizard. As Simon's learning to read and write under Doctor Morgenes' tutelage, forces greater than he could possible imagine are gathering: forces which will change Simon's life - and his world - forever.

Following the death of Good King John, Osten Ard is plunged into civil war as his sons battle for control of the fabled Dragonbone Chair - the country's throne as well as the symbol of its power. Simon is forced to flee the only home he has ever known, a journey which will test him beyond his worst nightmares.

With The Dragonbone Chair, Tad Williams introduced readers to the incredible fantasy world of Osten Ard and kicked off the beloved, internationally best-selling series Memory, Sorrow and Thorn.

A word of caution.

First, let me say that the world, plot and narration are all excellent. However, it falls short were it truly matters, the main character. The kitchen boy, Simon, is naive, clumsy, willful, selfish and stupid. He lacks any virtue that I can admire, nor is he being mistreated in any way that would allow me to feel either pity or riotous indignation on his behalf. Also, he has no strong motivation to drive him.

In short, he should not have been the main character.

It feels like the actual story is happening to the side with all the rich and intriguing characters all taking part. And we, the listeners, only get a glimpse of it, the few times Simon happens by to eavesdrop. The rest of the time its just the boy feeling bad for himself or getting a lecture on the history of the world.

(Dropped a the 12 hour mark. Couldn't take it anymore.)

This is a traditional fantasy epic, but unlike many from its era, it derives much of its inspiration from the original European mythology, and not Tolkien's interpretation. Here we have fair elves, but they are much more savage and alien than those of Tolkien.

While the story is a somewhat cliched kitchen boy's journey to power, it is a cracking yarn that I found to have a good mix of action, suspense and intrigue.

What does Andrew Wincott bring to the story that you wouldn’t experience if you just read the book?

Love the accents for the different cultures on show. Andrew mixes the standard British English accents with Welsh, Norse and Scottish, among others.

Where does The Dragonbone Chair rank among all the audiobooks you’ve listened to so far?

It ranks up near the top. I love this novel and I really hope the entire Memory, Sorrow and Thorn trilogy is made available by Audible.

What other book might you compare The Dragonbone Chair to and why?

A Song of Ice and Fire by George RR Martin
The Riftwar Saga by Raymond E. Feist

Have you listened to any of Andrew Wincott’s other performances before? How does this one compare?

I don't normally focus on narration unless it is especially awful. The narrator did a great job and I'd be happy to hear him voice any further novels in the series.

Read or listen to books - don't watch movies.
Theater of the mind - use it!

I'm not normally a HUGE fan of fantasy because often the authors of big fantasy epics get bogged down trying to fill a huge world with hundreds of characters and their stories.

Tad William's keeps a tight narrative focus and only expands on the stories of other characters when it pushes the over arching plot forward. It's an amazing trick to pull off - there ARE other stories in here besides Simon's - but they never seem unnecessary and they always add to the over arching plot rather than being distracting word bloat.

When you've finished this novel you'll be aching for the next installment. I promise you.

A slow start but rewarding completion

This first book in the series “Memory, Sorrow and Thorn” is a opening to an epic and very intriguing tale of young Simon and how he goes from being a kitchen boy to a hero in many tales.

This series as a whole I would rate among the best books I’ve ever listened to, without doubt and it’s definitely worth reading/listening to. However, among these books I would rate this, the first one, the lowest because it has such a slow start, I vaguely remembered what happened the first 10 hours of this book. But if you can power through that, you have 4 books (plus 3 more) of absolute amazing adventure and heart filled moments that I personally will never forget. The series keeps gradually getting better the more you get into the thick of it.

It’s clear that this is inspired by many fantasy writers, especially Tolkien. There’s a lot of information to take in, a lot explaining and a lot of thinking. That’s why I only recommend a series like this to someone who’s really determined to have a grand story told to them with a lot of viewpoints. If you’re more into quick paced and simpler told stories, this perhaps is not for you.


My ratings for the books:

excellent narration. Andrew brings the characters to life in a way that fits so well

GRRM said it was the inspiration for Game of Thrones. What else needs to be said?

He read them all really well but Binabik was done just perfect.
Tiny complaint: he mispronounces Osten Ard.

Once you got into it you won't stop listening.

I read about 10-11 hours, keeping up the hope that the story would get better at some point but it just drags on, slowly. I am sorry but I am going to return this one.

I may be the wrong person for this story as i can not stand small children and their quirks and if whoever reads this is in the same boat, then i can not recommend this to you
I already read some comments about a slow start, but after 8-9 hours of listening to a 3 year old trapped in the body of a 14year old boy i simply refuse to torture myself any longer, no matter how good it may or may not become. I had high hopes that the mc will start getting better, not trow a mini tantrum every 5 seconds when he does not get what he wants, like a child that got his sweets denied at the cash register, but no its just goes on and on endlessly. The never ending questions and the fact that he is incapable to do even the most simple thing he is told to doe does not help at all.
The story outside of the mc was good so far if a bit slow, but i just cant bear the mc any longer.

Narrator is a catastrophe

I tried. Really. I gave this audiobook serveral shots, because a friend told me, the story is worth it. I only made it 2/3 trough.

Cause is not the story itself, which is ok, but the narrator. Over the years I have listened to many, many audiobooks and never have I experienced an narrator who actively lessens the experience. His accentuation, pacing, his voices for the different characters. All these things miss the mark and distracted me from the story itself. At times I got really annoyed and couldn't believe this production got greenlit.

I'm sorry to stop the audiobook here. Fortunately I can switch to another language and hope, that the German translation and narrator are doing a better job.

Great reading of a great book!

This is an excelent reading of a great book! The story starts a bit slow, like most epic fantasy stories do, but the plot and the characters are well thought out and I found I couldn't stop listening. The reader of the audio book is a master of the art, the voices are unique and the accents of the different people distinct to the point where you can tell what part of the fictional Osten-Ard a new character is ment to come from!

It's one of the best audio-books I have ever listened too and I can only highly recommend!