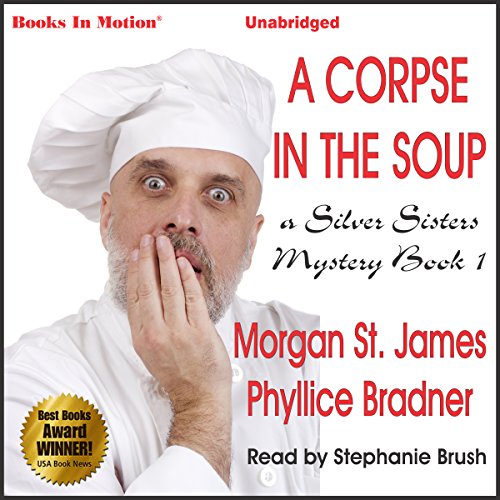 The Corpse in the Soup

When Godiva winds up in the hospital after being poisoned on a TV cooking show, her twin sister Goldie hops on an Alaska Airlines plane and rushes to her side. The sisters' zany romp through the world of celebrity TV chefs begins when Goldie's daughter Chili is hired by the star of the show. Rivalry turns to murder in the midst of the glitzy Gourmet Gladiators Tournament . The cops arrest Chili's new boss, Chef Caesar Romano, but Godiva has other plans for the handsome chef, and Goldie doesn't want her daughter to lose a chance at stardom, so the twins set out to prove that he is innocent. Their Jewish mother and grumpy uncle-former vaudeville magicians-help them stir the pot, but in the end Goldie and Godiva find themselves in some very hot water.

This book completely surprised me. I was literally judging a book by its cover - I didn't listen to this for a long time because I thought it would be cheesy. I was totally wrong! It was so funny, and the characters are a riot. I love the "talking" dog, and all the silly names. I am downloading the next one in the series, and am hoping all the rest will be made into audiobooks!

What did you love best about The Corpse in the Soup?

What was one of the most memorable moments of The Corpse in the Soup?

Hard to say! It was fabulous from beginning to end!

Have you listened to any of Stephanie Brush’s other performances before? How does this one compare?

Don't think so. But I must say that she is one of the best yet of all my years of audio books!

The whole thing was hilarious! Reminded me of some of the great slap-stick comedies! Masterful writing!