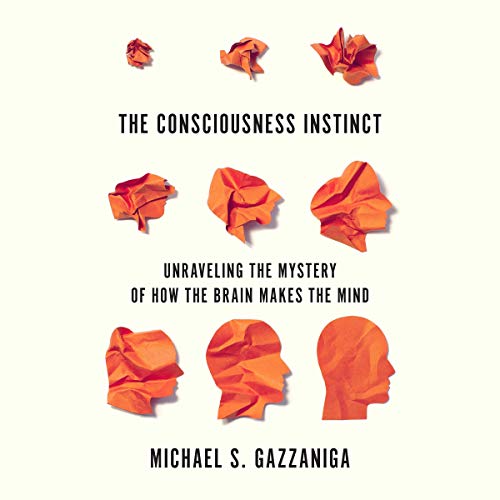 “The father of cognitive neuroscience” illuminates the past, present, and future of the mind-brain problem

How do neurons turn into minds? How does physical “stuff” - atoms, molecules, chemicals, and cells - create the vivid and various worlds inside our heads? The problem of consciousness has gnawed at us for millennia. In the last century there have been massive breakthroughs that have rewritten the science of the brain, and yet the puzzles faced by the ancient Greeks are still present. In The Consciousness Instinct, the neuroscience pioneer Michael S. Gazzaniga puts the latest research in conversation with the history of human thinking about the mind, giving a big-picture view of what science has revealed about consciousness.

The idea of the brain as a machine, first proposed centuries ago, has led to assumptions about the relationship between mind and brain that dog scientists and philosophers to this day. Gazzaniga asserts that this model has it backward - brains make machines, but they cannot be reduced to one. New research suggests the brain is actually a confederation of independent modules working together. Understanding how consciousness could emanate from such an organization will help define the future of brain science and artificial intelligence, and close the gap between brain and mind.

Captivating and accessible, with insights drawn from a lifetime at the forefront of the field, The Consciousness Instinct sets the course for the neuroscience of tomorrow.

From Wikipedia "Michael S. Gazzaniga is a professor of psychology at the University of California, Santa Barbara, where he heads the new SAGE Center for the Study of the Mind. He is one of the leading researchers in cognitive neuroscience, the study of the neural basis of mind." In his book "The Consciousness Instinct," prof Gazzaniga attempts to explain how the brain (a network of neurons) makes mind (consciousness). Unfortunately, he fails. He makes two major mistakes. First, he makes an analogy to quantum mechanics and the notion of duality, in which elementary particles can be interpreted as either a wave or a particle. He uses a quote by Richard Feynman "I think I can safely say nobody understands quantum mechanics," as justification to say that brain and mind are a type of quantum duality. There is no justification in the physics literature for this assertion. Because it is difficult to understand quantum mechanics, it doesn't mean that one can simply make up physics and call it quantum mechanics. He goes on to state that the chemical reaction that govern the chemistry nonliving things is different than the chemistry that governs living things. This idea of "vitalism" was disproved in the first half of the 19th century. Instead, I recommend "What Is Life?: How Chemistry Becomes Biology", by Addy Pross, "Consciousness and the Brain: Deciphering How the Brain Codes Our Thoughts," by Stanislas Dehaene, and "Consciousness: Confessions of a Romantic Reductionist," by Christof Koch.

Consciousness through the lens of Neuroscience

Michael Gazzaniga is at the forefront and a leading scientist and researcher in cognitive neuroscience. His work on split brain patients has changed out concept of the mind within the brain, and our perception regarding identity.

In this context his attempt to provide a hypothesis on consciousness can be described as the closest science can come to explaining the Hard Problem of Consciousness.

The book takes us through a history of philosophy and science relating to the mind and the brain the dualism of Descartes, the reductionism schools and modern science, the quantum world of complementarity, and finally the authors proposal as to what the mind is and how it relates to the brain.

The author brings a new perspective to consciousness, one that accepts the possibility of a subjective system that cannot be reduced producing qualia analogous to other instincts. He proposes consciousness as an instinct evolving out of necessity to improve our survivability in complex situations. A continuum which he suggests is very likely present in different ways and degrees in all living things.

This book is highly recommended and a must read for anyone interested in the subject.

Audible narrators are usually excellent. This narration was almost painful to listen to. This is a shame as Gazzaniga is an excellent writer.

I heard him giving the Gifford Lectures

This is an amazing book that untangles great swaths of evolutionary neurobiology. Wonderful clear speaker

An interesting and compelling idea, but slow start

This book contains a compelling model to help visualize the author's idea of consciousness, but the interesting model doesn't appear until nearly the end of the book. In the meantime, most of the text (about half) is spent proving that creationists are wrong, a job which is better done by authors who do it by proving that evolution is correct (I recommend, for example, Darwin's Dangerous Idea).

An amicable introduction to modern neuroscience

Without exploring neuroscience research in depth, this serves as an excellent theoretical overview. I suggeat this to any undergraduate interested in biology, neurology, psychology, or how these could relate to engineering.

A fantastical overview of conscious thought

The more I learn about the human mind, the more it absolutely amazes me. This book is in deservance of a thunderous applause.

Linda F Barrett like this author is hit with FAKE REVIEWS !!
Linda s incredible book has the exact attacks.

this book takes you for a deep dive in to the human mind structure and explains in detail every building block in it , fascinating journey!

worth the read for discussion of consciousness

Summary analyses of Hume and Descartes are materially incomplete and inaccurate; fails to properly distinguish symbolism from natural residue and worldly represention in discussion of cell's reproductive machinery; however, discussion of consciousness otherwise is ℹ️ and useful. Definitely worth the read.