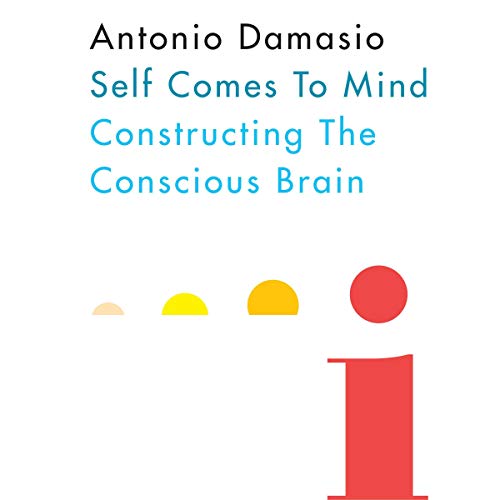 Self Comes to Mind

Self Comes to Mind is a nuanced and original chronicle of the evolution of the human brain. It reveals how the brain's development of a self becomes a challenge to nature's indifference and opens the way for the appearance of culture, a radical break in the course of evolution.

Damasio views brain development through the lens of biological evolution - starting with the simplest organisms that exhibit elaborate life regulation devices but do not require brains. The arrival of neurons, possessed of the unique ability to transmit and receive messages, allows neurons to organize themselves in complex circuits and networks, networks that serve to represent events occurring in the body, influence the function of other cells, even their own function. In this framework, the distinction between body and brain is blurred - the neurons that make up the brain and eventually generate the mind are body cells and are perpetually connected to the body.

Neurons are the producers of mind states. And in the increasing complexity of the patterns in which neurons organize themselves is to be found at once the mystery and the clues to the myriad ways in which the brain operates.

The systems of neurons that govern life in the interior of a body - the process of homeostasis - are first assisted by reflex-like dispositions, and eventually by images, the basic ingredient of minds. But the flexibility and creativity of the human mind do not emerge from images alone. They require images to create a protagonist, a self capable of reflection. Once self comes to mind, the devices of reward and punishment, drives and motivations, and emotions can be controlled by an autobiographical self, capable of personal reflection and deliberation. The reflective self becomes a rebellious apprentice to nature's indifferent sorcerer. It uses expanded memory, language, and reasoning to create the very possibility of culture.

"Exquisite… Readers fascinated from both a philosophical and scientific perspective with the question of the relationship among brain, mind, and self will be rewarded." ( Publishers Weekly)

Some important and amazing stuff in this book!

I can’t imagine a better author to take this subject matter on.

Damasio’s offerings about the genesis of the conscious self are both comprehensive and remarkably clever. He offers lots of justifications for why we construct our sense of self the way we do. Those justifications and explanations seem to arrive at the perfect time in the dialog. It seems Damasio knows and anticipates the readers reaction to each of the new cutting-edge assemblage he creates for us. Just as my mind would stall with one of those - “Yeah, OK, but what about … ?”, he anticipates and addresses my ego's reactive inquiry in the very next paragraph. I found that to be very thoughtful and considerate in a technical publication. It went a long way to keep my ego out of defensive mode and in a more focused learning mode.

I must admit that I did choke on a few of his choices of very large compound words, some of his own design, in a gratuitous fashion. “I get it Antonio, you’re brilliant… now stop it [Smack], I don’t need any extra sizzle from you, I’m totally here for the steak my friend.”

The book is dense with technical content which was useful, delightful and challenging at times. It’s the type of challenge that gives me that feeling of accomplishment when I discover something I could not conceive of before. So it was all good. There were some noticeable places where the narrator was not entirely grasping what he was reading. He would place emphasis on the wrong part of a phrase and I had to play it over in my head several ways with different emphasis before it made sense in context.

I would imagine this book will become a very important body of work as more and more people realize the value in knowing how their own, and each other’s stuff works “under the hood”. 5 Stars by a mile. Thank You Mr. Damasio!

Not quite an answer to the questions it raises

If you are not already familiar with Damasio's work, this is a great introduction, and one that does a solid, concise job of covering both basic concepts and neurophysiological details. He does a terrific job of closing some of the gaps in previous accounts of how intentional decision making and reasoning work, but his goal of explaining how self comes to mind is unreached. What David Chalmers calls the Really Hard Problem of consciousness remains a "smooth-walled mystery," as Patricia Churchland would put it -- there are no handholds here. If you want a good functional account of how self works, however, this is a great read.

I am giving this five stars...

because it is very well written, has a lot of good information, and because it is well-done science--but...the author's assertion at the first of the book that this is a "new" approach to consciousness theory simply isn't true. The first theory of consciousness that I ever read was Freud's: that the reflexive "mind" that came all the way up from struggling single cell organisms (ID) was passed onward to more complex beings and developed self-awareness (Ego) in order to better achieve homeostasis, and was then passed on to beings even more complex, developing social consciousness (Superego) in order to interact with other Egos so all could better achieve homeostasis while working together. Now if you haven't read Freud's treatise on consciousness, Damasio's work could seem groundbreaking, as he seems to want to assert, but it is really not much more than Freud's theory of the development on consciousness supported by the new discoveries of neuroscience. Again, a well-written, very informative book, but it is hardly a "new start" in regard to studying the evolutionary development of consciousness. Sigmund had Damasio beaten by a good hundred years on that one, and without the aid of our current knowledge in the realm of neuroscience.

If you read Descartes’ Error, then you already know what Antonio Damasio can do with technical and philosophical material. In Self Comes to Mind, he applies current neuroscience to the area of human consciousness. Along the way, the reader is introduced to what that research is saying about how we think, provides new insights into history and the development of art and culture. Yes, there are some technical terms here, but nothing that the novice cannot understand. Professionally trained individuals may find fault with portions of the book. This is not the only book which the interested amateur will be reading. However, it is just enough to help the uninitiated a basic of understanding of human consciousness. Antonio Damasio has done a beautiful job. The reading of Fred Stella is good.

Speaking about the nature of the self, Damasio seems unable to say you, me, we, Or I. He plods along an endless path of antique three and four syllable words for no useful purpose. Ten or fifteen minutes into this book, he was still tirelessly explaining that the self is an object or thing and is aware of its existence. This book could provide amazing insights and understanding into the nature of the self. Instead, it endlessly pontificates about talking about almost talking about the self.

It my be me, or the writing, or the narrator, but I found it nearly impossible to focus on this book. I am fascinated with the topic but my mind kept wandering off, which is usually not a problem for me. Shrug. I'll have to get the hard copy.

Not sure that I can pinpoint what is wrong it is not the quality of the audio that is bad but, more of a collaboration of the speaker and the text. I just cant follow or keep my attention on this book it sounds like it's all one continuous run-on sentence. Also the speakers voice has depth or conveyance of the text to distinguish when something ends or begins and whether it important or not.

I gave up half way though the first part.

I found it was partly difficult to absorb, but the philosophical ideas were interesting, especially in the last hour. I’m SO GLAD it wasn’t a pretentious sounding British guy reading it.

Way too simplistic. Found it painful to listen even with many fast forwards. i was expecting some new information.

Very interesting explanation for the synthesis of human consciousness and the elements responsive for memories and feelings. A very good read.