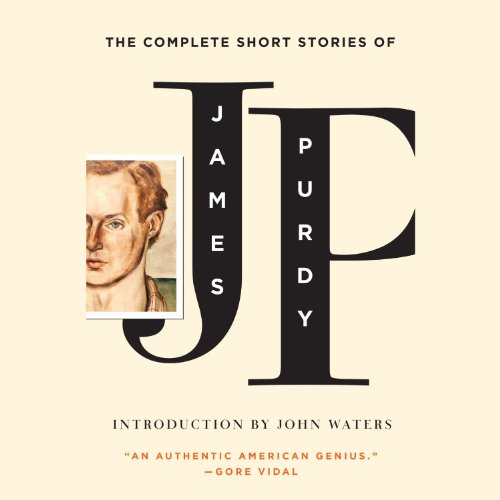 Celebrate "an authentic American genius"(Gore Vidal) in James Purdy's first complete short story collection. The publication of The Complete Short Stories of James Purdy is a literary event that marks the first time all of James Purdy's short stories - 56 in number, including seven drawn from his unpublished archives - have been collected in a single volume. As prolific as he was unclassifiable, James Purdy was considered one of the greatest - and most underappreciated - writers in America in the latter half of the twentieth century. Championed by writers as diverse as Dame Edith Sitwell, Gore Vidal, Paul Bowles, Tennessee Williams, Carl Van Vechten, John Cowper Powys, and Dorothy Parker, Purdy's vast body of work has heretofore been relegated to the avant-garde fringes of the American literary mainstream.

His unique form and variety of style made the Ohio-born Purdy impossible to categorize in standard terms, though his unique, mercurial talent garnered him a following of loyal readers and made him - in the words of Susan Sontag - "one of the half dozen or so living American writers worth taking seriously." Purdy's journey to recognition came with as much outrage and condemnation as it did lavish praise and lasting admiration. Some early assessments even dismissed his work as that of a disturbed mind, while others acclaimed the very same work as healing and transformative. Purdy's fiction was considered so uniquely unsettling that his first book, Don't Call Me by My Right Name, a collection of short stories all reprinted in this edition, had to be printed privately in the United States in 1956, after first being published in England.

Best known for his novels Malcolm, Cabot Wright Begins, Jeremy's Version, and Eustace Chisholm and the Works, Purdy captured an America that was at once highly realistic and deeply symbolic, a landscape filled with social outcasts living in crisis and longing for love, characterized by his dark sense of humor and unflinching eye. Love, disillusionment, the collapse of the family, ecstatic longing, sharp inner pain, and shocking eruptions of violence pervade the lives of his characters in stories that anticipate both "David Lynch and Desperate Housewives" (Guardian). In "Color of Darkness," for example, a lonely child attempts to swallow his father's wedding ring; in "Eventide," the anguish of two sisters over the loss of their sons is deeply felt in the summer heat; and in the gothic horror of "Mr. Evening," a young man is hypnotized and imprisoned by a predatory old woman. These stories and many others, both haunting and hilarious, form a canvas of deep desperation and immanent sympathy, as Purdy narrates "the inexorable progress toward disaster in such a way that it's as satisfying and somehow life-affirming as progress toward a happy ending" (Jonathan Franzen).

It may have taken over fifty years, but American culture is finally in sync with James Purdy. As John Waters writes in his introduction, Purdy, far from the fringe, has "been dead center in the black little hearts of provocateur-hungry readers like myself right from the beginning."

I so enjoyed this listen!

If you could sum up The Complete Short Stories of James Purdy in three words, what would they be?

So many narrators - some brilliant - some getting carried away and "acting" the characters, which in these stories always got in the way.

Who was the most memorable character of The Complete Short Stories of James Purdy and why?

There was not one story that wasn't worth the listen. What a brilliant writer - why am I just now discovering him? So glad I have.