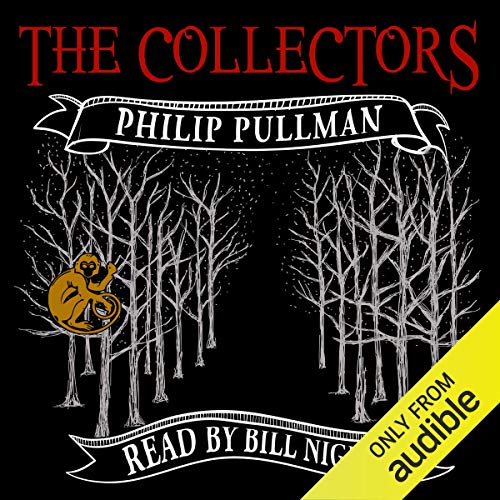 "But the thing is," said Horley, "they didn’t know each other at all. Never heard of each other. It wasn’t about the makers. Only about the works."

On a dark winter's night in 1970, Horley and Grinstead huddle for warmth in the Senior Common Room of a college in Oxford. Conversation turns to the two impressive works of art that Horley has recently added to his collection. What the two men don't know is that these pieces are connected in mysterious and improbable ways; and they are about to be caught in the cross-fire of a story which has travelled time and worlds.

Philip Pullman is one of the most well-loved and admired British authors of the last few decades. He has written numerous novels for both adults and children, most notably the award-winning His Dark Materials trilogy. The Collectors, written exclusively for Audible, serves as a great introduction to this series, while revealing a little something extra to fans of Lyra and her world.

The Collectors is narrated by Bill Nighy, the Golden Globe and BAFTA award-winning actor whose work on stage, screen, and radio has included Love Actually, the Pirates of the Caribbean series and a multitude of TV, stage, and radio appearances.

"Pullman's brief story is a little marvel, and so is Nighy's reading. His narration is so natural, complete with signature Nighy stutters, and his voice so rich and resonant that listeners are immediately ensnared." (AudioFile)

A nice little appetiser to bring you back to the world of His Dark Materials. Not really the best sort of thing to introduce you to the other books, but certainly of interest to those who have read and loved them.

The low score in performance was due to the extremely bad mixing that causes the performer's voice to be nearly inaudible during a good few of the lines of one of the two main characters. I certainly hope it can be updated and fixed to better volume balance, as the performance is excellent otherwise.

An Oxford common room, a feeble fire: strangers meet over port, a tale is told, a transaction fixed, a dreadful act ensues. This is a classic 19th century horror story, told with Pullman's characteristic wit and grace. The bonus is the tangential glance at a character we grew to know well in The Golden Compass.

Bill Nighy's narration is superb, of course -- but perhaps more "actorly" than quite comprehensible. He falls into near-whispers occasionally: dramatically appropriate but hard to follow on a freeway, with a lot of ambient road noise.

This is a must especially since it's only a couple dollars. I wasn't lucky enough to get it free as some members were. However.... it was well worth it. The only con I can find is it's so short! I could've listened to this story for hours especially read by Bill Nighy! Seriously one of my all-time favorite narrated (& performed) audio books.

A Tidbit From His Dark Materials

This is just a tiny tidbit of a story. Well, not really a story, more like a very brief anecdote, that tangentially involves His Dark Materials. It's kinda fun, but also not very substantial, more of a tease. Wish there was more to get excited about.

Interesting addition to the universe

This short (30 mins) is different than all the other parts of His Dark Materials in several ways. 1) it is not read by Philip Pullman and cast; there is one narrator, and he is not the author. 2) The characters in this are not from any other part of the story (where Once Upon a Time in the North revisits Lee & Hester and Iörek, and Lyra's Oxford returns to Lyra and Pan). 3) I'm not even sure that the world it takes place in is necessarily one that the other stories connects to.
Still, a reasonable read, all things considered. Perhaps something a reader may choose to miss if they aren't devoted to complete-ism when it comes to extras and shorts, but likely something a fan will want to make a point of reading, even though it is considerably different than the rest of the series in all the above ways.

Was great, except the audio went from too low to hear when narrating and then to too loud during dialogue.

I was a bit confused about this piece. I am not sure what I thought this was but it turned out to be a vignette about characters from the Dark Materials. The narration was excellent if a bit on the quiet side - which made listening challenging. The plot was good and eventually I realized what was happening but overall I was left wanting more - more story. If you are looking for a piece to immerse yourself in this is not it. It is a short story.

Where does The Collectors rank among all the audiobooks you’ve listened to so far?

I'd say it was in the top percentile, probably at the highest for now.

What was one of the most memorable moments of The Collectors?

The ending is the payoff!

Have you listened to any of Bill Nighy’s other performances before? How does this one compare?

No, never have but I look forward to hearing more from him.

Made me laugh in parts but more stunned at the ending.

Anticipating The Book of Dust!

Disturbing backstory for His Dark Materials series. Narration is fabulous I highly recommend The Collectors and all of Pullman's work

It should have been free

The story and the performance are outstanding, I CANNOT wait to read the series. Boy was I disappointed when I realized I'd used a credit for a half hour book...

should not charge full credit for a 1/2 hour of audio. guess you got us all good on that one..

simply wonderful, both the story and the way bill nighy brings it across. it is pretty short, but still a pleasure to be drawn back into the dark materials universe

Love the story and adored the narration. Shame only that it was so short.

It is an enjoyable bit of a story for those that have read about Lyra's world and just want another short look. Seen by itself I do not think it would be interesting.

Very enjoyable Ghost Story set in an English college reminding me of the works of M. R. James.

The Collectors (His Dark Materials, #0.6)

The Collectors (His Dark Materials, #0.6)

According to Pullman, he originally wanted to write a classic ghost story, and it was Audible's idea to have the story connected to His Dark Materials. The combination worked out quite well. "I conceived the idea of these two art collectors and their coming briefly into contact with one of the characters I always liked writing about, namely Mrs. Coulter," Pullman says. "And no one can meet Mrs. Coulter without being damaged."

I enjoyed it and it resembled me after E A Poe.
But there are better short-stories.