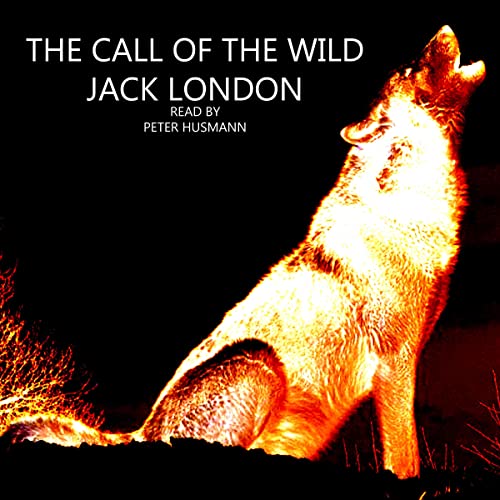 The Call of the Wild

Jack London's masterpiece, tells the gripping tale of a dog named Buck who is wrenched out of his life of ease and luxury to become a sled dog in Alaska. Drawing on his wolf heritage, Buck must fight for survival in an alien environment.

I might have read 'Call of the Wild' in high school--I can't remember. If I did, surely I dismissed it as bothersome homework that wasn't as exciting as video games.

Two-plus decades later, I now find COTW way more exciting than video games. London's delivery is just great, following the trials of Buck and his indomitable spirit from California ranch dog to Alaskan free-range wolf. From the violent gold-rushers to the disciplined postal routes to the ignorant family and the love of John Thorton, every episode is a slice of the human condition--for better or worse--creatively told from the canine perspective.

The production of this title is very poor--the spliced recording has seams and the fidelity of the narrator has too much bass--but the narrator (Munro? Husmann? Artwork and metadata have conflicting information) does have moments of excellence: the scenes of Dave's death and the snowshoe rabbit rise to the top.

"There is an ecstasy that marks the summit of life, and beyond which life cannot rise. And such is the paradox of living, this ecstasy comes when one is most alive, and it comes as a complete forgetfulness that one is alive. This ecstasy, this forgetfulness of living, comes to the artist, caught up and out of himself in a sheet of flame; it comes to the soldier, war-mad on a stricken field and refusing quarter; and it came to Buck, leading the pack, sounding the old wolf-cry, straining after the food that was alive and that fled swiftly before him through the moonlight. He was sounding the deeps of his nature, and of the parts of his nature that were deeper than he, going back into the womb of Time. He was mastered by the sheer surging of life, the tidal wave of being, the perfect joy of each separate muscle, joint, and sinew in that it was everything that was not death, that it was aglow and rampant, expressing itself in movement, flying exultantly under the stars and over the face of dead matter that did not move." --Jack London, Call of the Wild

This book is a simple, terrific introduction to American literature and deserves a better recording. But hey, I found this on Audible for 50 cents--it was pocket change well spent.

unlistenable...the reader has a pleasant, deep voice but he whispers like he's trying to put a child to sleep. I was unable to fully understand what he was saying.

great story, but not the best narration

really liked this book. the narration was not the best, but for the price I'd listen to Richard Simmons read it.

Jack London's incredible story of Buck and his adventures in the Alaskan wilderness a classic for very good read. This should be required reading for anyone who loves dogs, or just animals in general as you'll definitely look at nature differently afterwards. I really can't recommend this highly enough.

That said, this audio performance leaves a lot to be desired. Alan Munro rarely strays from a dull monotone and has a naturally raspy voice. That, coupled with a poorly edited recording makes parts of this very hard to follow. Do yourself a favor and read this instead listening to it. It's too good a story for anything to stand in your way.

Portrait of the Arctic and a Young Dog

I once wrote a story from the point of view of a dog that was rejected because, I was told, readers don't go for anthropomorphism. Jack London's famous novel, an American classic, is an anthropomorphic tale, and having read it now for the first time, I call bullpucky on that editor. Maybe my story wasn't good enough, but readers love anthropomorphism, especially when it's about the animal they love most: dogs.

Based on his own experiences in the Yukon territory, and based on a friend's dog, London's short novel tells the story of Buck, a pet who is stolen and sold into servitude as a sled dog during the Klondike gold rush of the 1890s. He meets bad people, he meets desperate people, he meets good people. He fights off other dogs, and evolves from a house pet to a powerful work dog and, ultimately, hears the call of the wild.

You can easily read this as a straightforward adventure story, or if you are so inclined, you can read in tons of symbolism, allegory, and philosophy (primitivism, pastoralism, Darwin, whom London read during his year in the Yukon, Nietzsche, etc.). Either way, if you love dogs, your heart will ache for Buck.

On the other hand, your ears will ache from the terrible narration, a bass voice annoyingly reading the novel in sotto voce. Put up with it -- the story is worth it.

This is a great book but the reading was so frustrating to listen to. The dialogue sections were good but the rest was almost monotone. The reader's voice is very low (bass) and often low (soft) with little fluctuation, making words indiscernible. My opinion.

My Favorite Author of All time

Why? Because inside of us all is a forgotten, primitive existence that is just under the surface. And reading this book reminds me of that existence and I get a little happier inside knowing that I'm connected to my ancestors on a level that I can't explain.

Well narrated, enjoyed when read. Enjoyed again years later, when listened to. I would recommend this book to any body with a love for dogs.

This was written in February 2021. As our society recovers from near-takeover by nativist white supremacists, we liberals have been rudely awakened to the consequences of our complacency. Now we even question our choice of authors.

This is justified in Jack London’s case. One of the greatest storytellers of his time, it is easy to be mesmerized by tales of surviving nature’s adversity, like “To Build A Fire” or “The Call of the Wild.”

It takes some digging to discover these tales’ shared underpinnings. A devotee of the now-bankrupt philosophy of eugenics, London was obsessed with the idea of superiority of races and species, and their justified domination of others. To his twisted thinking, shared by millions at the time, and later by the Nazis, the White race has been selected by nature to rule the planet — just as a magnificent dog can return to nature and prevail over larger but lesser species.

Now that I am aware of this evil undercurrent, I can no longer enjoy reading London’s work. One thing he did enlighten me about: how smoothly a talented author can take an innocent reader down the dark paths that are part of the human condition.

The narrator is annoying.

I am very fond of Jack London's novels and short stories. This would have been a great listen except for the odd way the performer stopped and started (or paused) at inappropriate places in the sentences. I found this to be annoying and it distracted me from being able to following the thread of the narration.