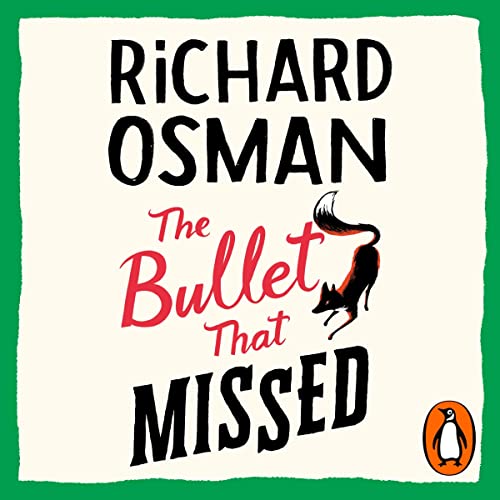 The Bullet That Missed

This audiobook in The Thursday Murder Club series is read by a new narrator, Fiona Shaw.

A new mystery is afoot in the third book in the Thursday Murder Club series from record-breaking, bestselling author Richard Osman.

This audiobook includes an exclusive interview between Richard Osman and journalist and TV presenter Steph McGovern.

It is an ordinary Thursday, and things should finally be returning to normal.

Except trouble is never far away where the Thursday Murder Club are concerned. A local news legend is on the hunt for a sensational headline, and soon the gang are hot on the trail of two murders, ten years apart.

To make matters worse, a new nemesis pays Elizabeth a visit, presenting her with a deadly mission: kill or be killed...

While Elizabeth grapples with her conscience (and a gun), the gang and their unlikely new friends (including TV stars, money launderers and ex-KGB colonels) unravel a new mystery. But can they catch the culprit and save Elizabeth before the murderer strikes again?

Not only well written but a great choice of Narrators, well done Fiona Shaw and Lesley Manville (Thursday murder club) for bringing a great book to life.

Personally, I struggled to listen to the narrator till the end.
Where is the lovely, lively, luminous Joyce? Her humor, her wittiness, clearly a big part of what makes the book so great disappeared. The clever fun everyday life observations that she writes in her diary are swallowed in a flat, off, whispery reading. At the beginning of the book, this whispery voice is there for half of the characters (it gets better towards the end). Bogdan is gone too. His accent is inconsistent and the tone of his voice makes him a different person all together. I do like Fiona Shaw as an actress, but really.. I can’t believe no one told her she was not in the right direction. You get it: the reading was not to my taste.

Shame on you, says Bernard

I would have rated the book five stars if Fiona Shaw had started her narration from the first book. There is no problem with her capability as a narrator, and no problem with the book itself, either.

However, in the universe of audiobooks, the author and the narrator go in tandem. The pairing is unique, especially in a series, and you cannot simply substitute a narrator due to some commercial consideration, e.g., scheduling issues, etc. The act is sacrilege, in my opinion.

When Book 13 of the Dresden Files series came out with a different narrator, I remember there was an uproar of complaints from listeners who insisted that Audible should address the situation by re-recording by James Marsters. Fortunately, Audible accepted the demand, and the incident ended happily.

For this series, Lesley Manville was the voice for the first two installments. Somebody in the business of producing this audiobook series may have thought it was still an early stage of the series, and the substitution would not do much harm. How wrong they were. They should realise this simple fact: audiobooks do not work that way.

As was the case for the Dresden Files series, I hope Audible will honestly act on its principle of "Unleashing The Power of The Spoken Word" by delivering on the expectation of loyal customers.

Missed the narrator from books 1 and 2

Brilliant story but the narrator was not nearly as good as the one in books one and two.

I had to return the book because I couldn’t bare the way Fiona Shaw was recording this novel. Her voice was so whispery and it was obvious that she hadn’t read the other two books and didn’t fully understand the characters. Why else would she had made the tough, PC Donna sound like a high school cheerleading captain?
Horrid, absolutely horrid. Couldn’t get into it at all. Very bad decision from the production team to change the narrator. It would have been so much better to wait until Lesley could narrate again even if that meant a slight delay in the release of the audiobook. I will have to get this book on my kindle and read it and just hope… oh, just hope that Lesley Manville narrates number 4. For this reason, I won’t be preordering… I need to first be assured that listening to the book will be an enjoyable (and not jarring!) experience.

The reader’s whispery delivery was so annoying that I had to return the book. Such a pity.

The Thursday Murder Club is my favourite series ever !
I adore every single character, good or bad.

Gone straight from the first two books into this one. Can't concentrate on the story because of the weird breathy narrator. Very off-putting in the car.

Lovely, interesting characters, intriguing storyline, funny situations, just a whole lot of everything you want in a murder mystery. Joyce and her gang is the sort of group which we’d all like to be part of even without the murders but obviously, they are a group of friends who always find themselves into a bit of pickle. Great interview with the author at the end, please keep that up too. Makes the fact that the story has ended more bearable. See you at the next one.

I miss them already...

loved this book... best so far... Fiona Shaw is wonderful... she manages to convey so much more than just the (brilliant) words on the page...
I miss the gang already.....

I enjoyed this book immensely as I did the narration of Fiona Shaw. Cannot wait for the next one!

I certainly missed the narration of Lesley Manville, but didn’t mind Fiona as much as other reviewers.

The worst part about the whole thing is that it’s over now. I’ll have to start again from scratch until the 4th book comes out.

I loved the first two books, but I just returned this one. I just could not stand Fiona Shaws reading. It took all the fun and she is kind of whispering all the time.
Also the story is boring. Why do the members from the thursday murder club just happen to know everyone involved in the case?
Very disappointing!

Can I return this Audiobook? I'm sure the story is good and I'll need to get a paper/kindle version.
The narration just takes out ALL the fun of these series. Even Elizabeth's voice is made so seriuos and... victimized!!! I've had so much fun with the previous 2 books, with this voice I couldn't get over the 5th chapter

As good as the first two books in the sequel

I was looking forward to hearing more about the Thursday murder club and was not disappointed. If anything, The Bullet that Missed is even better than the first two books in the sequel. It took me a moment to adjust to Fiona Shaw as the new narrator. As most people, I find it difficult sometimes to embrace new things. But she really does a fine job - with all the characters

very difficult to enjoy with such a terrible narration - makes me even angry to listen to it. all sense of humor is lost - makes it very ordinary - don’t understand how Mr Osman could approve this … not recommendable at all

Such an enjoyable story

Clever, funny, entertaining and with lovable characters, this is a great story. It perfectly follows the first two books in this series and further develops each character and introduces several new ones. Although highly unbelievable, the plot twists and changing relationships make for an enjoyable read. The speaker has changed from the last book but was also brilliant.