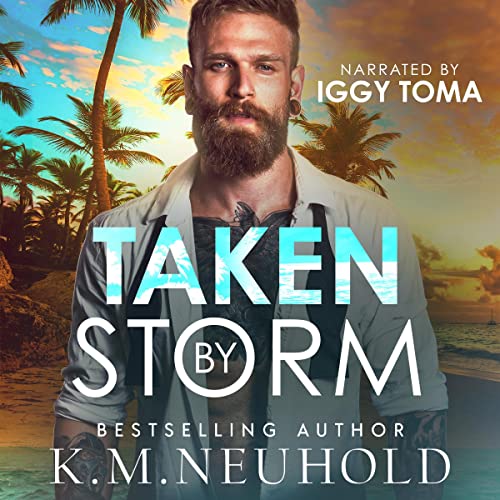 Chef Storm is moody, antisocial...and he just asked me to be his fake boyfriend.

Most people on the island avoid the hot-tempered chef, but he doesn't scare me. Sure, he's prickly, but I've also caught him feeding a stray cat, so I know there's more to him than the sky-high barbed-wire fence he's built around himself.

When Storm's ex-husband shows up unexpectedly during the off-season and refuses to go home, pretending to be Storm’s boyfriend is apparently my new job.

Faking it with my grumpy boss should not be this much fun, especially since the last thing I need is to make a fool of myself by falling for anyone else on the island.

Is there anything more exciting than being swept up in a storm? Maybe taming one...

Taken by Storm is a grumpy/sunshine, sort of boss/employee, definitely fake-boyfriend (except how fake is it if they’re actually hooking up?) romance, the second book in the Off-Season series where the residents of gay resort island get up to way too much fun once all the tourists leave for the season. Each book can be listened to as a stand-alone, but trust me when I tell you that you won’t want to miss all of these shenanigans.

This series is so much fun! I absolutely loved grumpy Storm with the sweet and cheerful Hennessy! Narration was spot on! Iggy does a great job with all the different voices! Looking forward to Boston and Trick next!

One of my favorite things about this book is how the author puts her own spin on the "fake relationship to avoid the ex" trope. Though Storm's ex showing up on Palm Island is the inciting incident that leads Storm and Hen to pretend to be boyfriends, the story doesn't actually revolve around him. Instead, the book's conflict very much centers around how the sexual tension between Storm and Hen is so thick it could be cut by a knife (chef puns? anyone?), leading to a fake relationship but very real (and very hot) encounters between them.

This is a low angst book that is still packed with emotion and follows two characters who come to terms with their pasts and decide to support each other into a new future. I have been thoroughly enjoying this series, and I was already looking forward to the next book before Neuhold teased us with hints about it in this story!

Grumpy, anti-social Chef gets his life turned upside down when his ex shows up on the island- and a spontaneous decision changes his life for the better! Great second book in the series. Light, fun romance with a twinge of angst but not enough to cause anxiety ;) Iggy Toma narrates beautifully. Great read for the start of summer vacation!

I love a good grump and Storm seriously delivers that. I think I even enjoy this one more than Perfect 10. Boston story can't come soon enough!!

There’s just something about a grumpy male that really does it. Especially when he meets and falls for the happy sunshiny man. They’ve got chemistry off the charts and the narrator does a fantastic job of portraying both sides of these men.

The Calm Meets the Storm!!

Storm: I’m not always a fan of the grouchy stoic character so I was a bit hesitant with Storm and I admit at first I was not a fan. However it didn’t take long for the cracks in the wall to show. After he opened up some his true personality is fantastic.

Hennessey: So I was admittedly more open to Hennessey from the beginning but his personality stood on its own without my expectations. He is cheerful but snarky. Secure at times but aware of his faults.

Sometimes the fake boyfriend genre can seems like the connection comes out at the blue. What I liked about Storm and Hennessey was as they opened up to each other throughout the fake relationship you were really able to see that they’ve been building the foundation for a very long time. The right catalyst was needed for them to give each other a chance. I love them as a couple and enjoyed their journey to get there. Excited for more in the series and cameos from Storm and Hennessey!

Igga Toma is a one-click narrator for me. I never doubt that the narration will be smooth and the nuances between the different characters will be obvious without sounding like a "fake voice"!

This is the 2nd audiobook in the Palm Island series, and it’s just as good as the first. This series really was made for audiobooks. It’s a fun, boisterous series that really comes alive under the narration of Iggy Toma. He does a great job at capturing the different characters and their personalities.

I really love this story, with the grumpy chef and the sweet waiter. Grumpy men are my thing, so I absolutely accept grunting as a form of communication! LOL

I had previously read the book, so here is my original review of the book:
You’ll never find a more fun and sexy island around. In this story, we get to the heart of the mysterious and cranky Chef Storm in this grumpy/sunshine, boss/employee, fake dating story. All the best tropes in one! Hennessy is sweet and flirty and a bit impulsive. Together they create the perfect pairing, forcing each other to find a better balance. Throw in a surprise visit from an ex-husband and an underwear stealing cat and you’ve got yourself a good time.

This is a sweet, fun, steamy easy read with no real angst. It’s the perfect book if you are lying sick on your couch feeling like death warmed over (to specific? LOL), or you know, just looking for something light and fun. I highly recommend you read the first book, there are a lot of side characters so it's helpful, and fun, to get to know them all.

Hennessey and Storm are swoon worthy main characters - truly! Grumpy, aloof Storm and relationship weary Hennessey are the least likely to hook up on Palm Island... until Storm's estranged ex-husband arrives. Then, Storm decides to throw caution to the wind and embrace his cute employee as a fake boyfriend. Just to throw the ex off, of course. Or is it?

The gang on the island and the banter between the guys is absolutely the best part of this series - so many laugh out loud moments. Add in the instant and steamy attraction between Storm and Hennessey and this is a must listen! I can't recommend this series enough.

Iggy nailed this book and is so amazing to listen to. While this is a standalone and can definitely be listened to as one, I'd go ahead and start at the beginning. It's just too much fun.

Riding out the Storm!

Another visit to Palm Island and more off season romance is in the air as well as crazy shenanigans!!!

Grumpy Chef Storm needs a fake boyfriend while his ex-husband is on the island.
When most people avoid the anti-social chef, Hennessy, his restaurant’s server enjoys trying to get rise out of his growly boss. When his next job assignment is to pretend to be Storm’s boyfriend, Henn finds himself more than up for the task…he just never expects it to get real.

Fantastic world building and character development. Very low angst and a sweet/spicy romance. Can be a standalone read or enjoy the series (you won’t be sorry).

Highly recommend this one…olive oil will never be the same for you!

The audible version is so well narrated you will swear you hear ocean waves, cracking beach bonfires, seagulls and smell the ozone of a storm brewing!

No one does snark better than Ziggy Toma!!! The narration was sassy perfection! This 2nd book was just as great as the first one. But I really want Raven’s book! And I missed not having Bambi and Ten in the story. Still a great series!!!