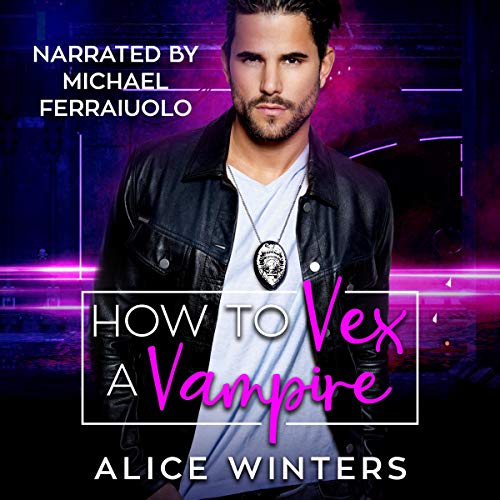 How to Vex a Vampire

Getting into the vampire-only detective unit was the easy part. What’s going to be more difficult is dealing with my new partner - an ancient vampire who keeps threatening to eat me. The unit has never had a human in it. Marcus - or, as I like to call him: Fangy McFangface - would really prefer to keep it that way.

He’s grumpy, short-tempered, and broody, but I have a way with words, and I know he’s starting to like me, even if he swears he’s not. But what he doesn’t know is that I didn’t join the unit because I was tired of being a homicide detective. I joined because there is someone after me.

They’ve already taken enough from me, and I’m afraid they’re going to take all of me if I don’t find someone to help. That’s all Marcus was supposed to be, but now, he’s so much more, and I can’t imagine my life without him.

The moment the pesky human walked through that door, I knew I had to get rid of him. He’s charming, and almost everyone else instantly loves him, but he doesn’t understand how risky it is being part of this unit as a human.

But as I get to know the stubborn man, I learn that, perhaps, he’s not as naive as I once thought. And, maybe, he’s what I needed to realize there is more to life than just work and my dog.

A group arises that is threatening to disrupt the alliance between the humans and the vampires, but Finn is the one who shows me how strong that alliance can be and reminds me why it’s worth protecting.

When threats hit closer to home, I realize I would do anything for Finn because he’s brought so much joy to my life...and because he’s mine.

Note: This book features a creative use for undergarments, unintentional splits, a wolfhound who just wants to be a part of things, a vertically challenged human who still manages to wrap every vampire he meets around his little finger, the best date ever, possessiveness, really awkward dancing, some workplace revenge, and just a bite or two. Or three.

Very, very confused by all the positive reviews

If nothing else, the massively gushing reviews I've read of this book have taught me that I have wildly different taste from other romance readers, because I couldn't get past the first hour of this book.

To me, the book reads like a fanfic, and not even a particularly good one. Yes, Michael Ferraiuolo does a good job with the snarky dialogue, but the book is like 90% dialogue, and 90% of THAT is snarky. That's a bit much for me. It's like the author discovered that she can do one thing pretty well--in this case write snappy dialogue--and decided to make the entire book into one long conversation. And another thing, these are supposed to be cops, and some of them are supposed to be ancient vampires, so WHY oh why does everyone talk like middle school girls?

In addition, the book is written entirely in present tense which drives me NUTS. Usually I can get past it after a while, but in this case it just got more and more grating as the narration went on.

Don't get me wrong, I KNOW I'm in the minority in not liking the book. Read some other reviews and buy it, you'll probably love it. But it was just not for me, at all.

How to Vex a Vampire
By Alice Winters
Narrator Michael Ferraiuolo

Narrator score🎧 ; Michael is a king! Come on!!! the effects he did with his voice, were absolutely fantastic! That
Voice he gave the antagonist character was just brilliant! The characters ... I'm truly in awe of this talent. And you have some Russian in here. I ask myself if Alice winters know what zanuda truly means. Yes, it is annoying. This is the meaning of this word but it much more. It's if you got a piece of wood under your nail (zanoza in Russian) and can't get it out the pain will irritate you... but it won't be unbearable and you wouldn't feel it constantly, but when you will it would be so painful and irritating. And the point is that it suits the main character so much that it's hilarious! And Michael just says the word so good!!!

“You’re like a really annoying dog that wants attention, and I just want to stick you in a crate on the other side of the house.”

Level of steam🔥: it's a sweet sweet book. You do have some moments but its definitely not about that. I think the innuendo covers that part the best. I discovered I'm 6 years old apparently. Because I love those moments more than the steamy parts, much much more.

Level of anxiety and sadness0😱😢: the book is hilarious! But with that, you have this Alice magic. She just has this capability to take a storyline that can be very serious, and turn it to the best comedy ever. And she did it again in the best way possible! You do have a complex storyline but it's so funny that your face will probably hurt from the smiles and giggles.

“What? Do I not look like the type of man to snuggle up to a bush and take a nice long nap?”


The book itself📖: what can I say? How many times I have listened to books about vampires. And yes a lot of them are brilliant as well, but this book has actually a very complex world to stand on, you have rules, that you discover with the story. And it's a fantasy that shows you said rules on the go by.
You have two incredible characters. Each brings you its complicated past to the story, and the development is so smooth and funny that you just can't not love it. I think that even people that don't like fantasy stories usually will adore this book. What's not to love? A quirky twink a rude old vampire and a lot of action!

Played up on every stereotype

I wanted to love it and made myself listen to the end. The story was just okay. It played up on every gay stereotype. The storyline felt very dated. The characters were not realistic in their roles. The book may have been tolerable if the narrator didn't over exaggerate the effeminate nature of the main character.

Laughed my head off!

This was a an extremely pleasant surprise! The writing was great. Serious and Funny! Michael Ferraiuolo was the perfect narrator for this book. Can't wait for the next book!

It's like one long conversation with bits of plot

This author is good at writing heartwarming characters and snappy, funny dialogue, but that dialogue goes on entirely too long. Listening to it, I'm imagining PAGES of their silly back-and-forths until something finally happens or the scene finally changes. It feels endless. It was very charming and endearing for the first book I read from this author which was the first Hitman one, but listening to the same exact dynamic again for 10 hours got really old really fast. It does kind of read like a fanfiction, and while I love fanfiction, fanfic works because fanfic doesn't really have the responsibility of carrying its own worldbuilding. The cornerstones are already laid out for you.
I adored that the main character was disabled, but sadly, trying to get through the book when the conversations go on forever and you find yourself mumbling "Yes, yes, this is all very funny. Ha ha. Please move on" is disappointing.
Michael Ferraiuolo did a great job as usual, one of my favorite narrators ever. Finn was a little extra flamboyant sounding but that's not necessarily a bad thing and maybe he was supposed to.

A snarky and hilarious paranormal romcom!

This was a sweet opposites attract, kind of enemies to lovers paranormal romance.

I loved the snarky banter, hilarious back and forth and entertaining dialogue.

The characters were likeable and fun and the hint suspense added to the overall charm of the storyline.

Definitely looking forward to the rest of the series.

loved it. will probably listen to it multiple times..sooo funny. Marcus and Finnegan are perfect together.

I'm so in love with this series. Alice writes amazing books with with so much humor, loooove and a twist. You laugh, you cry and then laugh some more. Michael seriously he really is one of the best narrators I've listened to. really recommend both of them.

Alice Winters knows how to create a fascinating blend of romance, humor, and mild terror while educating the reader about personal challenges.

This is my favorite book from the author so far. I can't wait for the next one.

The narrator is perfect for this series.

great and funny story, but one thing is for sure: Micheal Ferraiuolo stole the show! 👏

I laughed a lot about the jokes in this book, the story kept me entertained from start to finish! definitely in for a re-listen.

Like every audio book i listened to from alice winters so far (which have been... 5, i think), the story is funny, romantic, lovely, and has everything you'd wish for.

Also, i loooove the voice acting. Especially Marcus' deep voice and the russian colleague which grew on me so fast.

I have been looking into the other books and saw that there was another story about him, and I am absolutely listening to that one, too.

Amazing!! Don't get fooled by the cover...

I fell in love with that book! Michael Ferraiuolo is doing an extraordinary job bringing the characters and the story to live! I haven't had so much fun listening to an audio book ever. Originally I stumbled across this book because of it's terrible cover and I wanted to make fun of it but then the description got me intrigued and I became really invested in the story.

It's so sad because I think the cover doesn't do this book justice in any possible way. When you're seeing the cover you think of a badly written and stupid vampire story. I know there are people behind the cover and I don't want to insult them but anyhow I think it doesn't do this book any justice and more people would be willing to listen to this book (or read it) with a more intriguing cover that suggests this book has a great story with lovely characters and isn't your ordinary vampire story.