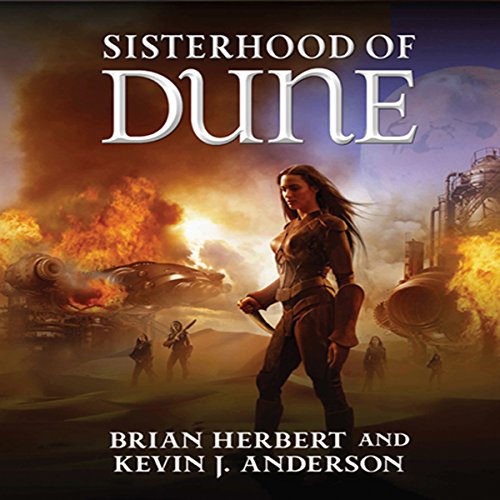 It is 83 years after the last of the thinking machines were destroyed in the Battle of Corrin, after Faykan Butler took the name of Corrino and established himself as the first Emperor of a new Imperium. Great changes are brewing that will shape and twist all of humankind. The war hero Vorian Atreides has turned his back on politics and Salusa Secundus. The descendants of Abulurd Harkonnen Griffen and Valya have sworn vengeance against Vor, blaming him for the downfall of their fortunes. Raquella Berto-Anirul has formed the Bene Gesserit School on the jungle planet Rossak as the first Reverend Mother.

The descendants of Aurelius Venport and Norma Cenva have built Venport Holdings, using mutated, spice-saturated Navigators who fly precursors of Heighliners. Gilbertus Albans, the ward of the hated Erasmus, is teaching humans to become Mentats… and hiding an unbelievable secret. The Butlerian movement, rabidly opposed to all forms of “dangerous technology,” is led by Manford Torondo and his devoted Swordmaster, Anari Idaho. And it is this group, so many decades after the defeat of the thinking machines, which begins to sweep across the known universe in mobs, millions strong, destroying everything in its path.

In Brian Herbert and Kevin J. Anderson's Sisterhood of Dune, every one of these characters, and all of these groups, will become enmeshed in the contest between Reason and Faith. All of them will be forced to choose sides in the inevitable crusade that could destroy humankind forever.

This is the First Need to Listen for 2012

I love the continuation with the Dune series by Brian Herbert and Kevin J. Anderson. Yes, it is not Frank Herbert, but it is as close as you are going to get, and it is Wonderful.

The authors have done a great job telling the back story, although for me, I had already read what is called the Legends of Dune series, which includes the Butlerian Jihad, the Machine Crusade and Dune:the Battle of Corrin. You don't need to read these books to enjoy this book, but I enjoy the series and it is impossible for me view this with fresh eyes, the back story is told very well, so you don't need to read the other books.

Although I read an ARC of the book I could not wait to get the audiobook so I can hear Scott Brick add his voice to this book. For me he is the voice of the Dune series.

It is a great telling of the background of Bene Gesserit School and how the Mentats developed.

For me it closed the loop on a lot of things just mentioned in the original Dune series.

A letdown for the Dune Saga

Would you try another book from Brian Herbert and Kevin J. Anderson and/or Scott Brick?

Yes, this is the bad apple out of the bunch that I have seen. Most of the are quite good.

None of my issues with the book are with Scott Brick's performance, he is as solid as I have come to expect from it.

Did Sisterhood of Dune inspire you to do anything?

Yes, to stop listening to it.

I love the Dune Saga, but this addition was painful to listen to. it's like they where grasping for straws on what to write next. I sincerely hope they are done and move onto other projects. This book shows to me that they have exhausted their good ideas for working with the setting.

Worst thing about the book : the characters

The books are obviously set in the same universe, but the similarities end there. The main difference is in the characters.

In Frank Herbert's books, the characters are complicated, different, intelligent, has motives that only become clear over time. I've read all the books of the new series up to Battle of Corrin, skipped over a few, then came to this one. The characters are simple, they don't think through what they do, their motives are blatant, and the things they do seem to be only to add drama to the book. There is not a single character I like. I had hoped that the character development has improved between Battle of Corrin and this book, but I was disappointed.

The story itself is not bad, entertaining, and the narration performance is good. I bought this audiobook because I had hoped for more interesting stories in the Dune universe, but halfway through the book, I really want to go back and re-read Dune to remind myself why I like it so much.

If you compare this to Frank Herberts work you will of course be dissappointed. Frank Herbert was one of those once a generation authors and basically the Tolkien of sci-fi. Brian Herbert is not his father. He writes good solid fiction but Brian's writing obviously does not have the character development or depth of his father's work. Does this make the book bad? No, it doesn't. Taken On it's own it is a decently written interesting book.It won't wow you, but it is a solid read and it is cool to get more back story on the Dune universe. if you love Dune and want to learn more aout the universe you will like this. If you are expecting Frank Herbert level writing you will be dissappointed. Still, all in all it's a good read and worth a credit in my opinion.

More believable in the Dune context

What could Brian Herbert and Kevin J. Anderson have done to make this a more enjoyable book for you?

Stick with the original premise of the Dune Universe

I have been a Dune fan since the early 1970s and loved all of Frank Herberts Dune Novels and was excited when it was announced that the series would continue in 1999 with Brian Herbert and Kevin Anderson in the helm. The novels were all entertaining and many I enjoyed as audio books during by long commutes. However, there the spirit of the orignal Herbert novels was missing in the new books. Frank Herbert was the master of suspension of dis-belief. I fully beleived that a society could evolve without computers and yet still have some technology elements like star ships and force fields. This was accomplished by maximizing the capabilities of human beings thorugh special training or forced evolution that created Mentats, Sisters, Suk Doctors, and celestial navigators who all excell at their craft witout technology. Where the new novels missed the boat is there is too much technology and it actually negates Frank Herberts original conception. For example, in the House Atreides to House Corrino novel we, the Suk Doctor, Wellington Yueh, rebuilds one of the characters into a cyborg; this made no sense and the Frank Herbert novels that were supposed to be the sequels of these novels, make absolutely no reference to cyborg-like being and they would in fact be forbidden as

Long preamble to the book I was expecting.

Only if they had followed tHe entire series up till now.

Has Sisterhood of Dune turned you off from other books in this genre?

No. But I'm disappointed.

Did Sisterhood of Dune inspire you to do anything?

I look forward for years for a new Dune novel. I guess I have to wait years for the end of this one.

Just too many story threads unresolved.

I remember reading the three books of the jihad when they were first published. There were so many unanswered questions then and so many mysteries. What happened to Vorian? What of Gilbertus Albans and Erasmus? How did the sorceresses and later sisterhood evolve into the Bene Gesserit?
Once more Brian Herbert and Kevin J Anderson have captivated the imagination and taken it on an incredible journey through the Dune universe. The narrator does great justice to the work, providing emotion and lack of it when appropriate. Indeed, this is an audiobook for any fan of the expanded Mythos provided by Brian Herbert and Kevin J Anderson.

It is definitely another Dune book by B and K

I’m just not real crazy about Scott Brick reading the book. That may be because he read a few other books I just hated. His emotional expression sounds so forced. This story is a bit tedious at first but I eventually got into it.

I have either read or listened to every Dune book by both Frank Herbert and Brian Herbert. It has been a while so when it started naming characters and giving background right off, I had to strain my memory. Truthfully, the set of books that precede this one, turns out was just not so memorable.

I am trying to decide if it is Brian Herbert or Kevin Anderson who brings the element of bubblegum sci-fi to these books. I read Anderson’s Star Wars trilogy years ago but that is supposed to be bubble gum so I can’t tell.

Even though I just cannot bring myself to give it a glowing review, I just have to follow this series. I also do other horrible things to myself like binge drinking and going to the gym.

After a rather meandering story and unfocused plot, the book abruptly ends leaving the listener looking for the concluding chapter. While I don't mind books that make you look forward to the next in the sequence, this one is truly "half a book."

I forgot just how bad this book was