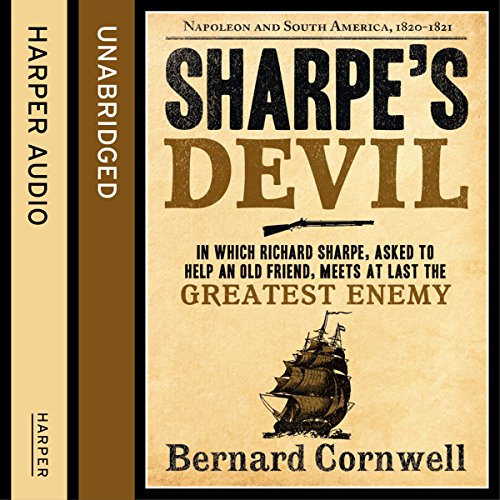 Five years after the Battle of Waterloo, Sharpe's peaceful retirement in Normandy is shattered. An old friend, Don Blas Vivar, is missing in Chile, reported dead at rebel hands--a report his wife refuses to believe. She appeals to Sharpe to find out the truth.

Sharpe, along with Patrick Harper, finds himself bound for Chile via St. Helena, where they have a fateful meeting with the fallen emperor Napoleon. Convinced they are on their way to collect a corpse, neither man can imagine the dangers that await them in Chile.…

Soldier, hero, rogue--Sharpe is the man you always want on your side. Born in poverty, he joined the army to escape jail and climbed the ranks by sheer brutal courage. He knows no other family than the regiment of the 95th Rifles, whose green jacket he proudly wears.

"Sharpe and his creator are national treasures." ( Sunday Telegraph)
"Bernard Cornwell is a literary miracle. Year after year, hail, rain, snow, war and political upheavals fail to prevent him from producing the most entertaining and readable historical novels of his generation." ( Daily Mail)
"Cornwell's narration is quite masterly and supremely well-researched." ( Observer)
"The best battle scenes of any writer I've ever read, past or present. Cornwell really makes history come alive." (George R.R. Martin)

Such a great adventure story with historical facts- loved knowing more about Sharp Harper and history of Chilli.

A good ending of a great series. Not against the french and not in europe but like always a great story.