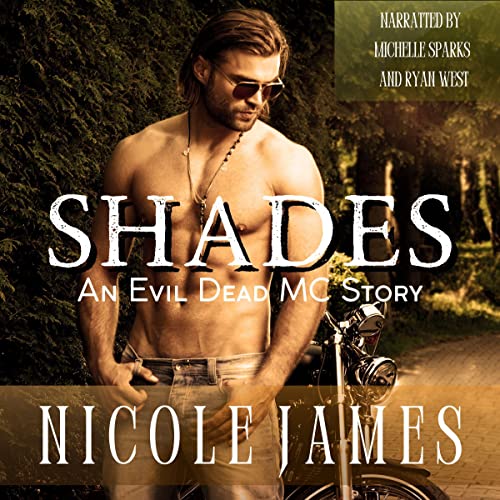 The love of his life just rode up on the back of a brother’s bike. Will Shades’ desire for earning a VP patch stand in the way of any future he could have with Skylar? When a rival MC shows up looking for her, things go from complicated to damn near impossible. Does Skylar come with more baggage than Shades is willing to sign up for?

For years after Shades had lost Skylar, he’d tried satisfying the emptiness of losing her with booze, women and the club. He’d turned his frustration at having to give her up into a determination to climb the ranks of the club, but he hadn’t counted on the fact that the pull he’d felt toward Skylar had only lain dormant in him all these years. Or that all it would take to reignite it was just one look at her. And he sure as hell hadn’t counted on her showing up on the back of a brother’s bike.

This is part of The Evil Dead MC Series, but each book can be listened to as a standalone.

Check out the other books in The Evil Dead MC Series...

Love this story, I believe this is one of the best stories I have heard!

Definitely a MUST! I LOVED THIS BOOK! Narrators were AMAZING! THANK YOU NICOLE JAMES YOUR FANTASTIC! DEFINITELY READ OR LISTEN TO THIS ONE! I love this Series 🖤❤️🥰💋💕

The narrators are fabulous. The story is so good. Love the Evil Deads MC. Nicole James writes such great stories. You will love Shades and Skylar 's story.

I am so excited for this release... I am hoping the remainder of the series is released on audio!, too!