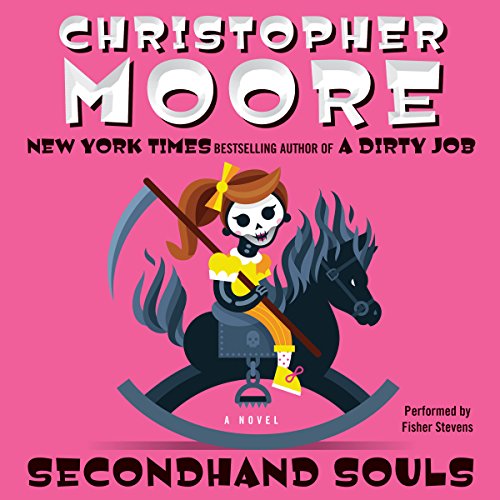 In San Francisco, the souls of the dead are mysteriously disappearing - and you know that can't be good - in New York Times best-selling author Christopher Moore's delightfully funny sequel to A Dirty Job.

Something really strange is happening in the City by the Bay. People are dying, but their souls are not being collected. Someone - or something - is stealing them. No one knows where they are going or why, but it has something to do with that big orange bridge.

Death merchant Charlie Asher is just as flummoxed as everyone else. He's trapped in the body of a 14-inch-tall "meat puppet", waiting for his Buddhist nun girlfriend, Audrey, to find him a suitable new body to play host.

To get to the bottom of this abomination, a motley crew of heroes will band together: the seven-foot-tall death merchant Minty Fresh, retired policeman-turned-bookseller Alphonse Rivera, the emperor of San Francisco and his dogs, and Lily, the former Goth girl. Now if only they can get little Sophie to stop babbling about the coming battle for the very soul of humankind.

a snarky slapstick sequel to A Dirty Job

A Dirty Job is probably my favorite Christopher Moore novel, and it's a frequent re-listen in audiobook for me, partly due to Fischer Stevens' fantastic narration. I was so excited for this sequel.

While it was lovely to see some old friends (Minty Fresh! And I laughed out loud at Lemon), Lily (who has a much larger role in this one), Charlie, Jane, Sophie, the Emperor, Mrs Ling and Mrs Korchev, etc. - many of the characters seemed to have lost their heart or become a more slapstick version of themselves in Secondhand Souls: Sophie's urban slang/potty mouth was more jarring than funny to me; Jane was a one note joke; Minty was strung out and dropped the n-bomb way too much for me; the Emperor gets tasked with a list that basically meant nothing. Really? Moore couldn't have found a better use for such an awesome character?

The new characters seemed more to be plot devices than actual full-fledged characters. Mike Sullivan was sort of a Charlie-esque beta-male voice of reason from the first book, but in the end he was only an information delivery device and a convenient vessel. Lemon Fresh was awesome at first as we tried to guess his purpose, but I never really know how to feel about him either, and I wasn't thrilled about how Minty's character competed with him and got more abrasive/violent. Wiggly Charlie was the Jar Jar Binks of the book. Ugh. I hated the squirrel people and Bob/Thebe the Wise.

If you loved A Dirty Job, you will want to read this to see how the story ends. This is fast-paced, energetic (maybe even frantic), full of offbeat and ridiculous humor and snarky, irreverent verbal wordplay. Some of the jokes land well and others splat on their faces. There is more of everything - swearing, violence, action, romance, slapstick, and exposition... but I'm not sure that the final explanation really makes any sense. The great bits are really great, the rest mostly gets lost in the tornado of sound and furious madcap action. It felt like this sequel had a little less heart than A Dirty Job.

What made the experience of listening to Secondhand Souls the most enjoyable?

I felt like I was seeing old friends who I haven't really seen in a long time. I will admit I listen t0 Chris's books over and over. I move from A Dirty Job (my 1st book, by Chris) Fluke, You Suck and my favorite book ever "LAMB" and now I have this to add to that list. As a matter of fact I am about to start listening for a 2nd time. I finished it yesterday and as usual I will hear many things I didn't catch the 1st time because I was so excited to be listening and hearing certain people I would drift off remembering their quirks and peculiarities, them I had to back up

What was one of the most memorable moments of Secondhand Souls?

SPOILERS!!!! I will not answer this question because I don't want to ruin it for others. IT ONLY CAME OUT 2 DAYS AGO!

Which character – as performed by Fisher Stevens – was your favorite?

Charlie, Sophie, Dark, Minty, Riveria.....
I couldn't choose if I wanted to.

I think I've been smiling since I started. and I think I may have shed a tear or too. and when I had headphones on I did laugh out too loud a few times, a woman in a Dr's office asked me what I was reading and she took all the info and the list of my favorite C. Moore Books. the receptionist told me she was a voracious reader so I asked her to ask her how she liked them and to let me know. I LOVE TURNING PEOPLE ON TO CHRISTOPHER MOORE AUTHOR EXTRAORDINAIRE

Chris, will we have to wait another 9 years?
Please say no, it will be much. much sooner. and
THANK YOU

I may or may not buy book three if there is one. I like the crazy characters but still want a good plot.

I was working out of town as a vacation relief salesman for a food service company when I walked into a restaurant and a hostess was reading "Island of the Sequined Love Nuns". The hostess and title captivated me, and shortly after began my affinity for the works of Christopher Moore. I've tried to "share the love" with others as much as possible. Secondhand Souls is no exception. Great characters, fun story with depth if you pay attention, absurdism galore...just love it. And Fisher Stevens is fantastic as, well, everyone! Whether he's narrating Charlie's voice or that of Lily or Minty Fresh, he's dead on target. Love the book, author, narrator, & the wheel of life in general. In short, I need a cheese.

So hysterical I snorted... a lot

Christopher Moore is a complete genius. Combine that with the extremely versatile performance of Fisher Stevens and the result is pure magic. If you are looking for a witty and yet oddly complex tale of the meaning of life and death, with deep characters, insanely amusing phraseology, and deliciously performed voices, THIS BOOK IS FOR YOU. If you thought you liked mozzarella sticks before, just you wait.

TAI CHI = KARATE FOR THE SLOW
This book is hilarious and I liked it even better than Dirty Job and better than the entire Blood Sucking Friend Trilogy and I loved all those books. I probably liked it better because of the huge supporting cast. The main character is Charley(THE BETA MALE), but he does not play as large a role in this one as the last. He is supported by Lilly (GOTH GIRL), THE EMPEROR OF SAN FRANCISCO, MINTY FRESH, THE MAGICAL NEGRO, THE BOOTY NUN, THE SQUIRREL PEOPLE, the 400 HUNDRED POUND HELLHOUNDS, others and of course Sophie (DEATH, but more importantly, SHE IS IN THE ADVANCED READING GROUP).

MILES DAVIS SOUNDS LIKE HE IS SMOTHERING SQUIRRELS
This whole thing is laugh out loud funny, but the Defibrillator Caper has to take the cake. You might want to pull over when that gets started.

BUTTERFLY WINK
The narrator does an excellent job. It is so important, especially with a funny book to get a narrator that understands the context and who has the correct timing. Funny writing is even funnier when read right.

Five big stars for this one.

I listened to this entire audio book in less than 24hrs. I couldn't walk away from it! Christopher Moore is always brilliant in his character development.

The epitome of mediocrity.

I LOVE Christopher Moore's books. A Dirty Job is easily one of my favorite books. But this book is just so "meh".

So often you feel like the author was in the middle of writing a book of short stories, then the publisher forced this book, and the author was like "fuck it I need to get my word count up so let's include that baseball story I wrote here, and that Spanish/Russian love story here."

Narrator Stevens was so good in the first book but for some reason in this book he plays Minty Fresh as if he were a crack-head. In the first book Minty was, cool, suave, and unflappable, with a deep, silky tenor. But in this book, same author, same narrator, the same character is high pitched, nervous, insecure, and paranoid; *He sounds like a crack head!* What the hell? Why couldn't Lemon be the goddamn crackhead. If you like Minty Fresh the version in this book is going to be a huge disappointment.

The return of the Morrigan's is completely pointless. Any other mythical God could have been introduced. Their inclusion seems like a lazy plot device rather than characters central to a good original story. It seems like a "hey hey remember these guys? Ta-Da! SEQUAL! Money please..."

Read the first book and ignore this one.