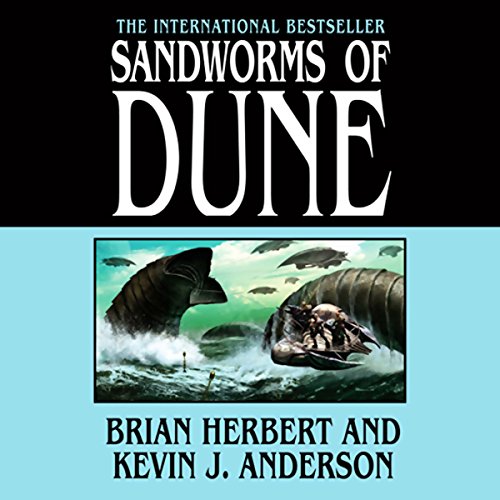 At the end of Frank Herbert's final novel, Chapterhouse: Dune, a ship carrying a crew of refugees escapes into the uncharted galaxy, fleeing from a terrifying, mysterious Enemy. The fugitives used genetic technology to revive key figures from Dune's past - including Paul Muad'Dib and Lady Jessica - to use their special talents to meet the challenges thrown at them.

Based directly on Frank Herbert's final outline, which lay hidden in two safe-deposit boxes for a decade, Sandworms of Dune will answer the urgent questions Dune fans have been debating for two decades: the origin of the Honored Matres, the tantalizing future of the planet Arrakis, the final revelation of the Kwisatz Haderach, and the resolution to the war between Man and Machine. This breathtaking new novel in Frank Herbert's Dune series has enough surprises and plot twists to please even the most demanding listener.

Listen to more of our titles in the Dune series.
©2007 Herbert Properties LLC (P)2007 Audio Renaissance, a division of Holtzbrinck Publishers LLC

I have never been enthralled with the authors' 'new' Dune books (although I respect their other works), but I have bought them all to hear how the story ends (and began). I would rate this book better than some of the others in the authors' series, although none of them approach the original works (in my opinion). I actually do not mind the content of this book so much as the style of writing, which is so different from Frank Herbert's (though some may prefer it as more 'readable'). I assume the majority of the plot points were outlined by F. Herbert, but I felt the execution was clumsy and drawn out. The ending resolution felt derivative of several sci-fi movies to me, you'll know which when you read it. Mostly though, I find that I cannot listen to Scott Brick's narration - this is entirely personal preference, but I find his narrations overly dramatic and entirely too earnest.

This book could only have been made better if someone else entirely had written it.

What was most disappointing about Brian Herbert and Kevin J. Anderson ’s story?

Everything! The characterization was all wrong. I'm not convinced the authors had even read the original books. It's like (which they say far too often) they used spark notes and then wrote a book for a bunch of third graders.

There was a ridiculous amount of filler and useless plot lines that led nowhere. The authors not only repeated stories from the previous books, but would also repeat parts of this book! They brought back gholas for no reason other than to add useless side stories to the already drawn out plot. This has to be the worst book I have had the displeasure to experience. Brian should be ashamed of himself for this terrible book and his efforts to capitalize off of his father's amazing series.

He did a fine job in the previous books, but characters suddenly gained new accents in this book. Why?

No - I only made it through because I wanted to know how they ended this awful story.

I wish I could give this zero stars

I don't know what to say other than this wasn't Dune. It was like Dune but written in the style of Twilight.

an unexpected turn of events.

this ending of the series seemed to be dependent more in the two prequel trilogy sets than the events of the original series. had I not read them I would have been lost as an original fan of dune. not a bad thing only different. do your self the service of reading the house trilogy and butlerian trilogy first

A sad end to an otherwise excellent series.

This climax has been in the making for decades. I came to the party late but have really enjoyed the Dune series. The Brian/Kevin novels have been criticized by fans because of some emotional objections to the story being continued by anyone besides Frank Herbert but lets face it, the story is worth continuing. Besides, I've read many of Kevin J Anderson's other works and his writing is superb (until now) so I knew that these objections were nonsensical.

What I like: Their continuation of the story is seamless. The dialog and behavior of the characters is spot on. The audiobook's narration is good and immersive despite the lack of consistency in character voices from book to book. The story is very engaging which makes it difficult to stop reading until the book is finished.

What I didn't like: The final resolution of the story was abrupt and illogical. Here are a few points that make me say that...
1. Sandworms can survive the moist atmosphere of Synchrony because they have the intelligence of Laito II to guide them, yet the original Laito II was killed by water.
2. The identity of the face dancers was obvious yet these humans with evolved intelligences could not identify them. In fact, it was so obvious that these scenes were almost painful to endure.
3. It seems that one no longer need undergo the spice agony to become a Kwisatz Haderach. One character (who won't be mentioned) simply needs to be told that he is the Final Kwisatz Haderach for him to realize he has all these powers. Ridiculous!

Let us not forget that the very definition of a Kwisatz Haderach from the original Dune, is a male that can undergo the spice agony and tap into "other memory" from both male and female ancestors. Suddenly, the agony is no longer necessary.

4. The war ends in a sort of 'fightus interruptus' where the author just breaks it off abruptly. I thought, "why not just do that from the start?"

An Insult to the legacy.

What would have made Sandworms of Dune better?

This book is just terrible. It has none of the soul of Frank Herbert's original books. It's slapped on to the end of the series, allegedly to "complete" the story, but really it only mocks the universe Frank Herbert created. The dialogue is bad. The book is full of paragraph after paragraph of filler. Brian Herbert endlessly recaps earlier books, but misses or changes many important details and gets the characters' personalities all wrong.

The prose is flat and unpoetic. The narration is from an entirely different perspective. The plot is tedious and there are abundant holes in it. There is no artistry. Brian Herbert tries to ape his dad's poetic style in some places, but it's embarrassing and absurd. Kevin J Anderson doesn't help at all. The end result is a flat, unimaginative ending to a saga that should have been so much more. Sad.

Has Sandworms of Dune turned you off from other books in this genre?

I will not be reading any other Dune books, or any other books, authored by Brian Herbert or Kevin J Anderson.

I loved the narration of the *real* Dune novels by Simon Vance. He had a wonderful range both both tonally and in personality. You could easily tell the difference between characters. I'm not sure he could have helped this awful story, though. As for Scott Brick, literally anyone would be better. His narration is just.. bad.

Not every sentence needs to be spoken like you are revealing the secrets of the Cosmos, but Brick's every utterance is dripping with absurd and unnecessary melodrama. And his dialog is just as bad. He can't hold on to an accent to save his life, and his dialogue constantly wavers in and out of character. There's no way to tell by intonation who is speaking.

What character would you cut from Sandworms of Dune?

All of them. None of them deserve to be in the Dune universe.

Stay away from this book if you don't want to feel a pit of sadness where the Dune saga used to be in your heart.

narrator could do better

narrator makes liet kynes, a fremen, sound like a german. he injects german pronunciations into liet kynes. it makes no sense.

This is the best of the Brian Herbert/Kevin Anderson Dune continuation collaborations. Unfortunately, you'd have to read/listen to several of the other books to understand the setting and the story, not to mention the characters. Your listening time and money would be better spent on the original Dune books written by Frank Herbert.

Sad after the real

This is nothing like the first Dune and is only taken from an outline of the author. I was very disappointed. Although Scott Brick is a great narrator he now does all the voices compared to the many varied voices we were used to in the first Dune. There were no sound effects either. Just Light years difference and not in a good way.