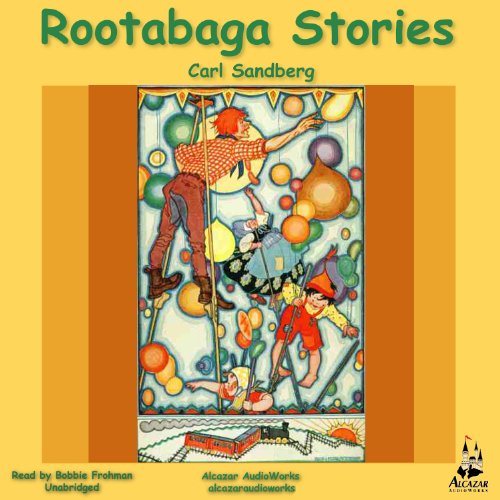 Rootabaga Stories (1922) is a children's audiobook of interrelated short stories by Carl Sandburg. The whimsical, sometimes melancholy stories, which often use nonsense language, were originally created for his own daughters. Sandburg had three daughters, Margaret, Janet and Helga, whom he nicknamed "Spink", "Skabootch" and "Swipes" those nicknames occur in some of his Rootabaga stories. The Rootabaga stories were born of Sandburg's desire for "American fairy tales" to match American childhood. He felt that the European stories involving royalty and knights were inappropriate, and so set his stories in a fictionalized American Midwest called "the Rootabaga country" filled with farms, trains, and corn fairies. A large number of the stories are told by the Potato Face Blind Man, an old minstrel of the Village of Liver-and-Onions who hangs out in front of the local post office. His impossibly acquired firsthand knowledge of the stories adds to the book's narrative feel and fantastical nature. In the Preface of the little known Potato Face, Sandburg wrote, "it is in Rootabaga Country, and in the biggest village of that country, the Potato Face Blind Man sits with his accordion on the corner nearest the post office. There he sits with his eyes never looking out and always searching in. And sometimes he finds in himself the whole human procession."