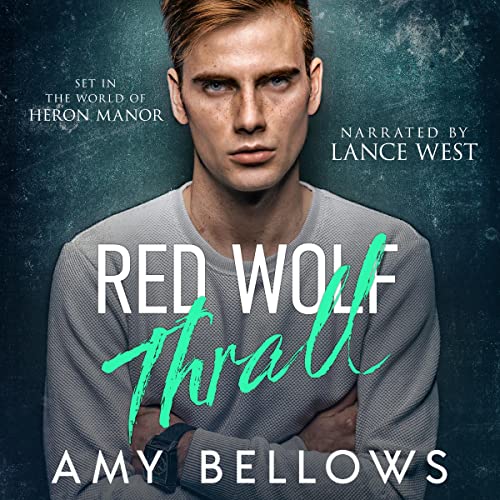 The red wolf thrall brings grown men to their knees.

All it takes is one look from an omega red wolf shifter, and men mistakenly believe they have found their fated mate. Kings have been dethroned, businessmen have lost fortunes, and heartless murderers have fallen helplessly in love under the curse of the thrall.

Kai knows his feelings for Noah, a handsome red wolf shifter, may be nothing but pheromones and magic. But what is love, if not magic?

Kai’s going after him anyway….

Red Wolf Thrall is a contemporary shifter romance set in the world of Heron Manor. It includes knotting, MPreg, and a love story between two omegas. A shorter version of this book was previously published as When Two Omegas Dance.

This story examines the theme of starting over in the many ways that people have to start over. With everything going on in my life I appreciated the low angst. There are some big moments but the relationship for Noah and Ari despite circumstances feels pretty solid.
I listened to the audio version and really loved the bonus story included.

I enjoyed the story so much! The characters were so sweet and so much fun to get to know. I loved their story and seeing how their relationship grew. It was great to see them follow their hearts even though at times they weren’t always sure. The ending made me smile a lot. Love these characters and the world so much!

Amy brings to the table relationships and characters that don't really fit into one specific mold and Kai is a beautiful example of this. He's comfortable with the label omega but not all traditional aspects and Noah respects Kai's needs and boundaries. I love the way that Amy writes gender and this is definitely no exception. This is a super sweet tale between two characters where trust and family is found. I think grief is another major theme that runs through but is dealt with in a very compassionate manner. Noah grieves for the loss of his alpha father and community while Kai is processing the loss of his dream of dancing ballet professionally. This is a beautifully emotionally fulfilling story and left me feeling warm and hopeful.

Lance West does an amazing job as usual. He has a great voice and makes subtle changes for Kai and Noah. His range is a little shallow with some of the side characters but nothing that takes me out of the story. I feel that he was smoother with his performance in this one than in some of his others. The quality of his voice fits really nicely with Amy's stories and I always enjoy the experience!

This was so good. Loved this story so much. The love between these two was smoking and even though it was thought to only be a fake match they followed there heart and got there HEA. Loved the narration it was amazing and exciting. Loved it can’t wait for more.