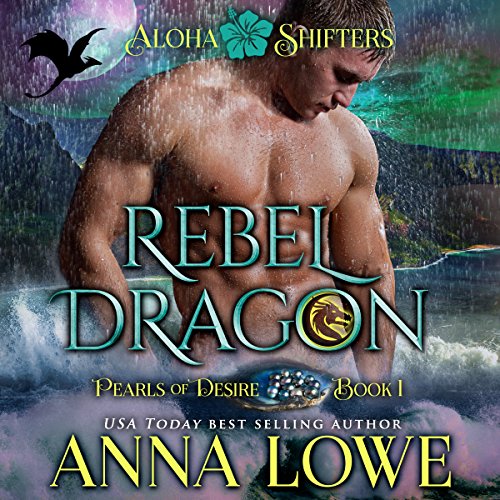 Can this rebel dragon learn to play by the rules when his destined mate’s life is at stake?

Off to Maui for a relaxing vacation? Surfer Jenna Monroe can only wish now that she’s on the run from a stalker who lusts after her blood. Instead of combing the beach for lost treasures, she’s forced to venture deep into the terrifying world of shapeshifters. There, even the good guys are hard to trust - all except for one hot rebel she can’t get out of her head.

Connor Hoving and his band of Special Forces shifters were planning to leave trouble behind by moving to Maui, but destiny has other ideas. His whole future - and that of his brothers - depends on acing his new job as head of security at an exclusive seaside estate. But Connor can barely get his inner dragon to focus with alluring, off-limits Jenna around. Can this rebel dragon learn to play by the rules when his fated mate’s life is at stake?

The closer Connor and Jenna become, the higher forbidden passions blaze. The more they give in to simmering desire, the more impossible love seems. And the more secrets they uncover, the closer their enemies creep. Vampires and ruthless dragons lurk in the shadows, and it’s impossible to tell whose side fate will take. Only one thing is certain: great heroes don’t get to pick their destinies - only the choices they make.

Aloha Shifters: Pearls of Desire is a series of sizzling paranormal romances with adult content. This series spins off from Aloha Shifters: Jewels of the Heart. It’s fun to hear each series in order, but any of the books can be heard as a standalone title in its own right. Just be warned: hot alpha shifters, ruthless enemies, and unveiled desires ahead!

OMG I love this

OMG Anna lowe has a new series and if the rest are as good as this one wow!
Jenna is the sister of Jody who is mated to Cruz from the last series and they are both tiger shifters. But Jenna is a human and mermaid mix, she also has a stalker out to get her so she runs to Maui for help.
Connor and his team are ex special forces who want to make a new lifeature for themselves. He is also a dragon shifter who has come to work security at Koa Point the same place Jenna ran to for safety. Destiny is at work!
I LOVE this story! Great characters their so easy to connect to. Awesome action, drama, mystery, intrigue, suspense, twist, turns and soooooo much more. It's amazing. I couldn't put it down! kelsey Osborne makes the story spring to life it was so much fun to hear it.

Ms Lowe is an awesome author with a great imagination and she creates great characters. She did a great job in building suspense, especially when Jenna dove in the water. At that point, I kept expecting something or someone to grab her. The book is written so that the audiobook version plays out like a movie in your head. Kelsey Osbourne did a good job with the narration. I was given this free review copy audiobook at my request and have voluntarily left this review.

Another awesome read by Ms. Lowe. This author comes up with the best characters. People if real you would want to hang out with. I loved Jenna and Connor. There's nothing better then a book with sexy, strong, alpha males and fun, feisty, strong women. I highly recommend this book and author.

I absolutely love Anna Lowe's books and this new series is starting off right! I love Connor and Jenna together! Their chemistry was off the charts! Their story had just the right bit of heat and sassiness! There is always a bit of mystery and intrigue to go along with the romantic journey! I loved the first Aloha Shifter series-Jewels of the Heart, and like that we get to see those characters in this series too!

I listened to the audio book narrated by Kelsey Osbourne. She does a spectacular job in voicing everybody. I am sure it was hectic when big meetings occur and all these shifters are talking! I highly recommend listening to this and all of Anna's books!

I can't wait to get my hands on all the new shifters stories in this new Pearls of Desire series!

Don't Stop 'Dragon' My Heart Around! 👍

Call me wierd, but I love a great stalker book. I love the suspense, the romance of the hero that saves the day and even clueless heroines. Anna writes so that I want to keep on reading.. or in this case, keep on listening.

The setting is again in beautiful Hawaii and as always wonderfully described along with each character. No cliffhanger which is always nice especially in a series.

"I was given this free review copy audiobook at my request and have voluntarily left this review...it's my review and I'll say what I mean, good or bad."

Wow! Jenna and Connor are terrific characters! This is a great start to a new series. It is so good to get glimpses of the previous characters. What is not to love about Hawaii? Lots of action and adventure. I love the narration as well.

Lovely start to a new series

I loved the first Aloha Shifters series, Jewels of the Heart, and I am very happy that we are staying on Maui for this series. All my favorite shifters are still around, along with some great new ones.

Connor feels he has something to prove and a lot to lose if his new job goes wrong. When he meets a woman on the plane to Maui, a woman who is obviously scared of someone or something, his dragon goes crazy. He would love to get to know her and find out what is wrong, but he can't afford to get distracted. His brothers are depending on him and he doesn't want to let them down.

Jenna is fleeing California for Maui, and her sister, in the hopes that her stalker will stay on the mainland. She is surprised when a hot guy is her seatmate on the flight. For some reason she feels safe with him and finally gets some sleep. She is too cautious of strangers to ask for his number, but she sure wouldn't mind seeing him again. She just didn't expect to run into him the next morning on her way to breakfast!

I will not spoil the story for you as it is very good. I can't wait for the next one. I was gifted a copy of this audio book by the author. I love the narrator and listen to the whole thing, even though I have already read the book. I always hear something I missed before. Enjoy.

I have to admit that I read this book shortly before listening to the
audio version and although I knew the story it was so much better
closing my eyes and listening to it being performed by Kelsey Osborne,
she brings the characters and the places to life beautifully.

This book is the first in a new series which is a spinoff from her
Jewels of the Heart series and is again set in Hawaii. But don't worry
if by any chance you've missed "Jewels" it not necessary for you to
have read or listened to them to enjoy this book. Having said that you
really should, because it's one of the best series I personally have
ever listened to because of the incredible descriptive quality of Anna
Lowe's writing style.

Anyway back to this book - it is a fantastic start to a series, the
writing is excellent as you would expect from Anna Lowe, her
descriptions bring the settings to life so vividly. Her characters
have such depth and the plot line is very good. The two main
characters in this book are Jenna (who is the sister of Jodi who we
met in the previous series) and Connor who is a dragon shifter.

Jenna is going to Maui, for a month to work with her sister but also
to get away from a stalker who she believes may be a vampire! Being
human she has no idea that shifters exist or that her sister is mated
to one, it's hard enough accepting that Vampires are real! Or that the
place she is going to live contains various types, dragons, wolves,
bears and tigers to name but a few. On the plane over she meets Connor
who immediately makes her feel safe for the first time since her
stalker began messaging her. Connor also feels drawn to this beautiful
human in the seat next to him neither of them realise that they are
headed to the same place. Connor is going to work at a private estate
as head of security, he will be joined there by his "brothers", a wolf
shifter, a bear shifter and his best friend a lion shifter. He is
determined to do a good job and let nothing stand in his way but.....
destiny has other plans.

Once Jenna is told the truth by Jodie and about shifters she realises
that Connor must be one too, but what type? Into this mix we have to
throw an evil dragon who has designs on we know not what? The stalker
finding Jenna again and the undeniable attraction growing between
Jenna and Connor.

Will their love be enough to survive all threats? Will Jenna be able
to accept that Connor is a dragon, but has no pedigree? This was such
a great story - I can't recommend it highly enough, I also can't say
any more without spoiling your enjoyment of the story.

One last thing I will say, BUY IT you will not be disappointed, but be
warned you will get hooked!

I was given this book as a gift and am voluntarily writing my review.

This dragon will light your heart

Book 1 in a new spin off series . Book 1 is set in Hawaii. It’s about an Alpha Dragon that will grab your ears and heart. There are hot scenes and lots of twists and turns. Both the hero and heroine are strong , likeable and know what’s impossible to them. They are willing to do anything to make things right.
Hero is Connor. Heroine is Jenna

Connor has a mission, which he knows he can do . He’s hired to protect the little ones and mates from the original story , the strong shifters . He’s flying in when he first sees Jenna , they hit it off , there is an attraction there. He finds out that Jenna is on her way to Hawaii also, but Connor thinks he will never see Jenna again. Connor also notices that someone is following Jenna .... why ? ? . They go their separate ways. Do they meet up again ? Who was Jenna seeing . Does Connor do his mission. Grab it and listen to a heart grabbing story .

Kelsey performance was great . She did this spin off like she did the original series. Strong and Clear

Anna Lowe is a wonderful writer and Kelsey Osborne does a great job at giving the characters a voice. Rebel Dragon is the perfect blend of reality and paranormal, tender and tough, and sexy without too much sex.