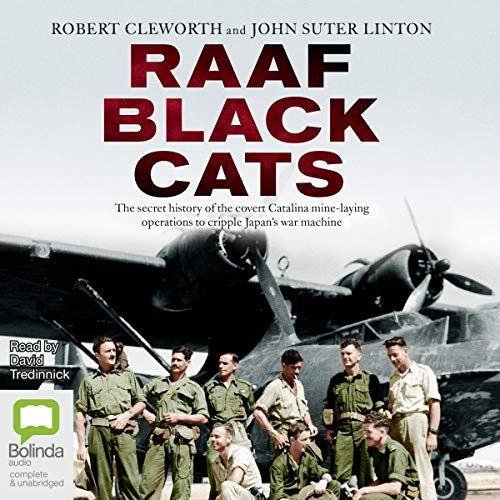 The secret and dangerous operations of Australia's Pacific War Catalina crews told for the first time.

RAAF Black Cats chronicles a little-known yet crucial and courageous chapter in Australia's war history. While this story involved Australia and the United States, very few people on either side of the Pacific know of the significance the RAAF Catalina Squadrons had on the outcome of the war against Japan and General Douglas MacArthur's triumphant 'return' to the Philippines.

Between 22 April 1943 and 1 July 1945, the crews of the RAAF's PBY Flying Boat (Catalina) squadrons in coalition with the US 7th Fleet conducted top-secret covert mine-laying missions in the South Pacific to disrupt Japanese naval supply and military operations. General Douglas MacArthur, particularly, believed mine-laying would be an effective weapon to stop the Japanese from supplying their forces, feeding their war machine and, therefore, softening the enemy for US Army and Marine landings. He was proved right.

This is the powerful story of the brave Australian crews who flew some of the most dangerous missions of the Pacific War.

The Bravest of Men

What a spectacular and most fascinating book. The Aussies are amongst the toughest of men. And most certainly, in the generation of WW2, dubbed "the greatest generation" for a reason, the RAAF Catalina Squadron was amongst the bravest. The book begins with search for Reg Cleworth, the missing brother of Bob Cleworth, who was a part of the secret mine laying operation in WW2. Reg never made it home, and in 1947, was officially presumed dead. However, his family never knew what he really did during the war. Thus the story of discovery begins with this squadron, who did some of the most dangerous work for the Allies in the Pacific. Mine laying was perilous, and thanks to Reg and the many of others who did the work, the Japanese were stopped. David Tredinnick does a wonderful job narrating. It's pure heaven to listen to an Australian narrator telling such a vital story.