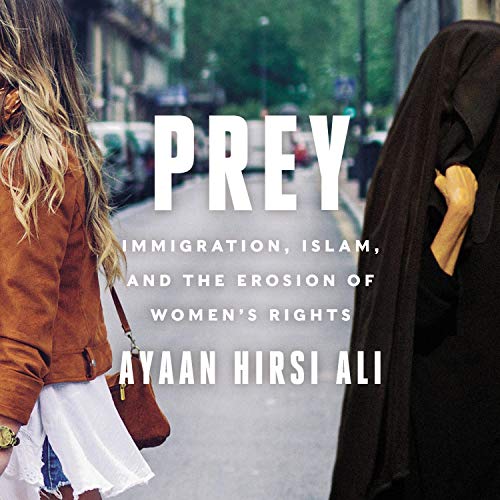 Why are so few people talking about the eruption of sexual violence and harassment in Europe’s cities? No one in a position of power wants to admit that the problem is linked to the arrival of several million migrants—most of them young men—from Muslim-majority countries.

In Prey, the best-selling author of Infidel, Ayaan Hirsi Ali, presents startling statistics, criminal cases and personal testimony. Among these facts: In 2014, sexual violence in Western Europe surged following a period of stability. In 2018 Germany, “offences against sexual self-determination” rose 36 percent from their 2014 rate; nearly two-fifths of the suspects were non-German. In Austria in 2017, asylum-seekers were suspects in 11 percent of all reported rapes and sexual harassment cases, despite making up less than 1 percent of the total population.

This violence isn’t a figment of alt-right propaganda, Hirsi Ali insists, even if neo-Nazis exaggerate it. It’s a real problem that Europe—and the world—cannot continue to ignore. She explains why so many young Muslim men who arrive in Europe engage in sexual harassment and violence, tracing the roots of sexual violence in the Muslim world from institutionalized polygamy to the lack of legal and religious protections for women.

A refugee herself, Hirsi Ali is not against immigration. As a child in Somalia, she suffered female genital mutilation; as a young girl in Saudi Arabia, she was made to feel acutely aware of her own vulnerability. Immigration, she argues, requires integration and assimilation. She wants Europeans to reform their broken system—and for Americans to learn from European mistakes. If this doesn’t happen, the calls to exclude new Muslim migrants from Western countries will only grow louder.

Deeply researched and featuring fresh and often shocking revelations, Prey uncovers a sexual assault and harassment crisis in Europe that is turning the clock on women’s rights much further back than the #MeToo movement is advancing it.

In Prey, Ayaan Hirsi Ali shines a critical, but highly compassionate, light on the issue of Muslim immigration in Europe and how it affects women’s rights and freedoms. This is essential reading for feminists.

"A Powerful Realty That Could Happen in the US"

An important book everyone woman should read! European women are dealing with a lot of 5he issues the book Prey talks about. A must read!

Ayaan Hirsi Ali's newest book, "Prey", while researched and well-thought out for what Ayaan wanted to say to address the problems she was addressing, adding stories and examples of laws and loopholes that are used by immigrants, leaves you waiting with bated breath, waiting for Hirsi Ali to give concise solutions to the problems that she sees. It also, however, educates the reader to understand that the first problem to be solved is: citizens have not recognized what is actually going on in Europe AND that what is going on IS a problem, further exacerbated by other problems of sexism, patriarchy, rape culture, porn culture, etc. The book seems like a broken record in many ways, in the sense that, Hirsi Ali recounts some stories that we've heard before (those that made international press), societal problems, problematic cultural norms, religious values and political yo-yoing of problems and legislative impotence to deal with violence, etc. What is different about Hirsi Ali's book, however, is that "Prey" superimposes the "broken record" parts of Hirsi Ali's monograph with the issues of increased immigration and specifically with increased immigration from Muslim-majority cultures to demonstrate how immigration is changing Europe and women's rights in Europe. This book is not only a study on these issues: it is a warning to Europe and the entire world to pay attention and understand how mass immigration has, is and will continue, to change their cultures, permanently, for better and for worse.

Intensive, long term, footnote documented research on difficult current issues by someone who then tried to apply solutions at the community and national level and who documents the threats to her life from doing such. Worth the time to seriously consider the proposed suggestions.

Necessary Info, Tough to Get Through

The content is rich with statistics and a thorough analysis of the data that gives a tough, but fair reality. Hirsi Ali’s delivery, while authoritative and clearly knowledgeable, was the only weak point for me, but I think another reader would do this content a disservice. Chock this up to personal preference. It’s easily a 4/5 for me, though the content is definitely triggering for some and Hirsi Ali’s reading may be difficult for some to follow.

I have been reading and chewing on Hirsi Ali's work for a decade now. She is always well-researched, well-written, and thought and action provoking. I'm only giving four stars because I really wanted to hear her thoughts on America: contrasting and comparing our situation to Europe's, which she only did in passing. Maybe I'll run into her in a coffee shop someday and will get to ask her!

What an amazing factual book. As an European and American citizen I can see what is happening and what slowly has been happening in the last 20 years but even more since 2015. Still, to be able to actually hear all this numbers and the data is unbelievable. I too wonder where are all the so called femenists whenever there is a gang rape in Europe which there are a lot clearly, where are they when women’s rights do not even exist in many Muslim countries and I could go on and on. Being a feminist is not to walk with a vagina hat in your head, but to defend women universally even when it means not accepting cultures that diminish woman. If they move here they should adapt. I am a legal immigrant and now enjoy the privileges of dual citizenship, I worked for it and have adapted.

Not sure what I was expecting, but definitely NOT

Hmmmm, not sure what to say about this book but it definitely was not a good audio book. Perhaps it would have been better in a hard copy format if a person was looking at statistics and such for maybe a research project?

An incredibly important book. Difficult to hear the summations of crimes against women but powerful. The last 3 chapters should be required reading for everyone!!!

I loved this book. I listened to 2 of her other books read by her and I loved them. However, I agree with other reviews that this one should have been read by someone else. Since there is a lot of numbers and more technical words, a native english speaker would have been less distracting.

Thank you Mrs Hirsi Ali for your truly remarkable effort to to build a barrier against the emotional but unreasonable appeasement policies regarding migration and integration in the western countries. These policies are taking place against the will of large majorities of the populations in the west. Women are the most negatively effected group.

I hope this new title from Ayaan Hirsi Ali will get many readers among politicians in all of Europe. Especially, I hope that there will be German politicians, and I don't just mean AfD-politicians, who will read it. Being a Danish citizen, the example, which Hirsi Ali also gives, of Mette Frederiksen and her Social Democratic Party, which now clearly advocates a stringent and non-lenient immigration policy, has more or less decimated the Danish People's Party and seen a return of their former voters. Maybe Angela Merkel should try her political tactic of asymmetric demobilisation, as she did with nuclear energy, on the question of immigration.
Ayan Hirsi Ali suggests in the end that the international conventions about refugees, immigrants etc should be rescinded. I'm not a well versed in the intricacies of international law and conventions, but I do believe that those conventions were written at a time and by people, who didn't know, what their import would be. It could be a prime example where, with a paraphrasing borrowed from Nietzsche's "The Use and Misuse of History", that the living are being buried by the dead. Of course, one could also be jubilant about the extension of rights to refugees and immigrants and see it as an increase in the welfare of more people as the circle of concern of our laws and morals are cast ever wider and encompassing ever more. Yet, I do think, it is un-mistakenly the case that the current immigration to Europe hurts the integration, the trust in society, our prosperity, women's rights and gay rights and more. People are right to be concerned.
I hope that ordinary politicians - on the entire political spectrum - in the coming years can be permitted to speak in plaintext about the problems of immigration, without having to fear being called out as being a racist, xenophobe or islamophob or what have you, fearing their statements will be careerending statements. I suspect that for the European Union, dealing adquately, and for the European populations satisfactorily, with the question of immigration, will be decisive for its continued existence in its present form. I've always been in favor of the European Union, but if it fails on this issue that would change. But, I don't believe the European legislation or political will is in place to deal with the issue. Hirsi Ali's suggestions about rescinding the conventions and predicating immigration upon proven ability to assimilate and contributing to the European economy are not, in my optics, xenophobic ideas, but more in an enlightened and rational tradition.

Ayan Hirsi Ali serves us both with statstics from European countries, which she carefully assesses and with narratives and anecdotes from courtrooms, segregated neighborhoods and about grooming gangs and the heightened insecurity and lesser liberal freedoms experienced by especially women, but also homosexuals, journalists and people in general - there are now places that are no-go zones. Anecdotes and narratives are not necessarily truth, but one also has to recognize that effective and engaging writing needs more than statistics, but also anecdotes and narratives, which are representative in order to tap into our evolutionary evolved brain with its taste for narratives and its reliance on the availability heuristic. And Hirsi Ali is cautious and presents her narratives, which are both telling and troubling, with qualifiers and without demonizing.
The audiobook was so good that it has qualified for a repetition and a paperback version for my library.

she fakes statistics really bad and suggests just to colour migration in western colour as if their nature is violent against women and the solution is to take their children and make them European. struggled to finish it, because she and her gang (Hamid abdulsamad ... etc) are describing the existing problems in a way that devils any noneuropean person.