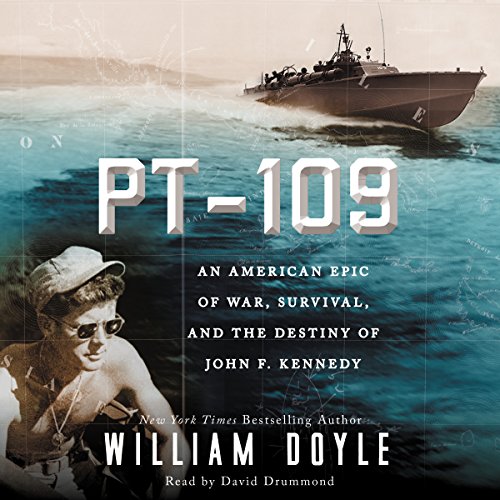 A thrilling, moment-by-moment account of one of the most famous events of World War II - the sinking of PT-109 and John F. Kennedy's heroic actions that saved his crew - and a fascinating examination of how that extraordinary episode shaped the future president's life.

At 2:00 a.m. on the moonless night of August 2, 1943, US Patrol Torpedo boat PT-109, captained by Lieutenant John F. Kennedy, was struck by the Japanese destroyer Amagiri near the Solomon Islands. The American ship was cleaved in two and rocked by an explosion; two crew members died instantly; the remaining 11 survivors clung to the sinking wreckage, adrift in enemy waters. Despite injuring his back, Lt. Kennedy - towing a severely burned sailor by the strap of a life jacket - led his battered and exhausted men on a harrowing three-and-a-half mile swim to a tiny, uninhabited island. Desperate for food and water, Kennedy set off on a solo reconnaissance mission, scouting two larger islands two and a half miles away. Discovering water and coconuts, he returned for his men. For six days they lived off coconuts and kept out of sight of passing Japanese patrols until they were rescued.

Drawing on new information from the American rescuers and recently released archives in both Japan and the US, PT-109 recounts this event in breathtaking detail and explores the incident's remarkable aftermath on JFK's life and legend. William Doyle reveals that while the incident transformed JFK into a war hero and helped propel him to the US Senate and the White House, the wounds he suffered during that harrowing week continued to haunt him, physically and psychologically.

Hagiography, but a good one

JFK is painted as almost otherworldly here. The book is accurate, but it gets drippy at the end.

Takes the story of the PT 109 and shows from beginning to end the impact it had on her commanding officer. A must own for any JFW or WW2 history reader.

One of the most detailed accounts of the loss of the PT 109 and JFK's heroic recovery. Seems to be well researched using modern and first hand sources. The book also provides background on Kennedy's upbringing and much subsequent history. Although hagiographic, it does not gloss over JFK's flaws. You may not agree with the author's conclusion that the loss of the 109 was the major incident informing the rest of his life, but JFK's courage, calm, resolve, leadership and regard for his crew cannot be gainsaid,

An excellent history and performance — well researched. I recommend this book for its portrayal of the conditions in ww2 South Pacific, of the Kennedy family in general and JFK in particular and the interwoven story and impact on us history ... a good companion read is PT-105.

I admit I didn't know much about the story of the PT-109 beyond the basics before listening to this book. Doyle manages to tell the story in a way that's both exciting and thorough. He may place a little too much importance on the event in terms of the remainder of JFK's trajectory, but that's not unexpected from a thesis like this. Very interesting to get a Japanese perspective as well.

Story is about JFK of which PT109 was a part

I felt that the story had too much detail and too many names to be a good e-book. It would be more suitable for a book seen as a documentary of the history of JFK.

Superbly told story of John F. Kennedy in WWII and the loss of his PT boat in the Blackett Strait in 1943 in the story that became the foundation of his future political career. This is one of those books that you can’t wait to get back to at the end of each day.