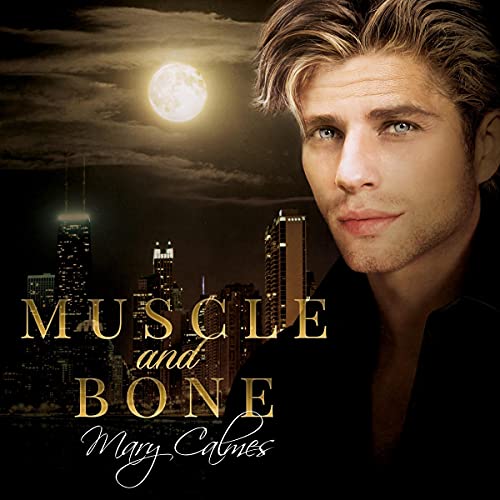 You belong to me and I know it down deep, in muscle and bone, where my wolf lives.

Avery Rhine isn’t an average homicide detective with the Chicago PD. In fact, Avery isn’t an average anything. Sure, as an omega he knows he’s at the bottom of the food chain, but that’s never slowed him down. He’s got a great life, complete with a loving family and a best friend who’d take a bullet for him, so what more could he possibly want or need? Except, maybe, for the world to change. And to find someone to spend more than one night with, but that isn’t high on his list of priorities. He’s never been one to believe in destiny or whatever else the fantasies sell about there being someone special out there meant just for him.

Then a chance encounter at a party changes everything.

Graeme Davenport has no delusions about finding his true mate. The consensus is that if an alpha doesn’t find their other half by the time they’re 30, the chances of it ever happening go from slim to none. He’s not a mere alpha, though; Graeme is a cyne who sits at the pinnacle of lupine hierarchy, so he’s obligated by tradition and duty to choose an omega now, sign a contract, and bond with him. Love is not part of the equation.

When Graeme and Avery meet, their fierce attraction to each other flies in the face of reason and logic. Avery’s intense physical reaction to the alpha is something he’s never experienced before, while Graeme, who has always been the soul of discretion, loses all his inhibitions to desire for the man he wants to possess. They are two very different men trying to navigate expectations, separate reason from innate primal drive, and do it while working together to solve a murder.

It will take everything they are to find a middle ground, and to learn to trust in a fated kind of love.

What a Calmes-ing breath of fresh air!

The premise of this sounded good to me, but if I’ve said it once (I’ve said it a thousand times, blah blah…), Mary Calmes and I have a volatile relationship. Whether or not I like one of her books depends on how frustrated I am with her MC’s and the common theme with them: seemingly perfect, loved by everyone heroes that are completely clueless in the most asinine ways. Also, the level of ridiculousness surrounding the MC’s plays a part, as well. I can count on one hand the number of her books I would consider revisiting and still have a finger or two left. But this book? I am 100% impressed. While the MC is beloved, he isn’t overwhelmingly perfect, completely blind, or constantly putting himself in stupid situations where he should know better. It’s also not a tale of “will they or won’t they,” which I appreciate more than anyone knows, and contains a very original storyline, as Calmes is wont to do. It’s also intriguing enough that, should this become a series (Lynnie and Wade, anyone?), I will happily continue on as long as a) the next book isn’t a continuation of these MC’s and b) it doesn’t devolve into such ridiculousness as Sam and Jory’s relationship that makes me want to lob off my head. This was exactly the kind of book I’ve been needing from Calmes and I’m thrilled to have found it. And really, can anyone say anything bad about Greg Boudreaux? Not me, for sure. The man is a rockstar behind the mic! Definitely worth a blind credit!

Both good and bad

I'll state that I'm not a fan of Mary Calmes' books for the most part. There's only one of their books that I actually liked. However, I liked the description for this one and I love the narrator's ability to give different characters voices, so I gave it a try.

I'm still confused on whether I liked it or not.

First off, the majority - and I'm talking all but the last 5% - took place in 24 hours, which was good pacing for the story. As long as you realize that this is a true mates book, as in the two characters meet and know instantly they're mates. I've read all sorts of those and most are unbelievable - this one was believable the way it was written.

However... there are a couple issues with the plot points that annoyed me. First, our alpha was acting bipolar at times. First off "All omegas need rights" and the author made sure we saw how much he wanted that. Then, suddenly, he had an omega mate and the idea of omegas needing rights was GONE. One could say he was crazed by the fact his omega had walked away and he hadn't put his mark on him yet, but the way it was written, it was more like he had two personalities. The next time he saw his mate, he was all for "all omegas deserve rights" again. That was confusing.

Second - The climax. It felt like the author couldn't really figure out who to blame for the murders, so they blamed several people instead. And their reasoning was poor.

Third - Graeme is a syne, right? Which means his word is law. And we had heard many times that IF an alpha had sex with an omega without a contract, that alpha was dead wolf walking. Then suddenly they're at an omega/alpha sex party where alphas everywhere are taking omegas in heat. The cops were incensed. But Graeme? For all of what he'd said through the book, he should be incensed and come down on the party. Instead, he takes it all with a grain of salt "the omegas asked for it" when he was the one who understood about omegas in heat. That plotting was bad, deplorable. the author needed to make the party okay, even though it was against wolf law, so suddenly Graeme's all "The omegas are adults. It's their choice." Uh what? Total 180 degree turn from everything we'd learned so far about this universe.

The plot points really dragged the story down (just like they do in all Calmes stories). If they had stayed true, if the author had found another way to get where they wanted their characters to be without breaking the plot and giving it major holes, I could have enjoyed this story. Instead, I"m left ambivalent about it.

I liked the characters, especially Avery's partner and family. But the holes really ruined the tale for me.

Greg Boudreaux's performance was wonderful. I loved how he made the narrative from Graeme's POV different from the narrative in Avery's POV. The characters voices were wonderfully diverse.

So a 5 star rating for the narrator. 2 stars for the author. The author isn't getting better at their writing (plot holing) style. They need to take some classes on plot. Because they've got great ideas. They just need to get better at making sure the plot carries through.

Too Good for Words

I know it's a long shot, but I would love a book 2 to this book!! It has so much potential to be a great series. Both main characters and even the side characters were great, and of course Greg Boudreaux was fantastic as usual. Not going to lie the world building had me a little confused when it came to the Omega laws and some of the words, but that could just be since this was an audible and I didn't have the books glossary to look at. Both Avery and Graham compliment each other and I would love to see their story, and well as everyone else continue. ❤

Mary Calmes is the best at creating new worlds to visit. Her characters, not just the main characters, but even all of the secondary characters, are so well portrayed that you feel them all. This book had laughter, tears, and drama. I loved it! Now, take a wonderful book and give it to Greg Boudreaux, and you have magic. He brings another full color dimension to the written word. This was a good read and a great listen. Don't miss it.

Can't wait for the next!

I really enjoyed this audio recording. I had read the book before and Greg Boudreaux is a rock star narrator. I hope we get Wade and Linden's book next. Recommended.

Love this story, An uncommon omega finds his mate ! great story , hard to put down hope she makes more! could be turned in to mystery that this omega cop and his partner solve . All kinds of twists and turns, in this story.

I thought this story was magnificent. This author has a way of bringing out a story that keeps you sucked in. I loved the paranormal aspect and the way she weaves the their shifter life into human life. The mystery and suspense kept me on my toes and the characters were wonderful.

Of course Greg Boudreaux nails it with narration as always and continues to be an absolute favorite of mine.

If your into Furrys or sub dom lovemaking with a little bit of story mixed in this a great book for you. I lost interest after the author tried to justify brutal sex. Even if it’s just a part of the world that was created. I don’t ever want to visit this one again.

Nice to hear a book that the MC's are at each others throats to start or at odds with each other for some reason. Mary Calmes wrote another book that had limited angst but brimmed with drama, mystery and just enough violence. Thoroughly enjoyed the instant and justified meshing of MC's and in depth explanations of this paranormal world.

And that it was narrated by Greg Boudreaux was icing on the cake.

I love Mary Calmes. Her characters are endearing and her MC POV’S are largely unreliable which makes for a fun read. This is the first time we get a viewpoint from both main characters. Not sure if this will continue but I do feel like this book benefited from a dual POV. Greg Boudreaux is an amazing narrator as always!

I like the characters, the story and especially the narration. But there is WAY too much explaining going on