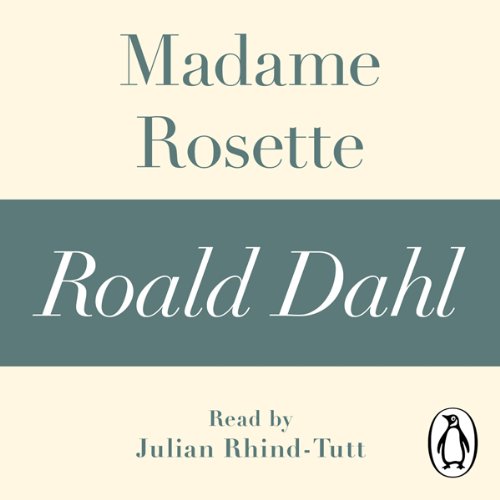 The unabridged, downloadable audiobook edition of Madame Rosette, a short, gripping story of life in wartime from Roald Dahl, the master of the shocking tale. Read by the actor Julian Rhind-Tutt. In Madame Rosette, Roald Dahl, one of the world’s favourite authors, tells of three fighter pilots who go in search of female company and get more than they bargained for - a lot more. Madame Rosette is taken from the short story collection Over to You, which includes nine other dramatic and terrifying tales of life as a wartime fighter pilot, and is drawn from Dahl’s own experiences during the Second World War.

This story is also available as a Penguin ebook. Roald Dahl, the brilliant and worldwide acclaimed author of Charlie and the Chocolate Factory, James and the Giant Peach, Matilda, and many more classics for children, also wrote scores of short stories for adults. These delightfully disturbing tales have often been filmed and were most recently the inspiration for the West End play, Roald Dahl’s Twisted Tales by Jeremy Dyson. Roald Dahl’s stories continue to make readers shiver today. Julian Rhind-Tutt’s television work includes: A Touch of Cloth, The Hour, Green Wing, Clocking Off, Hippies and Keen Eddie. His film work includes: Rush, Notting Hill, Stardust, Lara Croft, Tomorrow Never Dies and The Madness of King George.