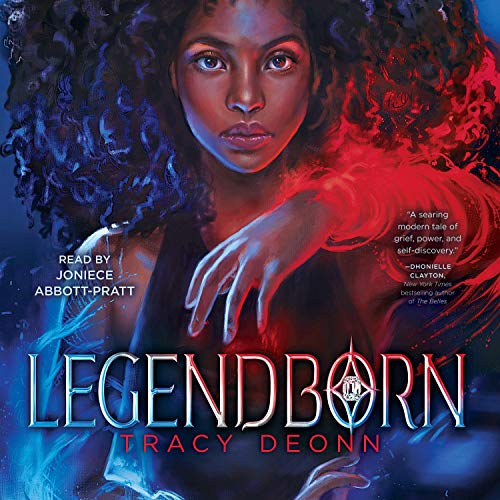 After her mother dies in an accident, 16-year-old Bree Matthews wants nothing to do with her family memories or childhood home. A residential program for bright high schoolers at UNC - Chapel Hill seems like the perfect escape - until Bree witnesses a magical attack her very first night on campus.

A secret society of so called “Legendborn” students that hunt the creatures down.

And a mysterious teenage mage who calls himself a “Merlin” and who attempts - and fails - to wipe Bree’s memory of everything she saw.

The mage’s failure unlocks Bree’s own unique magic and a buried memory with a hidden connection: The night her mother died, another Merlin was at the hospital. Now that Bree knows there’s more to her mother’s death than what’s on the police report, she’ll do whatever it takes to find out the truth, even if that means infiltrating the Legendborn as one of their initiates.

She recruits Nick, a self-exiled Legendborn with his own grudge against the group, and their reluctant partnership pulls them deeper into the society’s secrets - and closer to each other. But when the Legendborn reveal themselves as the descendants of King Arthur’s knights and explain that a magical war is coming, Bree has to decide how far she’ll go for the truth and whether she should use her magic to take the society down - or join the fight.

When I first read that this book was about a black girl in a modern day King Aurther story, I was a little skeptical about how the author would pull it off.

Luckily for me, I was unable to NOT read a story with such a beautiful depiction of black girl magic on the cover. Things started slowly.... slowly and sadly.  However, the author was able to create a story around the Camelot characters that was somewhat believable in modern day times. There are some hiccups and spots that needed more detail behind the "Why" and "How" of the magical world. Overall the story had good bones for a debut.

Now would a REAL teenage black girl go off into the woods with a group of white folks in the heart of Carolina? As a black women who lives in South Carolina, I can tell you that the answer is without a doubt: Hell No!!! And really you shouldnt be going off into the woods with anyone. That is the first rule in the HOW NOT TO GET SERIAL KILLED handbook. But this is fantasy... so lets just ignore that.

With a black main character living in the south, race had to be addressed in some way. In this book's fantasy history storyline, I think the story did well. In the modern day part of the story, I think enough was done. It would appear that the author was trying not to put so much focus on race relations and focused on the magical storyline. I'm completely fine with that. There will be others who feel like race should have been touched on more, but I think that the character was black in descriptions and actions. She acknowledged our history. She incorporated elements of black life and culture.

The magical hierarchy and classifications felt like something was missing. The author skims over the rules and reasoning... but if you think about it after you have finished the book you'll realize that the answers didnt really answer the question. What was the reason for these powers to only manifest between 16 -22... think of the answer in the book.. now ask yourself why is that the case?

The narration by Joniece Abbot-Pratt was excellent. Bree sounded her age, there was distinction between characters, and the flow was well done.

Deonn's words were meant to be heard

The marriage of Tracy Deonn's beautiful but natural writing style and Joniece Abbott-Pratt's thoughtful reading was a match made in heaven. I've never listened to an audiobook that felt more like it was meant to be read allowed.
Bree Matthews is character that you immediately root for and with each turn in her story you become more invested in her success.
In some books, secondary characters don't seem to have motivations outside of how they revolve around the MC. Legendborn has a cast of three dimensional people that you want to know more about and stand on their own, which is a feat for a first-person narrative.
If you are looking for a modern fantasy epic, add this to your must read list now!

Arthur at their finest.

So many places to cringe

Wow. I do not know what I was expecting, but it was not that. I’ll start by saying the narrator was lovely. She provided a rich environment that was not jarring and kept me in the story. However, the story itself? the plot? the characters? Awful. I found myself pausing and laughing far too often at how trite and cliche almost every aspect of this book was.

I won’t spoil the story, but if you want cringy characters and a predictable plot, then this is the perfect story for you. If not, do not bother. Wikipedia can sum it up perfectly without the rest of the drawn out, poorly written excess.

I was absolutely glued to this story and couldn’t stop listening without ripping myself away! The story is an incredibly refreshing take on the genre and it is one of those books where you become one with the narrator and form very personal opinions about all the characters. I want to read all the Tracy Deonn now!! And Jonice Abbott-Pratt so easily became the voice inside my head, portraying emotion and thoughts in a truly believable and captivating manner. WHEN CAN I LISTEN TO BOOK 2?!

I had high hopes before listening to this audiobook. The story line was dull and I could not finish the book.

once I started I could not finish I listened every where. Work, car, home, very good. Hope she bless us with a part 2.

I was not prepared for how this book would end. There were times, like Bri, that’s I wasn’t sure what I was getting into or if I wanted to continue. Bri is the embodiment of black girl magic and her story embodies the resilience of black people and in particular black women. I loved this book!

I need this to be a movie asap. The writing was beautiful, the action exciting, and the conflict had me invested.

Could they have gotten a worse reader?

I'm going to stick to the print version, because I can't take much more of this narrator whining her way through every action sequence in the book. The main character is supposed to be tough and somehow special, but all I get out of this narrator's voice is a cowering, quivering little girl who never should have left home. The book itself, minus the info-dumps, is not bad. If you liked Twilight, you'd like this. Same unhealthy/abusive relationships passed off as a "love triangle" that will almost certainly end with her in the more abusive boy's arms. Representation is great, but you can't just shoehorn it into a mediocre story and expect that alone to save it. Editing out the info dumps, and sorting the secret society into something a bit more coherent would help, though. Hopefully, the author will take such criticism under advisement when writing the rest of the series, because I see I am not alone in this opinion. Just, please, if you want people to connect with the characters at all, FIRE THIS NARRATOR.

Too slow paced, but had a good ending

I was very excited to read this book, but was dissatisfied with it's pacing. I sadly found myself bored for a good chunk of it, BUT I really liked the second half of the book.

I liked the story well enough, even if it is a bit of a slow burner. But the voice acting was so annoying. Especially the main protagonist, who in my eyes is a really strong personality has an inner monologue and speaking mannerism that is constantly overemotional and comes of as on the verge of cracking. It was so jarring with the character, that I really had to fight to get to the end. The voice actress never gave the story a chance to speak for itself with her theatrical antics and I really hope she tones it down for the next part of the series…

The first chapters were a bit to dive through, but wow what a turn!!! Couldn't stop till the end and hope for the next book to be released soon.
Great story, I like the empowering black girl southern history to now and the combination of different stories...
Great book

I couldn’t put it down!

It’s been quite a while since I book have taken my full attention! Looking forward to the sequel! A must read.

Interesting supernatural setting and ideas. I would have preferred some more focus on the supernatural trials and exploration and less on romance (- one star).

The protagonist lives in the south of the US and the everyday racism is sprinkled through the book. I feel this is an authentic depiction of situations that many non-POC would dismiss. The author knows what she is talking about and this can be an eye opener for white readers/listeners.

What you get: Strong female protagonist, good supernatural world building, fights, romance, coping with everyday racism in the southern US