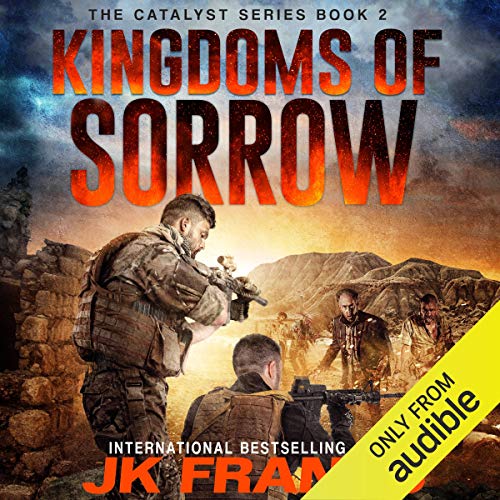 The fight for survival continues in book 2 of the Catalyst series.

A murderous army, an unspeakable plague and an approaching hurricane. One man will risk it all to save his community. Cities, nations, and governments lie in ruins and billions have perished. In the wake of a global apocalypse, survival has become a way of life in a world that seems intent on wiping them all out.

Among the survivors are Scott Montgomery and his friends on the Gulf Coast of Mississippi. They have struggled to hang on better than most. But growing threats - both man-made and natural - leave their chances on a razor's edge. Now with the help of uncertain alliances they must face a new danger none of them saw coming. This group, "The Messengers", are like a biblical plague, destroying everything - and everyone - in their path.

Time is short for the survivors and another grim new discovery means the Messengers may not be the only thing they should fear.

Don’t miss out on the second installment of the best-selling Catalyst series.

If you could sum up Kingdoms of Sorrow in three words, what would they be?

The description of the scenarios as the story progressed

Have you listened to any of Steven Varnum’s other performances before? How does this one compare?

Yes. It was along the same level of professionalism

This book was provided free in exchange for a review. I listened to book one and two of this series. The two books followed seamlessly across the story line. It was good at detailing that not all good guys would survive such a situation and the problems people would face and the challenge to keep any type of community together. The main characters were not perfect but managed to continue and mostly make it happen. The book was left with a real cliff hanger at the end, so I hope there is in fact more books in this series. Very enjoyable and believable. The narrator did an outstanding job on the different characters and even put a good deal of emotion into the performance.

I liked this book.It is the end of the worl as we know it.This is an interesting take on how we would aurvive.Steven Varnum was a good narrator.

Not Happy! I want my credit back.

First book was great.
Prepper based survival story.
The author turned it into crappy zombie story, with this follow up story.

Couldn't finish it.
Audible should let us know in the description that this is a zombie type story.
I want my credit back!

I have not read book one, that being said, I feel this book explains just enough that it is not necessary I do. But I want to! This book does leave you wanting book three since there are some story threads that are left hanging.
I thoroughly enjoyed this semi-unique, realistic dystopian story. The interactions between characters are believable and they are developed enough that I felt involved in their stories. There is some intrigue due to some characters with undefined roles and organizations with unclear motives.
There are no zombies and no long chapters describing how the characters are searching for food.

I really have enjoyed both book one and now this 2nd book of this series.
I love the story line, and all ( most) the characters.
The characters are engaging and well developed. The plot was fast paced. I found this series to be a nice break, and different from other books in this genre. I would recommend this book, but i would read the first book in the series and go from there.

the narrator did an excellent job bringing this story to life!
as did the writer!


I was voluntarily provided this free review copy audiobook by the author, narrator, or publisher.

I'm not sure if a second book in a series has ever been so well written. Franks has become one of my favorite dystopia authors.

Honestly, the first half of the book seemed to lag with all the flashbacks. But after you get through that part the book is great! I'm in love with one of the newest characters, Roosevelt! I'm really looking forward to the next book in this series.

Exciting followup to the first book

This book was given to me for free when I requested the first book in the series, and I provided this voluntary review.

I’m really enjoying the Catalyst series so far. Where book one was more of a setup book Kingdoms of Sorrow really is about the plot and the story. We learn more about the grey shirts and the infection that is occurring in some locations. There are also some vile antagonists in the form of the messengers.

Some of the new characters and perspectives kept the book interesting as well. We get to see Scott’s brother’s interaction with the messengers and follow his journey to try and get to Scott and Harris Springs. Skybox’s pov chapters also were entertaining and gave us some inside information on the grey shirts along with more questions concerning them.

I really enjoy this series, but my one criticism is the books aren’t as real as advertised. Maybe it’s my tech/IT background but any time the author goes into something concerning tech I really have to remind myself this is a work of fiction. I don’t really have a problem with it as I enjoy the books and will be purchasing the following short story and the last book but if there is a real CME I’m pretty sure the internet would not be working.

As far as the narration goes, I think Steve Varnum is an excellent narrator who varies his voice for different characters and sets the tone of each scene in the book very well.

There's more violence in this book than in the previous book in this series, some of it seeming a bit more contrived and unlikely. It does keep the story exciting and suspenseful, though.

Scott and his group are back, and Steven Varnum voices the characters as well as he did in the previous audiobook in this series.

Although not quite a cliffhanger, some major loose ends still remain at the end of this story.

Note: I was given this free review copy audiobook at my request and have voluntarily left this review.

A complete story in a complex world

Kingdoms of Sorrow: Catalyst, Book 2..
I've not read book 1 in the series but it didn't affect my enjoyment of this complete story in a complex post apoc world.
Probably the best post apoc book in quite a few years.
Immerse yourself in this world and enjoy.
I was given a free copy of this audio book at my own request, and voluntarily leave this review.