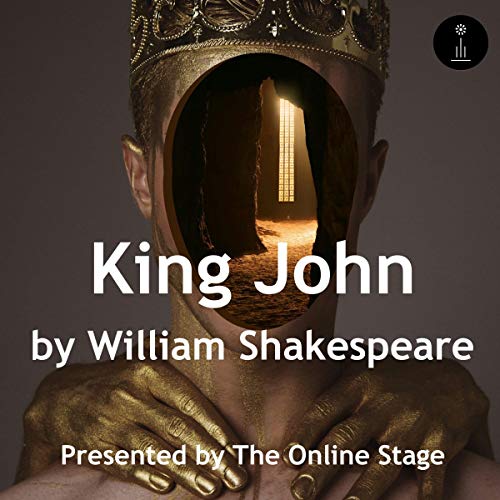 The Life and Death of King John was probably written in the 1590s but not published until the First Folio in 1623.

Of Shakespeare's 11 history plays, King John is the one which deals with the story of a monarch most removed from Shakespeare's time. The historical remoteness of this ruler, and also the fact that he had no genealogical links with the Tudor dynasty, enabled Shakespeare to present him in a warts and allà fashion. The narrative of the play mirrors accords closely with the traditional portrait of a cunning, unscrupulous, vacillating, cruel and irascible sovereign, who managed to alienate his own nobles, France and the Roman Church.

Philip, king of France, claims that Arthur, John's nephew, is the rightful king of England, and threatens war if John will not abdicate. The hot-tempered John contemptuously dismisses this claim and invades France. Full-scale war is about to break out when Hubert, a leading citizen of Angiers, before which both armies are encamped, suggests an ingenious diplomatic solution to the conflict: Philip's son, Lewis, is to marry Blanch, John's niece. By this arrangement, Philip gains territory and John's hold on the English throne will become more secure. All parties accede to this suggestion, except Blanch's mother Constance, and the wedding goes ahead. However, this happy resolution is destroyed by the arrival of Cardinal Pandulph, the legate of the imperialistic Pope Innocent III, who excommunicates John for appointing a bishop of whom the Pope does not approve. Philip decides that his allegiance to Rome is more important than his pact with John, and war breaks out. Later, Lewis invades England at the instigation of Pandulph, who suggests that Lewis' claim to the English throne is as strong as those of John and Arthur. John eventually reconciles with the church, and while a peace agreement between England and France is being arranged by Pandulph, dies, after being poisoned by a rebellious monk.

As a shrewdly incisive portrait of internecine Medieval politics, this play has few equals, and in the character of the Bastard, the illegitimate son of King Richard I, one of the most compelling roles in the Shakespearean canon.

Stage directions read by Elizabeth Klett. The script for the recording has been kindly provided by PlayShakespeare.com. Audio edited by Denis Daly.
Public Domain (P)2017 The Online Stage

If the Bard heard this "performance" he could only hang his head in shame. How atrocious that the best reader was that of the stage direction, which, while well read, were in and of themselves a gross distraction. the phoney accents made the production seem like an episode in the 1960 Batman series: sure, Elenore of Aquitaine was French, but EVERYONE in the Plantagenet court spoke French until Richard II. Was it really necessary to make the greatest female of the middle ages sound like Inspector Clouseau?

No lover of Shakespeare could bear this literary abortion. Avoid my mistake. Spend the time, find a Folger's audiobook, or take a pass. Like a disease, none is better than more.