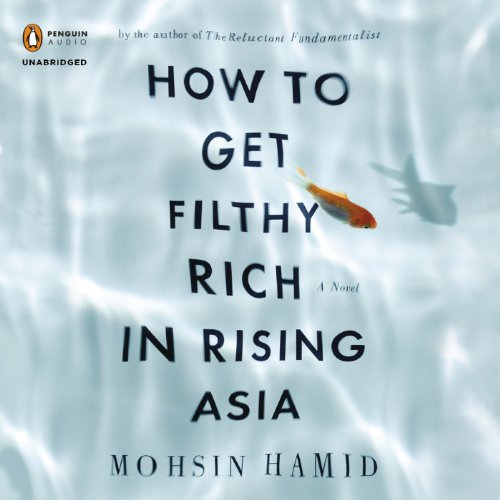 How to Get Filthy Rich in Rising Asia

How to Get Filthy Rich in Rising Asia

From the internationally best-selling author of The Reluctant Fundamentalist, the boldly imagined tale of a poor boy's quest for wealth and love.

His first two novels established Mohsin Hamid as a radically inventive storyteller with his finger on the world's pulse. How to Get Filthy Rich in Rising Asia meets that reputation - and exceeds it. The astonishing and riveting tale of a man's journey from impoverished rural boy to corporate tycoon, it steals its shape from the business self-help books devoured by ambitious youths all over "rising Asia". It follows its nameless hero to the sprawling metropolis where he begins to amass an empire built on that most fluid, and increasingly scarce, of goods: water. Yet his heart remains set on something else, on the pretty girl whose star rises along with his, their paths crossing and recrossing, a lifelong affair sparked and snuffed and sparked again by the forces that careen their fates along.

How to Get Filthy Rich in Rising Asia is a striking slice of contemporary life at a time of crushing upheaval. Romantic without being sentimental, political without being didactic, and spiritual without being religious, it brings an unflinching gaze to the violence and hope it depicts. And it creates two unforgettable characters who find moments of transcendent intimacy in the midst of shattering change.

The title is misleading, I loved this quick read.

I loved this book, which has a sensationalist misleading title. You'd think it was a business book. Really, it's a well crafted "first person" fiction book.

It's the human story of a boy starting in a slum in India, struggling with the challenges of achievement, love, conflict and death.

The author writes the book as if you are the lead character, giving it a very unique quality that I've never experienced in a book before.

This book evoked an emotional response from me on more than one occasion, by the end I was tearing up...not out of sadness though.

It made me laugh out loud a few times.

Highly recommend it. You can finish it in a weekend.

Would you listen to How to Get Filthy Rich in Rising Asia again? Why?

This is an amazing book from an incredible writer. Beautiful imagery. Hamid captures in a subtle reference what other writers spend pages trying to say. I loved this book.

Can't get it out of my head

I listened to this book while travelling in Southern Asia. The characters and feelings are spot on. It was occasionally uncomfortable to listen to, but I can't get it out of my head three weeks after finishing. I love the length as well. Well worth a listen.

Nothing here to capture attention

I listened to this book after Tim Ferris recommended it on his podcast. The story is bland with no real substance to it. There is no emotional attachment to be had with the characters and no plot to follow. Thankfully it is a short book.

The narration matched the story... bland. The author/narrator just drones on with no emotion. I'm sure this was the intended method, trying to say something about the bland story through the bland narration style. This, however, left me bored and unengaged.

As its title suggests, this book works within the frame of a self help or "how to" book. Each chapter is headed with a rule (e.g., "Don't Fall in Love"), and the narrator uses imperatives, addressed to "you," as is typical of the genre. One of the effects of addressing the reader in this manner is to deliberately distance the speaker from the subject of his story, but this is clearly a very personal story of a man rising from abject poverty to wealth and of a woman (known only as "the pretty girl" well into her fifties) whose life intersects with his. So how does one become filthy rich in rising Asia? Through one form of corruption or another: hustling, stealing, prostituting, threatening, payback, demeaning, disloyalty, submission to those even more corrupt than oneself, etc. It's a life shadowed by sadness and anxiety, even when one's efforts succeed. Hamid gives us keen insights into life in "rising Asia" (no exact location or even a country is ever named), a view that contrasts with recent western paranoia about those nations supposedly poised to take over the world's economy. It's a story about the lengths to which desperation drives human beings in an increasingly materialistic world, and about the discovery, in the end, of what is most important to our lives.

I like that this was written in the second person narrative. I quite enjoyed it

A wonderful story and a great lesson!

This is one of those books that everyone should read/hear. Great life lessons and beautifully narrated. My 90 y/o father would enjoy it and my 14 y/o son would learn a lot from it (if he’d get off of his xbox long enough to listen to it). One of the best (out of dozens) to which I’ve listened!

This fictional story is often recommended as a worthwhile read for those who usually focus primarily on nonfiction business books. Despite summaries and reviews which accurately reflect the innovative approach the author uses to tell a life’s story in second person, I still found it surprising, unsettling and ultimately engaging. I didn’t, however, buy into the common hype of this being a necessary parable warning the financially ambitious of a predetermined demise. As I am at the conclusion of every story well told and book well written, I moved to reflect on my own choices, past, present, and future. If you’re dubious of self-help or overblown biographies, there’s a compelling story with amble meat on which to chew here.

Concentrated goodness. A uncommon and sublime combination of vagueness and clarity in a convenient morsel.

Blown away by where the author took me and all the while injecting the true grit of life in the most elegant way.