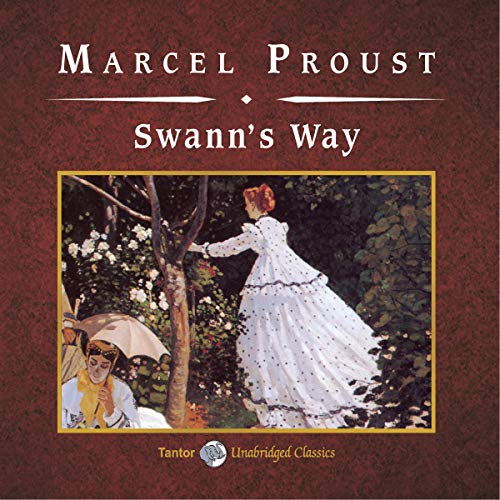 Swann's Way is the first novel of Marcel Proust's seven-volume magnum opus In Search of Lost Time. Following the narrator's opening ruminations about the nature of sleep is one of 20th-century literature’s most famous scenes: the eating of the madeleine soaked in a "decoction of lime-flowers", the associative act from which the remainder of the narrative unfurls.

After elaborate reminiscences about his childhood with relatives in rural Combray and in urban Paris, Proust's narrator recalls a story regarding Charles Swann, a major figure in his Combray childhood, and his escapades in 19th-century privileged Parisian society, revolving around his obsessive love for young socialite Odette de Creacy.

Filled with searing, insightful, and humorous criticisms of French society, this novel showcases Proust's innovative prose style. With narration that alternates between first and third person, Swann's Way unconventionally introduces Proust's recurring themes of memory, love, art, and the human experience - and for nearly a century, audiences have deliciously savored each moment.

Not the newer, far better translation

Because the Audible "release date" is 9-10, I thought this "new" recording must be the Lydia Davis translation. If you glance at the old Moncrief version (this recording, it turns out), youi can see why everyone has said for years, "you've got to read the French to get Proust." But the critics unanimously have praised the new translations for "In Search of Lost Time" series. And Davis' Swann's Way (from 2002!) has had hymns composed in praise.

Yet here we have a "new" release in the old Victorian Moncrief mess that has put so many English readers to sleep. Though I paid for book in December, I didn't start listening until recently and feel deceived and ripped off by Audible's lack of description. Of course, shame on me for thinking recent should mean up to date.

I listen to a LOT of audiobooks -- daily. I often listen as I go about tasks -- gardening, driving, needlework, etc. This production of Swann's Way stopped me in my tracks. It is so rich, so engaging that it requires my full attention and engages my feelings and thoughts wholly. If you thought Proust perhaps less than accessible, dip in to this. Mr. Vance's narration will lead you to that place of memory, longing and insight that may have been Proust's best intention for his work. Savor it. Roll it around on the tongue of your mind. Enjoy.


I've been putting off Proust all my life, but recently I realized that, having read the entire Song of Ice and Fire series straight through not once but twice, I could no longer use the excuse of length as a reason for avoiding “In Search of Lost Time.” Since one of the available audiobooks is read by Simon Vance — always a safe bet — I decided to dip my toe in.

After hearing so much about the series over the years, I was surprised to see that it doesn't actually start with the narrator biting into a cookie. (It starts with him falling asleep while reading in bed.) The narrator — I think we later learn that he’s named Marcel, so I’ll use that name for convenience — remembers the many nights when a family friend named Swann visited, so that Marcel had to go to bed without being tucked in by his mother. To Marcel, this is a trauma bordering on abuse.

We quickly learn that Marcel has a few issues, to put it mildly. To an unhealthy extent, he's obsessed with his mother, with the writer Bergotte, and with the Duchess of Guermantes, who turns out not to be as beautiful in real life as he'd imagined her to be. He is shocked to find a neighbor’s daughter kissing another woman (town gossip has already linked them romantically), and concludes on very little evidence that she must be a sadist. His idealization of women seems to be paving the way for a colossal upset in the future.

After laying this basic groundwork of character, Marcel drops back 15 years to tell the story of Swann and how he happened to marry a woman who is politely described by her friends, or at least by Marcel, as a “courtesan.” To the extent that the novel has a coherent plot, this tale of “Swann in Love” is at the core. And so we find out, rather late in the game, that the bulk of the novel is not really about Marcel at all.

Swann falls in love with Odette, who is not an especially bright or talented woman but who is exceptionally beautiful and has a body that men lust after — something she has been using for years to her financial benefit. They have an agreeable relationship until he ventures into areas of her life that she's reserved for herself. He discovers rivals.

This should be the end of it, but somehow Swann finds it possible to abase himself and carry on the relationship. Then, predictably, another crisis arises and he decides once and for all that he’s done with Odette.

.... except that under the terms of the framing narrative, Swann has married Odette, and they have a daughter old enough to spark a romantic interest in the adolescent Marcel. It may be that somewhere in the remaining 6 volumes of the novel, we learn how this marriage of false minds came about. But for the time being, it just is. The end result is that my experience of reading Proust is one of frustration and disappointment.

I have friends whose opinion I respect who tell me I’m missing the point. Because of that — and because I’ve often been wrong about such things in the past — I’ll plug away for one or two more volumes. The novel has had such a big influence that I feel like I need to know something about it. I’m only sorry none of the other volumes are narrated by Simon Vance, who I think could make a railroad timetable sound interesting.

This book follows what can only be assumed to be the ravings of an Oedipal mama’s boy, with absolutely no point or plot to be seen. Worst possible novel ever written. If I hear Simon Vance say Combray one more time, I might jump from a building.

The Metaphors have back stories

Proust is like an anal enthusiast who goes into an adult book store and tries to prove to the (completely uninterested) counter clerk that he’s “normal” by sandwiching his enema magazine in between four regular hardcore sex ones.
I feel as though I'm being lied to from the get-go. The rhapsodic worship of Society, Culture, Nature, Astheticism and Swann’s financial and emotional slavery to Odette seem to me to be a collection of voluminous beards. So he can sneak in a little vignette about “vicious” lesbians. Or admire some beefy footmen. Without anyone really noticing. But I did.
The whole Swann-Odette love affair seems to me a fable, dreamt up by a gay man who desperately wants to convince the world that he understands heterosexual passion better than anyone has ever done.
I feel as though I’ve traveled through Proust’s effete and insipid society with Colette, that I’ve experienced his aesthetic and icy snobbery, through the Picture of Dorian Gray and his obsessively exquisite perversity through A Rebours. The metaphors are magnificent, but excessive to the point of madness.