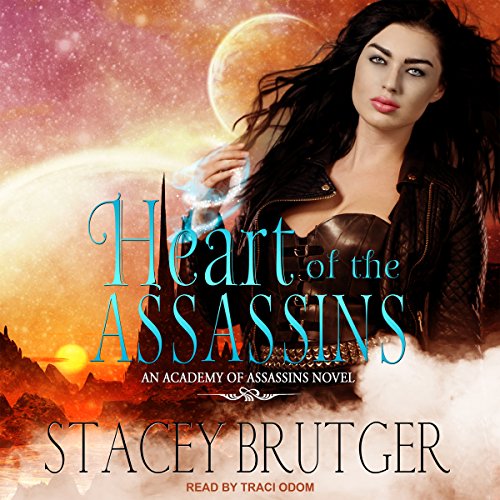 Heart of the Assassins

Morgan has been banned from hunting until she learns to control her powers and her impulsive nature. Her team is so focused on her training, she feels more alone and alienated than ever. She must make the heartbreaking decision to stay and fight for the men who mean everything to her or turn her back on the Academy to survive.

But the choice is taken from her when the Academy is viciously attacked and Morgan is abducted and dumped into the primordial realm. Abandoned and unable to get back to the Academy, Morgan must take a crash course in survival in this alien world.

As she investigates the deadly mist sweeping through the realm, she is horrified to discover her team has followed her, determined to earn back her trust. With their lives in danger, Morgan will do whatever it takes to save them, even if it means entering Tartarus and uncovering the secrets of the forgotten gods.

With the cure in hand, they must defeat monsters from myths and legends - and their worst nightmares - and escape the gates of hell or risk becoming forever trapped and forced to watch the destruction of their world.

I've been in love with this book since the first chapter. The narrator does a good job, although I'm a little put off by how she does accents but that's my only comment. Full of fascinating lore and wonderful world building, I can't get enough of this book. Easily one of my favorite series

Love this slow burn RH. I love the friendship of the group and how even when things get strained, hard or crazy they make up and carry on. This story is full of action, and more hints toward Morgans heritage. Downloading book 3 now.

Heart of the Assassin

Morgan and her guys must figure out how to save the world without getting killed in the process. I really enjoyed this book and how Morgan has grown. She finally gets the nerve to tell the guys about her insecurities and things change between them all. I can't wait to find out more about her powers and what happens next

Idk why people don’t like it or can’t seam to follow it. Not hard to follow at all and the story was very well written. I look farwars to the progression of her relationships with her mates. And what will happen next. 🥰

What a rollercoaster ride!

This second book threw a lot of new characters and places at us in quick succession. There was so much going on that it became a bit overwhelming at times. The characters leave the academy and the entire book is about their crazy journey to save the world.

There is a lot of action but I felt like the story doesn’t flow as smooth as it should have been. The world development was brief and a lot of crazy goes in these new adventures. Some of the turns and twists did not make that much sense to me.

Narration was well done and brought the story to life.

There is still a lot of work that needs to be put into the relationship between our heroine and her men. They seem so disconnected.

Overall, it is a a good book and kept my attention for most of it. I’m hoping things will slow down a bit in the next one so there can be more character development & world building. Their relationships also needs some time to grow and strengthen.

I loved some of the new sidekicks/animals introduced in this book. I’m looking forward to the third book

So glad I stumbled upon this series

The characters are relatable, the bond and connections with each member of the harem build up in a way that is believable, and heroin of the series amazingly strong and smart and doesn’t need to be rescued....what more do you need? I love it.

And the kitchen sink

Half of this book is our heroine's internal worrying, the same thing over and over. Then we get plenty of action, but it all seems pasted together from the usual - the giant spider, mosquito pixies, the insane mastermind, accidentally going over a waterfall, a medusa, a dragon - oh, yes and let's not forget to throw in some zombies! And then there's the worshipful attitude of her harem. It's all just too, too much. Our heroine is morphing and there's plenty more places for a story to go, but I doubt I'll go along for the ride.

Great book! Even better narration. If you are into fantasy reverse harem (one girl, lots of guys) then this is the perfect book.

The main character is a bit of an twat waffle. The "everything is my fault" theme throughout got old real quick. Diving face first into danger without thought was frustrating too.
The elements of the story made me get to this second book and I'd like to see how the relationships develop. Not sure yet if I'll continue the story line though