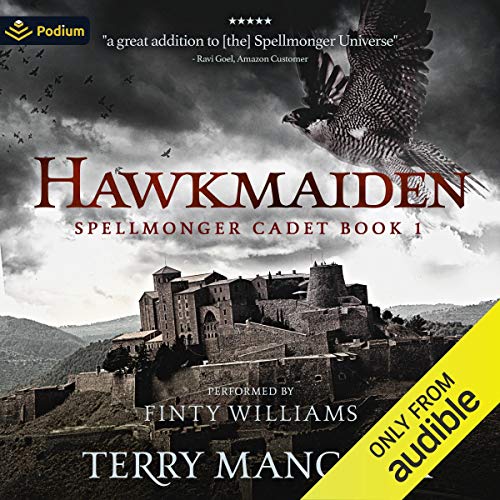 From the moment Dara of Westwood spied the Silver Headed Raptor nesting in Rundeval Peak, the precocious redheaded 12-year-old girl was enchanted. The youngest daughter of the Master of the Wood lived in ramshackle Westwood Hall, in the independently minded Westwood estate of Sevendor. Her determination to capture a baby falcon and train it wasn’t hampered by the fact that Dara had never climbed a mountain, had never been trained in falconry, or even remotely had permission from her father to do it. Dara wanted the falcon...and the only thing in her way was the mountain, an angry mother falcon, and her own fears.

But the daring climb up Rundeval and actually capturing the fledgling falcon is just the beginning of her troubles. Actually learning falconry and training the willful bird is a responsibility she had barely considered. Worse, there is trouble afoot in the domain: A new lord has come to rule over Sevendor and all of her people, replacing the corrupt old Sir Erantal. While everyone welcomes the change, the new lord is a wizard: a magelord, the first of his kind in 400 years: Lord Minalan the Spellmonger. And he’s not alone. He’s brought thousands of oddly dressed Wilderlanders with him, families escaping the wars in the west...and settling in Sevendor.

Within weeks of holding his first court as lord of Sevendor, the wizard's magic begins to cause problems. Magelord Minalan turns Sevendor Castle, the entire mountain of Rundeval, and a good portion of the Westwood - including Dara’s home - into enchanted white stone when a spell goes unexpectedly awry one fateful night. As a result, Dara learns that she, too, may become a mage someday. Soon after she discovers that she can see through her falcon’s eyes and share her thoughts, the talents of a beastmaster, opening up a brilliant new world for her.

The folk of the valley have enough to eat for the first time in a generation, there are wizards all over Sevendor, and the castle glows with a magic light at night. The fortunes of the Westwood estate rise. But the Magelord finds foes as well as friends in Sevendor.

Though prosperity flows from the Magelord’s benevolent rule, the changes are frightening to some who have lost power since the Magelord came. Outside the Westwood, the other natives of the domain are upset by their magical lord and his strange new people, and there are whispers of rebellion. And outside of the domain, the neighboring lords, urged on by sinister forces, conspire to plunge Sevendor into war - with Dara and her family along with it!

What can one girl and her falcon do? When the Magelord leaves on business and his enemies close in on her home, Dara discovers she may hold the answer to saving them all! The fate of the entire domain rests with Dara of Westwood, the girl they’ll call the Hawkmaiden!

The story was good. The Narrator was pretty bad. John Lee does the best job for The Spellmonger series. There were words mispronounced and names said incorrectly. Tough to get over that.

I love the spell monger series and was excited to get more familiar with the Hawkmaiden but I found that it lacked the light hearted humor I love from the books that center around the main character Minolan.

I loved hearing the back story and see things from a different prospective, it was a great addition to the world of the spellmonger.

However one annoying aspect was the narrator, for the most part she was great except there where quite a few inconsistencies with the pronunciation of words.

Hawkmaiden completely satisfies the thirst of old readers familiar with the Spellmonger series while introducing a younger audience to Lenadara and her trusty companion, Frightful. Terry Mancour is unmatched with his ability to turn a side story not involving the main character, something many would be annoyed or angry with (admittedly, myself included) into a fresh point of view of the people surrounding Minalan and his Journey against the evils of Calador.
Hawkmaiden begins just before Minalan arrives in Sevendor and you are introduced to the condition of the native people from the eyes of a young woman who's whole world is dependent on her family's day to day struggle with the current occupants of Sevendor Castle. This side story was fun and interesting, as they all eventually become when they are released.
I was hesitant when it recieved a YA rating, but fear not, fellow Spellmongers, this book is well done. Finity Williams does a wonderful job, becoming a fresh new voice in the series to accompany John Lee. There were a few pronunciations that dont follow the main series, but all in all it was just what the doctor ordered. I will have no hesitation pulling the trigger on the books in this series regardless of the rating. Thanks Terry! You are such a fantastic storyteller!

I am absolutely enamoured of this series. I was a little disappointed when this recording started up and it was not John Lee's voice I heard. I associate his voice with Min so completely. But very quickly I got accustomed to Finty William's delightful voice and skillful narration. She has done an excellent job giving voice to Dara. I am nearly finished with Hawkmaiden and I am distraught that Hawklady doesn't come out for a couple weeks yet!

I was worried going into Hawkmaiden that the series would be watered down by including another perspective. Hawkmaiden is wonderful, with all of the same adventure that the Spellmonger series contains. The character of Dara is richly created and her actions in the previous Spellmonger books are easily connected in between the books. The narrator does a great job in reading for a young person without sounding childish. I’m excited to read the continuation of the story in Hawklady.

The book itself is written well and the different perspective to the storyline is nice, drawing away from that is the miss-pronunciation of already well established terms buy a different voice actor... which isent appealing for a audio book, especially when that book/series is about a quarter length of a original and the same price.

Feels like a money grab and is fustrating to a point where ive almost boycotted the audiobooks as i can go ahead n buy the paperbacks without delay and blatent refusals to publish because of money grab tactics from the publisher. Fans would have bought the books after the series was published anyway this is aggravating and insulting to most.

narrator mispronounced a lot of words

i wish the narrator listen to the original narrator for the series. she mispronounce names and keep saying "villian" instead of "villein". do your homework lady!

As always a great story in the Spellmonger series.

The narrator should have listened to John Lee’s readings of the main series, for the proper pronunciations.

I'm used to the traditional tropes of fantasy literature taking place in a medieval, patriarchal society, but the hero of this story is a 12-year-old girl, so I expected a bit more female empowerment. She has one courageous moment where she climbs a mountain to take a young falcon from its next. Even this action, however, she does with tacit permission from her father and uncle. After this, she devotes herself to training the bird and, apparently, forgets this earlier backbone. She devotes herself to being a good, obedient daughter and worries over the safety of the menfolk (brothers, cousins, uncle, and father). She trusts that the men in her life will rule over her with wise benevolence, and they do. They take into account that she doesn't like embroidery (her one small rebellion), and make sure that she dresses appropriately, learns to curtsey, exhibits no unseemly ambition, and demonstrates cheerful obedience to their will (for the good of the whole community). At one point, the lady of the manor is allowed to organize the defense of their lands. At this point, I'm thinking we'll see some female leadership and I breathe a sigh of relief, but it is not to be. The men grumble, the steward steps in to bolster the lady's authority, and then they muddle through as best they can hoping that their lord will come home soon to save them. The teen boys in this novel become men when they are giving a sword, and the teen girls become women when they menstruate. Boys are destined to be wise leaders. Girls are apparently content to marry and run the kitchen. Our heroine is definitely a one-off as she wants to raise a falcon, but she's largely happy with her lot in life and shows no indication that she wants a sword like her brother. She's a lot like Menolly in Dragonsinger, but at least Menolly knew that the sexist attitudes in her home were unfair.