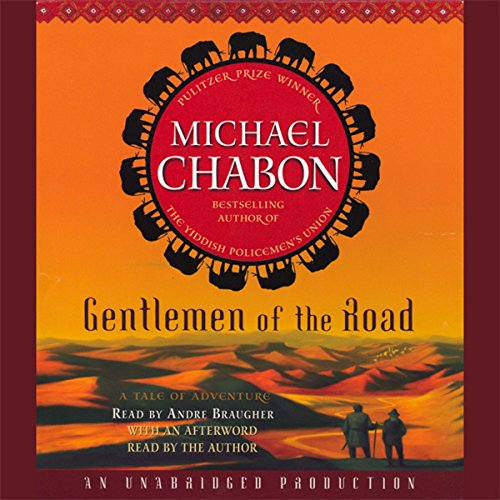 Gentlemen of the Road

They’re an odd pair, to be sure: pale, rail-thin, black-clad Zelikman, a moody, itinerant physician fond of jaunty headgear, and ex-soldier Amram, a gray-haired giant of a man as quick with a razor-tongued witticism as with a sharpened battle-ax.

Brothers under the skin, comrades in arms, they make their rootless way through the Caucasus Mountains, circa a.d. 950, living as they please and surviving however they can - as blades and thieves for hire and as practiced bamboozlers, cheerfully separating the gullible from their money.

But when they are dragooned into service as escorts and defenders to a prince of the Khazar Empire, they soon find themselves the half-willing generals in a full-scale revolution - on a road paved with warriors and whores, evil emperors and extraordinary elephants, secrets, swordplay, and such stuff as the grandest adventures are made of.

Praise for Gentlemen of the Road

“Within a few pages I was happily tangled in [Chabon’s] net of finely filigreed language, seduced by an old-school-style swashbuckling quest.... laced with surprises and humor.” (San Francisco Chronicle)

“[Chabon] is probably the premiere prose stylist - the Updike - of his generation.” (Time)

“The action is intricate and exuberant.... It’s hard to resist its gathering momentum, not to mention the sheer headlong pleasure of Chabon’s language.” (The New York Times Book Review)

"A significant change from Chabon's weightier novels, this dazzling trifle is simply terrific fun." ( Publishers Weekly)
“Chabon’s lush, memorable prose shines here … adventurous readers wishing to experience Chabon’s amazing literary range are in for a thrilling, outrageous joyride.” ( Bookmarks Magazine)
“Michael Chabon can write like a magical spider, effortlessly spinning out elaborate webs of words that ensnare the reader with their beauty and their style.” ( The New York Times)

&quot;All the evil in the world derives from the actions of men acting in a mass against other masses of men.&quot;
- Michael Chabon, Gentlemen of the Road

Jews with Swords? I guess that was Chabon's working title, if Chabon is to be believed. He is a bit unreliable. His prose, however, is delicious. His perspective is always new and fresh. I don't think this is nearly one of his great ones*, but it seems like it might have been the most enjoyable (that I've read so far) for Chabon to write. It is a yarn, a tale, a swashbuckler, a grift, a rollick, a legend. I'm not sure why it hasn't been made into a movie. It is NOT, however, live promotions company, record label and organizer of the global series of Stopover Festivals. That is a different set of Gentlemen.

This short novel seems like some Jewish equivalent to The Princess Bride (yes, I understand that William Goldman is Jewish, but the Princess Bride was not directly a Jewish adventure). Anyway, it was the perfect book to read as I flew from Phoenix to Dallas to start a weeklong eclipse road trip with my brother and Douglas Laux. It was tight and the prose was classic Chabon. One of my favorite things about this book? The chapters:

Andre Braugher has such an expressive voice, he was perfect for this rollicking, swashbuckling story. You could imagine hearing it by candlelight in an old tavern somewhere. Lots of fun.

genre fiction at it's thrilling best

This book is super fun. It's fast paced, light, smart and seamlessly crafted. Gentlemen Of The Road reminds me what it was like when I was a little kid bookworm, devouring trashy paperback adventures from cover to cover.

As a child, old pulp serials were the best thing ever. John Carter, Conan, Tarzan - these books whisked me through their pages with knuckle biting adventure - but somehow you always knew the hero would come out on top, despite his (always his) nagging personal doubts, and the overwhelming odds. The simple characters, and almost familiar plots set in exotic locations thrilled me.

Revisiting the novels as an adult, the experience soured. I found them tedious, xenophobic, sexist, and full of horrid cliches. Truly one of those sad moments of lost innocence.

However, this book captures everything my itty-bitty self adored in those old adventures. Chabon perfectly reinvents the flare and simplicity of bold men and women, clever rapscallions, and cruel villains - all dueling in another time and place. And it ditches all the anachronistic manure found in the old pulps. And it's beautifully written, with a voice that effortlessly glides the reader across the exotic locale and fast paced action.

Pros and cons of the audio version: while the audiobook loses the great spot illustrations of the printed edition, it makes up for that with Andre Braugher's reading. His pacing and the texture of his voice perfectly enhances this story.

Adventure unlike anything else

Very different than Chabon's other books, but outstanding nonetheless.
Braugher's performance is also stunning.
The setting for this adventure story, Kazaria, is a historical empire, but one I had never encountered despite being a history enthusiast.

Enjoyable and short, with delicious diction

My first Chabon book, and what a joy to stumble upon such wonderful descriptions as "unpersuasive shade of a gnarled juniper." Not a masterpiece but highly enjoyable.

for a book presented as a "swashbuckling adventure", "raucous...rank...beguiling", "ridiculously entertaining", i was thankful that this boring book was so short, and even then i was tempted to ditch it. I didn't find the tale to be exciting at all, nor the style to be "sumptuously written". & to draw comparisons with ERB is not really a compliment as, apart from ERB's imagined worlds, (Barsoom Pellucidar Tarzan etc.) , ERB was a terrible stylist. & Braugher is rather uncompelling as a narrator.

Bummer, waste of a credit. Descent story ruined by flowery language and erudite language. This pretentious author has too much time on his hands and has worked hard to show us his superior intellect.

My only complaint is that I want more. Fantastic characters, beautiful prose and an incredible story.

Rogues of 0ld/hearts of gold

The author's style of word flow remind me of
Shakespeare... I have difficulty in understanding the intent. Since I listen to audible books... I rewind and re-listen... I cant do work while listening, but have to concentrate.