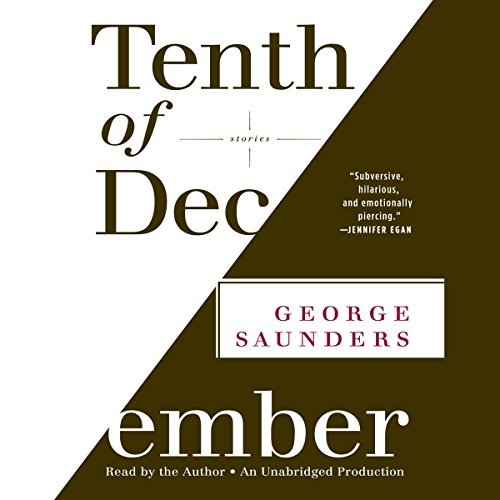 One of the most important and blazingly original writers of his generation, George Saunders is an undisputed master of the short story, and Tenth of December is his most honest, accessible, and moving collection yet.

In the taut opener, "Victory Lap", a boy witnesses the attempted abduction of the girl next door and is faced with a harrowing choice: Does he ignore what he sees, or override years of smothering advice from his parents and act? In "Home", a combat-damaged soldier moves back in with his mother and struggles to reconcile the world he left with the one to which he has returned. And in the title story, a stunning meditation on imagination, memory, and loss, a middle-aged cancer patient walks into the woods to commit suicide, only to encounter a troubled young boy who, over the course of a fateful morning, gives the dying man a final chance to recall who he really is. A hapless, deluded owner of an antiques store; two mothers struggling to do the right thing; a teenage girl whose idealism is challenged by a brutal brush with reality; a man tormented by a series of pharmaceutical experiments that force him to lust, to love, to kill - the unforgettable characters that populate the pages of Tenth of December are vividly and lovingly infused with Saunders’s signature blend of exuberant prose, deep humanity, and stylistic innovation.

Writing brilliantly and profoundly about class, sex, love, loss, work, despair, and war, Saunders cuts to the core of the contemporary experience. These stories take on the big questions and explore the fault lines of our own morality, delving into the questions of what makes us good and what makes us human.

Unsettling, insightful, and hilarious, the stories in Tenth of December - through their manic energy, their focus on what is redeemable in human beings, and their generosity of spirit - not only entertain and delight; they fulfill Chekhov’s dictum that art should "prepare us for tenderness".

Be prepared for something different...but good!

An excellent collection of short stories.

I won't get into the details of the book. There are plenty of reviews that do that. I would like to say that if you have never read George Saunders, his writing style is very unique. He is fresh and original. On paper I would image he may be a little hard to follow. Read out loud though and you get the full effect of his writing. He writes much like people talk and that doesn't always translate into the best reading experience. Because his writing is like no one else, intelligently written and unafraid to go where others fear, it is hard not to like him. All that is required is an open mind.

The author did a good job narrating. Yes, someone else may have done better but his performance didn't hurt the listening experience. Listen to a sample and judge for yourself. I gave him 3 stars but 3 1/2 would be more accurate.

The only problem I have with the book is the poor job Random House Audio did in dividing out the chapters. Often it doesn't matter but with a short story collection it is helpful if the audio book chapters line up with the book chapters. They do not. Someone at Random House needs to find a new profession. I found one story I could not finish (The Semplica Girl Diaries). I spent god knows how long trying to find the end of the story. It is harder than you think. I didn't know if I was still in the same story or if I had jumped into the next. It was a real pain. Some of these stories should be listened to again and again. Being able to find them easily is something Random House should have considered. I took the time to locate the chapter start times.

George Saunders' short stories are beautiful, yet frightening; hilarious, yet unsettling. And I think that's because, while his plots may involve the bizarre – human lawn ornaments, love-inducing pharmaceuticals, thwarted abductions – his characters and their moral dilemmas seem so real. It's the honesty he gives to their humanity and the possibility of redemption that make the stories seem instructive, sacred. And with Saunders narrating, there's a closeness to the material that resonates when listening. You get the sense that you're hearing the characters as the author heard them in his head, whether it's the voice of a baby deer or a manager giving the worst pep talk via memo. Saunders is a natural storyteller – giving characters distinct voices and believable pacing. But it's his simple telling that makes these stories so special.

For those who don't know his work, Saunders is at once very accessible yet profound, with a few sci-fi elements, but really centered around the human mind. He creates fictional worlds to explain our inner world, that is the best way I can think of to explain.

What a treat to have Saunders himself narrate his own work. Now I sometimes hear his voice narrating my own thoughts. Weird. Loved these stories and have listened twice through already. Reading more in print, but look forward to more Saunders-narrated audiobooks hopefully.

I know a lot of people love these short stories and love the author. I found some of the stories to be good, and some just didn't really keep my attention. I listen to a lot of audiobooks. This one is somewhere in the middle. I've tried to listen to Saunders' new novel Lincoln and Bardo, an audiobook that many people rave about. It wasn't for me, so maybe there's something in Suanders' work that I don't get.

I'm late to the George Saunders fan club, but Tenth of December was amazing. Belongs on the same shelf as Pynchon, McCarthy and DFW in the pantheon of amazing American writers. He has a voice that captures the depth and vibrations of America's modern tragicomedy. He dances on the same ground as David Foster Wallace. The sophistication of his prose is amazing. He writes on a tightrope of madness and morality. There were a couple stories that were objectively only four stars, but emotionally, I wanted to finish this collection of short stories and run out and buy, beg or steal all Saunders other work. If that isn't a reason to give a book five stars, well my whole system of celestial ratings is completely F-ed.

I could never have known

I suppose for some, these kind of edgy stories might be commonplace, but, honestly, I have never read anything like this book. I am used to going from point A to point B with all of the numerous offshoots that an author can muster but I just had to hold on with this journey. The stories are complex, strange and wonderfully buoyant. They are beautifully written so I never let go of where Saunders chose to take me - I loved this read. One needs to be pushed off one's assumptions every once in a while.

"The best art has its reference points in real life." By Carver's definition, Tenth of December is the best art. Saunders looks at people in the context of our culture and reflects them back through his writing with unflinching accuracy. It's acerbic, dark, even frightening, and at the same time Saunders can elicit a contradictory pathos and humor, that brings us back to the yin and yang of real life, like no other author. It is that tragicomic element and Saunders' compassion that keeps the light twinkling in some dark moments in these stories.

I had read a few of these vignettes in The New Yorker, and had read Civilwarland in Bad Decline before this purchase. This compilation of stories is a bit of a departure from Saunders previous writing and seems also more human and real. The characters are challenged or damaged by societal judgements, relationships, the roll of the dice...but there is a redemptive quality that comes through in each situation. The interior monologues are just brilliant; authentic, whether it is a 14 yr. old diva who realizes she has just opened the door to a murderous rapist (Victory Lap, my favorite) or an old man dying of cancer and bent on suicide (Tenth of December). Saunders gets into their heads--the reference point feels as real as it gets, your emotional response to the stories tells you so.

I can't recall ever seeing so many literary giants' names attached to a book, like *Product Placement/Integration*, by the critics...Vonnegut, Pynchon, Twain, Checkhov, Orwell, Hemmingway, Barthelme, Wallace, Joyce, and O'Connor...but Saunders is an original that is genius. This truly may be "the best book you'll read this year." [NYTimes]

Bonus that Saunders reads his own work, but he speaks rapidly and words run together-- you may want to keep your device at regular speed instead of 2x. With the quick shifts of character consciousness, there are times that it's also difficult to distinguish which character is speaking. For readers that aren't sure about reading a volume of short stories, this is a great collection by an author that is considered the master of the genre. The 10 stories have different themes and pacing; you experience a bubble effect that I preferred to savour rather than jump immediately into the next story. Short stories are perfect for days when that *real life* conflicts with the desire to read all day.

Saunders is a formalist who loves to play with form. He is also funny, also witty. His characters are put through excruciating trials. They are often not bright. They are very earnest. Their relatives and bosses are often not bright, and are often also earnest. Everyone in these stories is suspended somewhere below the middle of a brutal pecking order.

But unlike other sardonic cool guys who are better and smarter than their characters (I'm looking at you, Sam Lipsyte), Saunders is not cruel. In fact, these stories are suffused with empathy and tenderness. Even while admiring some amazing feat of form or concept, I often found myself, halted on my morning walk, in tears for these characters.

I've only read Saunders in the occasional story he publishes in the The New Yorker, and have always relished their strange richness. A whole book of these stories is quite a bit more rich, and strange, so I listened to just one or two at a time. Not just because there's a lot to think about, but because there's also a lot to feel about.

Better in tangible book form, but that is me

If you could sum up Tenth of December in three words, what would they be?

As I said in my headline, I wish I rather had the book in hand. The author uses many current colloquialisms with which I'm not familiar (that shows my age!) and I would have liked to see them. The stories are good: bizarre, contemporary 'problems', esp. of parenting; that I liked.

Did George Saunders do a good job differentiating all the characters? How?

I was not always sure who was talking

What I said above, applies to this book. Otherwise I am an avid audible.com listener.

The Master of the conversations inside our head...

Definitely, but I would warn them they need to be able to laugh at our dark side

George is a genius and hearing him read his work made it all the more interesting.