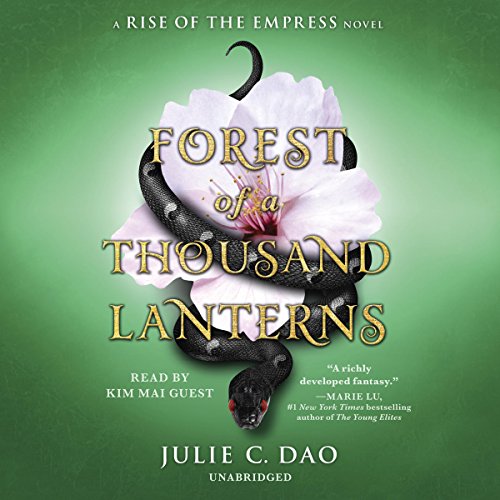 Forest of a Thousand Lanterns

The Wrath and the Dawn meets Snow White and the Huntsman in this dark and mystical East Asian fantasy reimagining of the Evil Queen legend about one peasant girl's quest to become empress.

Eighteen-year-old Xifeng is beautiful. The stars say she is destined for greatness, that she is meant to be empress of Feng Lu. But only if she embraces the darkness within her.

Growing up as a peasant in a forgotten village on the edge of the map, Xifeng longs to fulfill the destiny promised to her by her cruel aunt, the witch Guma, who has read the cards and seen glimmers of Xifeng's majestic future. But is the price of the throne too high? Because in order to achieve greatness, she must spurn the young man who loves her and exploit the callous magic that runs through her veins - sorcery fueled by eating the hearts of the recently killed. For the god who has sent her on this journey will not be satisfied until his power is absolute.

Set in an East Asian-inspired fantasy world filled with both breathtaking pain and beauty, Forest of a Thousand Lanterns possesses all the hallmarks of masterful fantasy: dazzling magic, heartbreaking romance, and a world that hangs in the balance. Fans of Heartless, Stealing Snow, and Red Queen will devour this stunning debut.

"A masterful reimagining of the early life of Snow White's Evil Queen." (Booklist)

I had my doubts and the story started out pretty slow but it was as terrifying and brilliant as the reviews said. I was wondering which fairy tale this would be and now I know without a doubt... I'm still reeling and wondering if I should even get the next book since I know the story well, but I'm sure curiosity will get the better of me eventually...

If you love stories about people scraping their way through the political machinations of a monarchy, this is wonder. Beautifully written and told. Set in a Chinese influenced nation with rich folklore and mythological beings playing into the main action. This story is ultimately not my cup of tea, but that is no knock on the quality of this story. The performance is fantastic and i really enjoyed the reader.

The best flawed character that I couldn't stop rooting for. Then, I felt guilty that I rooted for her and wanted someone to stop her. And then I thought, yes this is her destiny, let her succeed. And then... Yes, this was a story that had my emotions all over the place. Gripping. Dark. And lovely...indeed!

The story is about Xifeng who was born out of wedlock. Her mother “died from shame,” and so she was instead raised by her aunt, Guma. Guma tells Xifeng that the girl will become an empress, and so she teachers her poetry, calligraphy, and lady-like mannerisms. Unfortunately, Guma is also a terrible abuser and beats Xifeng constantly. One day, Xifeng decides to run off with her childhood sweetheart (a sweetheart who she might not actually love), to meet her own fate on her own terms…

I want to say that this was a fun and fantastic listen, but it just…wasn’t. I was just bored. The narrator, Kim Mai Guest, just didn’t sell the characters for me. But, I don’t think it was entirely the narrator’s fault. The material she was given just wasn’t engaging. I didn’t bond with Xifeng. I didn’t bond with Wei. Guma was the usual “bad guy” to get away from. I wasn’t invested in the plot or where it was going. Believe me. I really, really wanted to finish this book. It was recommended as being one of the “good ones.". Unfortunately, it just didn’t do it for me. I exchanged it for something different.

The story was very good and so was the performance. The only issue I can think of was that it was a bit predictable at some parts. Towards the middle I started to feel as though I was reading from the perspective of the bad guy as if she was going to turn out to be an "Antagonist" as opposed by her early appearance as a "Protagonist".

It's pretty rare that I read a book from a villain's point of view in which they aren't framed as really being the hero all along. Xifeng is a complex, interesting woman who has a choice about whom to become. There's a lot about fate/destiny in this book, but at no point was it framed in a way that made it seem as if she couldn't have easily chosen a different path than the one she ultimately made.

I'm glad I listened to the audiobook version of this book because looking at the spelling of Xifeng's name versus how Kim Mai Guest pronounced it, I wouldn't have been able to pronounce any of the names correctly. That being said, it took me some time to get used to Guest's narration style. In the beginning, it sounded far too matter-of-fact, but it became a lot more bearable once I increased the sound speed a little and waited for genuine moments of emotion. As the story progressed, Guest really did a wonderful job of giving the characters emotions and helping me feel what they must be feeling.

The story itself was interesting to me all of the way through. I like political intrigue when it's framed in the right light, and Julie C. Dao did that nicely. I struggled with Xifeng's internalized misogyny a lot. It was never addressed as being a bad thing so much as just-the-way-things-are, and I hate that shit. This book often had some very feminist (like when Xifeng noted how she went from being the property of her Guma to the property of Wei) and very tongue-in-cheek moments (like when one of the concubines - whose name I can't spell because I heard it and did not see it - said she was a protector of women despite treating her maids like trash and harming any woman she viewed at a threat). Obviously, the author wanted this character to seek power in whatever way works best for a woman in a patriarchal setting like this, but by giving her zero female friendships (the one she came closest to was treated as a deception, but half her male friendships she had were genuine and not emotionally treated like a mere tool for her ascension who she could/would betray at any cost). But maybe that was the point. Maybe her lack of real friendships with women could have helped her make better choices. I kind of doubt it, though.

As introspective as Xifeng was about her internal struggle with darkness and light, she maintained that because she wasn't like those dirty, slutty Concubines, she was somehow above them, and I'm exhausted by the treatment of sex workers (especially considering that the youngest one is heavily implied to have not chosen that for herself AT ALL) as being gross and bad. If that's what it had taken for Xifeng to gain power, you better fucking believe she would have done it, too. She just saw a way she preferred and made that work for her. She had her head so far up her ass where other women were concerned she couldn't see she was just like them, maybe even worse. Mighta been the point.

Anyway, four stars for the story and narration. Minus one star for the frustrating treatment of women and those who use their bodies to survive. Coulda been five if the author had addressed it at all.

Good story, it was carefully laid out and the narrator did a great job. I’m looking forward to reading the next one in the series.

I loved this book. The story slowly unfolds and reveals the twisted underbelly of what greed can do a person's soul.

Such a massively entertaining story. Based (?) on Snow White, it was fun trying to see which characters would be which and Ms. Dao does a fantastic job of investing you in every single character even with all the twists and turns and even after you figure out who the "bad" guys are.

I so cannot wait for the sequel.

The narrator does a great job with all the different characters. Even tho she doesn't have even close to a "masculine" voice she pulls off every character with just inflection and great character acting.

Loved this story and how dark it went, truly devious and need to continue this series for sure! Love the chinese influence and just the whole system of emperors etc.