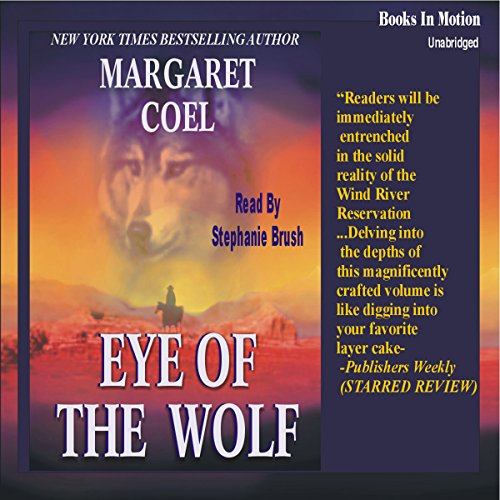 Eye of the Wolf

Eye of the Wolf

"This is for the Indian Priest...." The cryptic message on the answering machine was clearly meant for Father O' Malley. The unemotional voice was speaking of revenge against old enemies, and wanted O'Malley to visit the site of the 1874 Bates Battle, where Captain Bate's cavalry, lead by Shoshone warriors, massacred nearly everyone living on an Arapaho tribal grounds. Now, someone has left three dead Shoshones on the battlefield, positioned to mimic the bodies of those Arapahos killed in the historic slaughter.

Frankie Montana, attorney Vicky Holden's latest client, is a frequent guest of the reservation's holding cells, and after a recent heated encounter with the three dead men, is the number one suspect in their deaths. Despite his faults, Vicky doesn't believe he is capable of murder. Instead, she suspects that someone is trying to stir up a war between the Arapaho and Shoshone people, ripping open the still painful wounds of the past. The question is: why?

"A winning combination of interesting and complex characters, fascinating settings...and great atmosphere." ( Denver Post)
"Delving into the depths of this magnificently crafted volume is like digging into your favorite layer cake; thoroughly delicious." ( Publishers Weekly)

Again, the plot is interesting, as are the issues and locale, but the writing is still amateurish. Way too much soap opera, too many ugly characters, too much wailing and whining, misery and dysfunction, plus some cliche situations (like walking in on Vicky and John). And the solution is nonsensical.

AUDIO: This reader is so awful that she makes me groan. She does an adequate job with the two main characters, most of the time, but overacts or mis-acts with all the rest. Worst of all, she can't pronounce Shoshone, which is half of what the book is about and is repeated incessantly throughout.

Eye of the Wolfe

I have to agree with the Marjorie who has also submitted a review on this book. Narrators make or break an audio book and this one is, and I hate to say it, terrible. I have read the entire series and the reason I have "read" them is because I cannot take the narrator. This is the last book in the series and I decided to purchase the audio, just because I love audio books. Ugh, sorry. Again if you cannot pronounce the words properly, they should not be narrating books.
As for the story itself, I wish she would lighten Vickie up and give her a backbone, come on. I love Father John and totally understand his background and being alcoholic, very good perspective on him. But again I agree with the other review in that some of it is to "soap opera ish" If Vicki "pushes her dinner away" one more time I swear!. I don't think that girl every eats! Also, in the last book Father John had his plane tickets in his hand and was leaving the reservation.... I am not quite halfway thru the book now and not a single mention of why he is still there?? I find same same story line in every single book of the series, Father John living minute to minute waiting for his marching orders. Give it up already. Obviously he is staying there, so tidy up that part and get on with it. Margaret Coel has written a good series and I will be on the waiting list for the next one, just not in audio unfortunatly.

The narrator could not be better. A great balance to the smart and engaging story.

This book in the series is a tad below the author’s best . . . but just a tad . . . Vicky Holden is working in a law office with Adam Lone Eagle, when she gets a call from her old friend about her wayward son, Frankie Montana. Adam doesn’t want the law firm taking on cases like Frankie’s, but Vicky can’t deny her old friend, and believes that Frankie is innocent, despite his reckless behavior. Meanwhile Father O’Malley gets a call from another minister alerting him of a cryptic phone message, “This is for the Indian Priest.” The message leads Father John to the site of the 1874 Bate’s Battleground where Shoshone warriors massacred nearly everyone living on the Arapaho tribal grounds. Here Father John finds three dead Shoshone men, posed as if they had died in battle. Turns out that the same three men had been in a bar brawl with Frankie Montana. This particular book has less of the cultural details than the others, and stretches the believability of what even Vicky would put up with in regards to her own people, in my opinion. She’s a strong and determined woman. The best parts of this story are of Father John and his new assistant and the battle they share with alcohol; the young female student and girl friend of one of the Shoshone men who was killed at the Bate’s Battlefield and Father John’s attempts at helping her. And of course, the continuing friendship between Vicky and Father John O’Malley. The mystery of the murder of the Shoshone men was solved successfully

I love this series by Margaret Coel. And Stephanie Brush doing the narration makes my commute to work enjoyable.