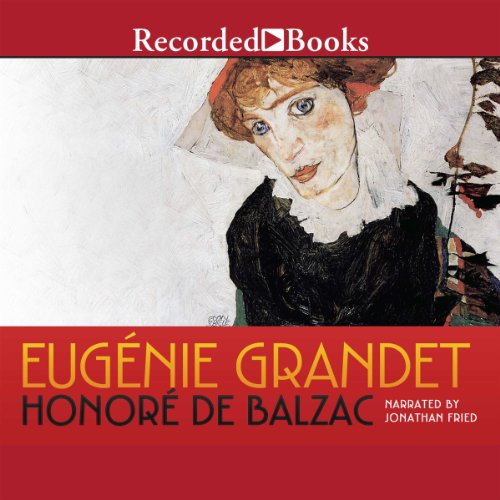 Hailed as the father of the naturalist novel, French author and playwright Honoré de Balzac left a legacy of treasured literary works that include Père Goriot and Cousin Bette. The daughter of a wealthy but miserly man, Eugénie Grandet falls in love with her penniless cousin, Charles. The two plan to marry, but at the behest of her father, Charles must first go overseas to make his fortune. Returning years later, Charles calls off the engagement, leaving Eugénie heartbroken and vengeful.
©2013 Honore de Balzac (P)2013 Recorded Books
Sciences sociales Classiques Shakespeare
Afficher plus Afficher moins

Balzac's "Eugenie Grandet" is an early and short entry in his massive "Human Comedy" project. The comedy in Balzac's case is not funny: it's simply showing people "as they are" rather than how they wish they were.

And in this provincial town, how they are is mostly unpleasant. Eugenie's father is a sharp dealer in the business world, is astonishingly rich, and is a mean-spirited miser. He resents the money they have to spend on candles, and the family spends many evenings in the dark. Eugenie has a set of rare gold coins that are worth a fortune, and her father demands to see them on a regular basis - presumably to make sure she hasn't cashed them in.

Eugenie's cousin Charles shows up, and Monsieur Grandet has to break the news to him that his father, overwhelmed by financial ruin, has committed suicide. At one point Grandet and an ally go to Paris and in a series of complicated transactions, they bilk the creditors of Charles's father and skip town. I have to admit I couldn't follow the details of their scheme; it hinges on the legal differences between bankruptcy and liquidation.

Ultimately Eugenie, her father's sole heir, ends up rich and alone, her hopes for love with Charles having come to nothing. At one point Charles does seem to genuinely love her; she gives him her gold and he goes off on a business venture; but fooled by Grandet's meanness into thinking they're poor, he turns his romantic attentions elsewhere.

The novel's pace is uneven. There are many sharply etched scenes, gradually building toward an ugly confrontation; and then suddenly the narrative whips through the next decade in a couple of paragraphs.

Not many people to care about here. Everybody but Eugenie is, or becomes, corrupted by money. Still, it's a carefully observed novel of provincial life, and is definitely one of the shorter and more accessible novels of Balzac.

Unfortunately I didn't care much for the Recorded Books narrator, Jonathan Fried. His reading style is a bit too "external" for me, too much like an announcer and too little like a storyteller. The translation is relatively recent, though, and on balance I'd have to say it's worth a listen.

please narrate more novels by Balzac, Mr. Jonathan Fried. you are amazing. this novel, like all Balzac works, did not disappoint. I enjoyed every word, every second.