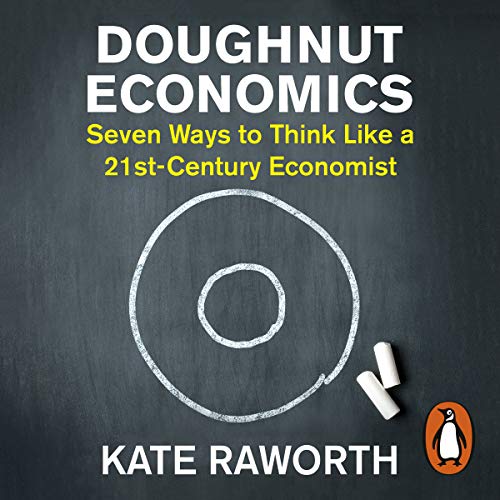 Economics is broken. It has failed to predict, let alone prevent, financial crises that have shaken the foundations of our societies. Its outdated theories have permitted a world in which extreme poverty persists while the wealth of the super-rich grows year on year. And its blind spots have led to policies that are degrading the living world on a scale that threatens all of our futures.

Can it be fixed? In Doughnut Economics, Oxford academic Kate Raworth identifies seven critical ways in which mainstream economics has led us astray, and sets out a roadmap for bringing humanity into a sweet spot that meets the needs of all within the means of the planet. En route, she deconstructs the character of 'rational economic man' and explains what really makes us tick. She reveals how an obsession with equilibrium has left economists helpless when facing the boom and bust of the real-world economy. She highlights the dangers of ignoring the role of energy and nature's resources - and the far-reaching implications for economic growth when we take them into account. And in the process, she creates a new, cutting-edge economic model that is fit for the 21st century - one in which a doughnut-shaped compass points the way to human progress.

Ambitious, radical and rigorously argued, Doughnut Economics promises to reframe and redraw the future of economics for a new generation.

This book is written by an activist, not an empirical observer of reality. It's well researched at times, but the author often gets lost in her own righteousness. It's is somewhat a nice counterbalance to anyone that's gone down the libertarian rabbits hole, but this book doesn't really address the stronger points that Hayek et al raises, simply dismisses them and moves on. The book assumes policy can overtly control the economy from the top down. Hayek describes this as the fatal conceit. An overestimation of ones control over their complex environment.

You would think that after the financial crisis and decades of knowing about environmental pollution and human induced climate change we would change the way we do business. But the story we tell ourselves and each other about what an economy is is still based on the idea of limitless growth which can't be sustained on an inherently finite planet. In these precarious times the world seems to fall back on very simple (political) messages because out of fear our brains revert back to primal survival modes. That's perhaps why I was first opposed to this image of the doughnut but throughout the book have come to embrace it as the simple message and shared image the world needs to replace our old ideas. Kate was educated as an economist herself and admits that the people best fit to be the new world's economists are the ones not formally trained as one. Throughout the book she reveals how the ideas of Maynard Keynes, Adam Smith, Friedman and Stiglitz were used to push nations' agendas for GDP growth in a global financial market economy for which there seemed no alternative. Even though political and economical philosophers back to Aristotle have made a distinction between economics as the production of value in the household and the accumulation of wealth as something different, in capitalist society we have to come to regard the latter as the goal since we don't monetize the first. Kate is aware of the power of evoking mental (visual) frames and in the end talks about the economy as a plane that took of and has been flying ever since but we didn't really think how we would land it. Far from talking doomsday scenarios, she actually makes very concrete proposals to start thinking differently within the means of the planet and actually change the goal of what we're doing. She does not say it in these exact words but we should focus on human nature and happiness (learning skills, being connected, etc) rather than material gain beyond what we need to live well. We should create and economy in which everyone can thrive, us and the planet, regardless of whether the economy grows or not.

Loved it, and it is very inspirering! strongly recommend it if you feel a bit overwhelmed by the state of the world and can't find comfort I. the traditional economic viewpoints.

this book keeps focussing on graphics and images, all the while referring to the 'conpanion booklet'. if I had my hands and eyes available I would be reading a paper book. this is like listening to a comic book. absolutely worthless.

Listened to it twice just to really get the hang it. Idealistic, provocative and preachy. Will follow the movement, not yet a fan.

This book should be in the high school currículum of all countries. The chances of improving the world highly increase if every person (not every economist) reads it.

Seems very theoretical and social justice like but Amsterdam has actually implemented it so maybe it works practically? For someone who took h2 econs half of the book was basically covered academically so most ideas weren’t too new.

Well researched and thought provoking. The author seemingly leaves no stone unturned whilst remaining engaging throughout the book.

I need to re-listen to this book, it's most definitely worth it and there are ever new facets to be discovered.

crucial book for this decade of needed change.

crucial book for this decade of needed change.
The explanation of the history of económics explain the addiction of GDP growth and the logic of the economy needed for the next millenium creates a powerful case

analytically showing the dead end our economic system is trapped in and showing one way that may lead out of the disaster. hopeful, but not blind for the challenges that the first world will have to face.

Going against all the mental conditioning

A fundamentally important book that helps opening up our mind to look at our story as humans. Probably can help us to avoid fatal errors we set ourselves up to with our current thinking.

This book gives a precise insight on the deadly combination of using the last resources of our planet and Neo liberal economics. It is time to rethink our thoughts of economics and especially infinite economic growth and Kate Raworth offers realistic advice and knowledge how these challenges can be addressed.