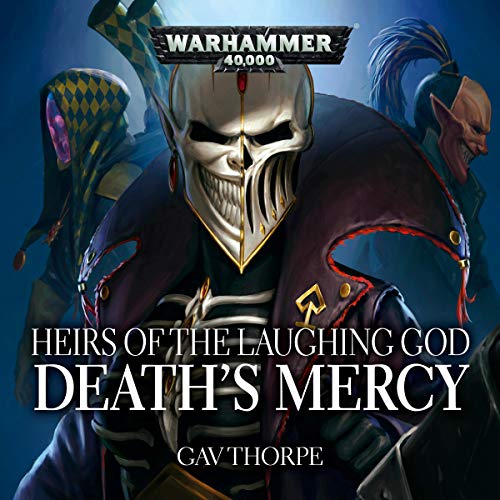 The Harlequins of the Masque of the Fading Dawn bring their deadly artistry to bear on a force of humans - but their Death Jester has another agenda that puts their performance into question.

Listen to It Because:

Gav Thorpe continues his exploration of the Harlequins and their myths and legends in an audio drama that focuses on the sinister Death Jester.

Following the whim of the Laughing God, the Masque of the Fading Dawn conduct an audacious attack against mon-keigh invaders. Battling to secure their legacy, the troupe put on a performance worthy of remembrance against a backdrop of acerbic remarks from their Death Jester, Adroniel. Intent on a spectacular finale, Adroniel becomes hell-bent on obliterating their unremarkable human foe with deadly artistry, until a strange encounter challenges her role in the final act....

The Best One Yet

A change of pace from the first chapter as it is less narrated, letting the voice actors carry the story. Getting an insight into Harlequin philosophy is one of the strong points, for me at least.

fabulous!
dialog is deep. acting above average. close your eyes and enjoy this story. the harlequins are truly having more to them then any of the other groups of Eldar

The voice actors do some great work bringing these ridiculous characters to life in an aggressively over-the-top 40k script, and it is a joy to listen to them. Adroniel's actress does fantastic work as the focus of this drama, and her interactions with the Troupe Master and Shadowseer are so fun. The way the trio narrates their way through battle is refreshingly different in the way it often abandons typical narrator-focus.

Our Motley clad trio does it again!

Another fantastic story revolving around the Masque of the Fading Dawn. I cant really say anything bad about it, the performance was fantastic and the sound design on point. Echo, the Shadowseer is more prominent this time, which is great because he had such little dialogue last time around.

The story seems to have less narration this time around. Im still deciding if i prefer the narration style of A Deadly Wit or the limited style found in this story. Both worked very well.

The only downside I have is we still dont know the Masque colors for their standard troupe players, but that is not going to ruin my fun for the story, only the tabletop game.

I recommend this book whole heartily for any Harlequin fan.