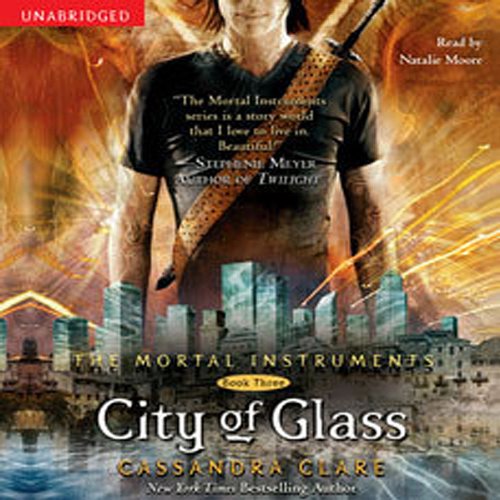 To save her mother's life, Clary must travel to the City of Glass, the ancestral home of the Shadowhunters -- never mind that enter-ing the city without permission is against the Law, and breaking the Law could mean death.

To make things worse, she learns that Jace does not want her there, and Simon has been thrown in prison by the Shadowhunters, who are deeply suspicious of a vampire who can withstand sunlight.

As Clary uncovers more about her family's past, she finds an ally in mysterious Shadow-hunter Sebastian. With Valentine mustering the full force of his power to destroy all Shadow-hunters forever, their only chance to defeat him is to fight alongside their eternal enemies. But can Downworlders and Shadowhunters put aside their hatred to work together? While Jace realizes exactly how much he's willing to risk for Clary, can she harness her newfound powers to help save the Glass City -- whatever the cost?

Love is a mortal sin and the secrets of the past prove deadly as Clary and Jace face down Valentine in the final installment of the New York Times best-selling trilogy The Mortal Instruments.

I have been waiting on pins and needles for the final installment on this series. And Cassandra Clare definitely delivers. She has so many plot twists and shocks, that continues in this book. Action packed and brilliant. Definitely not a disappointment, I am just sorry this is the last one. I fell in love with her characters and wish to read more about them. She could definitely be ranked up there with JK Rowling on her brilliant ideas and shocking plot twists. I even bought the books on hardcover because I loved them so much!

I really enjoyed this series. I was thinking while I was listening to them they were wordy but I am a VERY impatient person and hate/love suspense so it was killing me not knowing what was going to happen next which actually made them great! I had a few of those, "well I didn't see that coming" moments. I liked the fact there were no long drawn out very explicit sex scenes. I can only listen to those so much before I just want to skip over them! These books kind of reminded me of the Twilight Series in a way. I would recommend them.

Nop, I wouldn't compare both version. Each of them has their very unique characteristic. The audible version is very practical when you cannot longer keep reading.

What was one of the most memorable moments of City of Glass?

The last part, when Jace is talking with the first wife of his real father about how inquisitor sacrifice her life for his life knowing that Jace was his grandson.

What does Natalie Moore bring to the story that you wouldn’t experience if you just read the book?

The tone, the pitch of her voice bring the story alive as each character were reciting the dialogues.

I think both are great. I find audio books to be a great companion to the physical books.

Natalie Moore is such a great narrator! She is clear and has great diction and acting. Wonderful. Wish she had done all of the books in the mortal instruments series.

It's always nice to find a series that you love when most of the books are out and your not waiting and waiting for each book. IF your like me you will love starting this series. I did some research and Cassandra Clare has written the prequel to this series about the parents and I can't wait to start that, The Infernal Devices.

So if your looking to get engrossed and you love a story that keeps going, then start reading these now!

I have said this before, parents can let their children read these books with confidence. Unless your against your children reading about magic and such things.

The love stories keep you captivated and are tantalizing as well as innocent.

These books have a Harry Potter feel mixed with Twilight, so if you are a fan of any of those series, you can get ready for the movies again!! First one is out August 2013.

The downside, which really isn't that bad is that the narrators for the book keep changing. So you can't count on a consistent narration through the series. I love the books so it didn't bother me much, but I have read that many people are disappointed by it. Just beware of that.

Fantastic storyline, and the narrator is perfect again! Natalie Moore is definitely my favorite narrator for this series, she really brings the characters to life with perfect voices and attidues. Great job! I really wish she would have done the entire series... it's exhausting adjusting to so many narrators and so many different character voices.

What made the experience of listening to City of Glass the most enjoyable?

Natalie Moore did a wonderful job narrating along with a good story made this a enjoyable listening experience.

Which character – as performed by Natalie Moore – was your favorite?

I think Sebastian. Really I think this is because no other narrator has done him in other stories.

Without spoiling anything I will say most of the interaction between Clary and Jace. He poured his heart out a few times and that moved me.

You can tell that this was going to be the last book of a trilogy. Happy ending and all.

So glad there are 3 more books in this series!

Hmmm...no. I like them both equally, but audio versions are great & easier to revisit prior to the next installment being released so you can refresh your memory.

I love Clary in this book because she is so brave and determined.

Captured me from the start

This book was so intriguing from the get go. I couldn't put it down! Listened to all 4 books of the series in a week- I couldn't stop listening!

I would rather JC have an English accent like he did in the first book but otherwise pretty good listen.