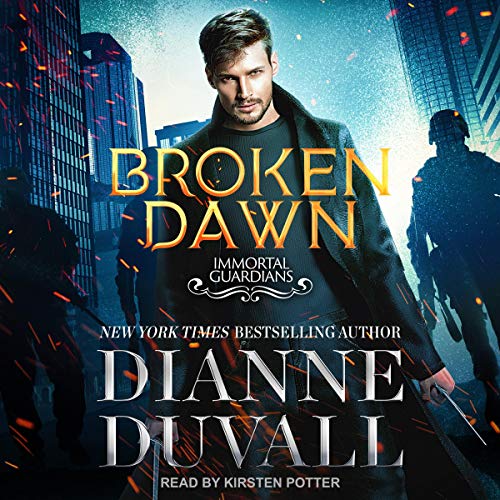 Nick Belanger can't stop thinking about the single mother who lives next door. She's smart. She's funny. She's so beautiful he can't stare at her too long for fear his eyes will start to glow. But Kayla thinks he's just an ordinary guy who works in security. Finding out he instead is a powerful immortal warrior who hunts and slays psychotic vampires for a living may not go over well, particularly since she has a daughter she doesn't want to endanger.

Kayla Dorman can keep neither her gaze nor her thoughts from straying to the man next door. Who can blame her really? He is the epitome of tall, dark, and handsome with smart, charming, and honorable thrown in. He's also a few years younger than her and surely would not be interested in a single mom who hasn't dated since her divorce. At least that's what she thinks until an accident nearly takes her life and Nick risks all to save her.

The dynamics of their relationship swiftly change. The friendship they've developed over the years deepens into love as the two spend every minute they can together, laughing and teasing, never suspecting a threat may lurk in the shadows.

I LOVE Dianne Duvall's Immortal Guardians series. Adore. Can't get enough. I fell in love with the characters from the start and here I no looking back. The beat part of the series is we continue to see main characters from previous books play critical roles or at least make appearances. And new characters are introduced to set up new books. The plot is overreaching the series, so read these books IN ORDER. or it won't be as enjoyable, even tho the summaries say you can read as a stand alone. Don't. It will ruin the build of the story and characters.

What I love he most is these stories aren't just romance. There's always far more going on, yet the romance is always there and written really well, with ONE exception. Initially, I could overlook it, and still found the sex scenes tantalizing. Then it became a joke between my daughter and I who also reads the series. The past couple books, it's become annoying and ruins he sex scenes. I can't even smile at the repetition of EVEY OREVIOUS SEX SCENE. especially the fact EVERY SINGLE FEMALE likes sex the same way, hard and fast, with the guy almost always either going down on her first to her protests, or protesting he wants to but can't wait. And the worst part is the "Soooo goood!" EVERY SINGLE FEMALE states during sex EVERY TIME, and read the SAME WAY by Kirsten Potter (who is a fantastic narrator but in this she too contributes to the loss of individuality in the characters). Oh waits except in The Lasaran, in which the guy uses the phrase instead, which isn't enough of a difference. Everyone has different responses during sex. I'd expect some "Oh, that feels good", or some "OMG" weak knees, ANYTHING OTHER THAN "SOOOO GOOOD" Ugh, at this point it's a turn off.

During this book, I actually found myself unable to get into the sexy time and even cringing and waiting for it and yep, same thing again. At this point, I'm calling Ms. Duvall out on her poor writing, character development and lack of heat in her sex scenes. It truly affects the enjoyment of her books. Every sex scene could be ANY couple in the series because during sex, her characters are cookie cutter cutouts, with zero individuality. And it runs what is a fantastic storyline!!!

That said, that is literally my ONLY complaint with the series: being unable to get into or enjoy the sex due to reading the same sex scene over and over in every book. Am I repeating myself? Gets annoying, huh? I still love the series. enjoyed the rest of the story, but wish I could enjoy it all. She brings such depth and twists and turns that it baffles me why she chooses to reuse the same love scenes, style, phrasing, etc over and over. Very frustrating!

Anyway, I loved Nick, Kayla and daughter, and seeing how other branches of the network functions. I also truly enjoyed getting to know Elianna better, since her story is next in the spin off series in space. (Dont let that turn you off the books. It works and it's great!! But only start The Lasaran AFTER Death of Darkness! Read in published order or you'll miss too much!! and get spoilers for previous books). I was glad to get a glimpse at another town and different IGs, even though its much shorter than her usual novels (or feels that way). A fun read after the rollercoaster ride of books 1-9 and The Lasaran! But I'm looking forward to getting back to the North Carolina group, as there are still some guys there that need pairing up *cough DAVID cough* AND we need to know about CLIFF!!!

Overall, a decent addition to the series, but slower than the others. And I gotta dock it for the unoriginality of the love scenes and verbiage. Please change that up, Dianne!!!

NOTHING NEW OR EXCITING!!

Kirsten Potter is Excellent as Usual!!

I Am So Sorry to have to give Broken Dawn 3 stars. But this story is boring, moves slow and resembles other IG stories. It's repetitive at times. I didn't care for the whole dementia crazy villain storyline.

I just wish DD would restructure her Gifted One female mates. Instead of the majority of them being in mid to late 30's. Kayla is 38 I think Seth's wife is 40. What I call the over the Hill Gang. Why not get some young blood in there. Do something exciting and different. Send us another Ami who can get pregnant. Someone young fresh and exciting.

The other problem I had with the story is Nick tells Kayla in the beginning of the story that his friend Marcus and his mate who happens to be Ami adopted there child Adera. NO!!! Marcus and Ami had Adera the natural way "Sex". What happen here? All Immortal Guardian Fans loves little Adera and her parents Marcus and Ami.

The story is rushed. I am giving it a generous 3 stars!! Every author deserves a miss and Broken Dawn is a miss for me. After Reading The Lasaran Ms. Duvall's last book in a spin off series any story would be a hard act to follow. The Lasaran may be her best work yet!! It was Exceptional!! So maybe my expectation for Broken Dawn was to high!!

Kirsten Potter did her job!! She is an Excellent Narrator for the IG series.

Nick is my new favorite hero!

I’m gonna keep this spoiler free but you know what the best part is? You can read this book if you have not read others, and it’s going to be completely okay. Start here if you want. That’s going to be okay but make sure you are ready to invest days in the other stories because it is going to be addictive, regardless of where you start.
I love the story because it has a very organic feel. The relationship between Kayla and Nick is sweet and hot. I just wanna reiterate that and expand. It’s hella hot. Fan me down these two could set fire to the world.
Nick is so very kind and adorable. He’s not like some of the others because he is more awkward and wary. It’s very endearing to read a different type of immortal than we are used to. Yes, he’s got baggage but who doesn’t? Nick is perfection because he is very special.
This story proves once again that Duvall can flat out write. Her writing never ceases to amaze.
Kirsten Potter is amazing as always. She’s perfect as all the characters.
I can’t wait till the next book! Gimme more, gimme more!

Wasn't worth the credit.

Another HIT! I love Nick!

This was another banger of a book! I loved Nick and I am so glad things worked out for him. Now I am waiting for David to find someone!!

Dianne has done it again

Narrator was great. No surprise there. story was good I liked that the original IGs were included. Looking forward to the next one.

Much like the other the Immortal Guardians series suspense and intriguing awareness keeps you reading. Ms Duvall ability is I make you laugh with the characters . Worth every penny or credit.

Loved it and going to listen to it again and again! Nick and Kayla are another great IG couple.

Loved all the IG that was a part of this story..Glad to know more about Eliana .Looking forward to the Sedonians.

Again and again Dianne draws you into the fantastic world of the Immortal Guardians. Simply put I cannot say enough to bring justice to this author and her abilities to create an experience of pure reading enjoyment. She never disappoints.