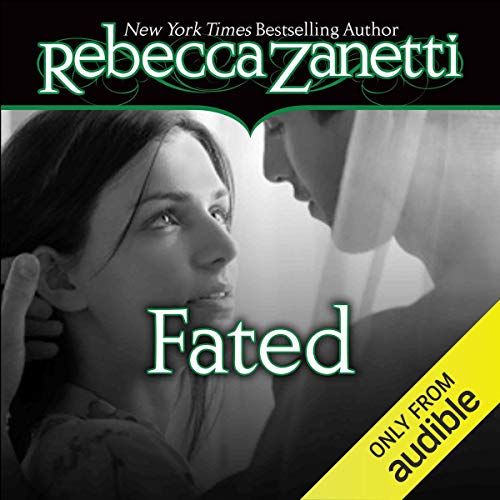 Cara Paulsen does not give up easily. A scientist and a single mother, she's used to fighting for what she wants, keeping a cool head, and doing whatever it takes to protect her daughter Janie. But "whatever it takes" has never before included a shotgun wedding to a dangerous-looking stranger with an attitude problem....

Sure, the mysterious Talen says that he's there to protect Cara and Janie. He also says that he's a 300-year-old vampire. Of course, the way he touches her, Cara might actually believe he's had that long to practice....

EDGE OF YOUR SEAT SUSPENSE & A HOT ROMANCE TOO

When Empath Cara and her 4 yr old psychic daughter suddenly get kidnapped early one morning little does she realise but she'll be married and mated within 24 hours..... to a handsome, sexy, overbearing, dictatorial, arrogant Alpha Vampire called Talen who says he's protecting her and her daughter Janie from imminent and great danger. There's instant chemistry and lust between them but Scientist and single Mom Cara's no pushover and so she tries to fight him and his sexy pull by always planning to run away (which does get a little annoying at times but hey I've never been kidnapped by a Vampire!). So right from the start she's suddenly plunged into a paranormal world where Vampires, Witches, Shapeshifters and Faires exist..... and their lives will never be the same again.

Cara and Janie are 'gifted' and they are very much wanted by more than just Talen as an evil force of Vampires called the Kurjans also wants her and Janie so it's a race against time to escape the threat and then escape him too. Talen's combat skills are lethal but it's going to take patience, understanding and loving care to win over his stubborn soulmate who he has been waiting 300 years for. However, as the villains draw nearer and they devise some frightening life altering drugs and start kidnapping, the emphasis of the story becomes one of survival rather than seduction.

If you can get over the instant attraction, lust and sex (as I so easily did) then there's a really exciting ongoing story of five Royal Vampire brothers who need to claim and protect their gifted mates from the evil Vampires. And, in the process, they have to fight and win over their unwilling mates whilst keeping them from the clutches of their deadly enemy whose Oracle has foretold a Prophecy, a Prophecy that's going to shake and change the world.

There's thrills, chills, sexy times, romance, passion, twists, nail-biting tense situations, snappy dialogue and a love story that has a HEA ending but the War is about to begin. Multiple POV's but mainly from the H/H's and a narrator who did all the many character's voices so well you could easily distinguish who was talking whether it was..... a 4 yr old girl, an Alpha Vampire, a feisty Heroine, an evil sulphur smelling Vampire or all the other interesting secondary characters.

Worth a credit? Yes it was a very enjoyable, addictive and creditworthy start to a new paranormal series where Alpha Vamps want to possess, protect, impregnate and cherish their mates but unfortunately so do the evil Kurjans and it seems it's going to be a bitter fight to the death involving other paranormals. Book 1 in the Dark Protectors series...... the feisty vs. the dominant and good vs. evil makes for an entertaining listen and a good start to a brand new series.

Fated Was A Decent Story!

If you could sum up Fated in three words, what would they be?

I loved most of the characters and the banter between the males was funny, I like how they took care of the four year old Janie while her mom, Cara, was not around. However, the lead female character was annoying to me.

What aspect of Karen White’s performance would you have changed?

I though the narrator tried to put to much emotion into Cara's responses to Talen; it came across as whining and breathless. I cringed and rolled my eyes a lot during the "steamy scenes".

Fated, from the moment I touched you.

After listening to the first story, this series sounds like it has a lot of potential, and I will listen to the next story.

The narrator was awful

I love this series. I’ve read some of the books and decided, because I get a free download every month with audible, to try listening to one. I “bought” the first two books in the series as I started out of order. The narrator was awful. She made the heroine seem like a simpering fool. I’m thinking of returning the second one and just buying the book. The narrator ruined the story for me.

Narrator ruined this one

I love the dark protectors series. It's one if my favorite but the narrator reaches a crescendo at the end of every paragraph and sounds like a screech owl. I felt like she was yelling at me for daring to purchase the book. I couldn't get through it and will not buy another book in the series.

Well the story isn't bad per say but the reader is horrible. This breathy voice constantly sounding like she is either super scared or faking arousal ... It's hard to listen to for the eight hours the book takes. The story is ok - I mean nothing new but hey these kind a books are hardly ever a "new" story but still entertaining. But man the heroine is annoying. Super weak and such a push over all u wanna do is shake her. I don't have a lot of patience for weak female heroines... At least not in my books. Her guy is kind of an ass too, very middle age: come here woman and be my slave kind a guy. The combination is this weird dominant-submissive relationship that gets real weird when it comes to their sex life... Not really my thing.
Wouldn't buy it again and was kind a waste of a point....

The only problem with this series is the narrator she sucked. Maybe you should have had a male narrator too she sounded like a robot. I have this series in digital and it's very good. If this series could be done over choose a male.

This story was great! I've loved it since I first read it years ago and wanted to add it to my Audiobook collection as well. However, the narrative was atrocious. She sounded like a high-pitched robot the entire time, there was no performance at all. This is one of those books that is so great it deserves a re-do with narrators that can really bring it to life. Even better if it's a dual narration. I will not be buying the rest of the series even though I love it, because I couldn't put myself rough the torture of listening the this horrible narration again.

An amazing start to a wonderful series.

I loved this book. It was an incredible starting point and introduction into a new world. Cara and Talon we’re perfect together. I can’t wait to see what happens with the rest of the brothers and Janie.

I imagine the narrator has done a lot of great stuff; this just isn't one of them. I like the story, but the overtly dramatic descriptions distract from the content making it difficult to enjoy; especially during the sex scenes which almost sound forced and a touch pornographic (like listening to your friends in high school read a bodice ripper for the first time *eye roll much*).

I'm trying right now to finish listening to it because I spent a credit on it, but another 8 hours may be too much. I wonder if I can get a credit refund before I keep going.

the narrator RUINED THIS BOOK

it was like listening to a grocery list being read! absolutely HORRIBLE narrative, such a waste of a good book!!!