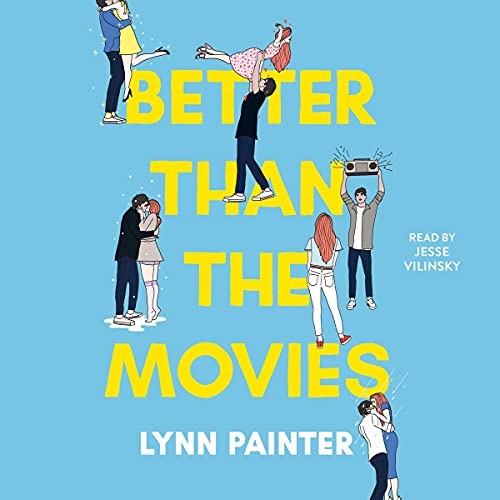 Better Than the Movies

In this rom-com about rom-coms, in the spirit of Kasie West and Jenn Bennett, a hopeless romantic teen attempts to secure a happily-ever-after moment with her forever crush, but finds herself reluctantly drawn to the boy next door.

Perpetual daydreamer Liz Buxbaum gave her heart to Michael a long time ago. But her cool, aloof forever crush never really saw her before he moved away. Now that he’s back in town, Liz will do whatever it takes to get on his radar - and maybe snag him as a prom date - even befriend Wes Bennet.

The annoyingly attractive next-door neighbor might seem like a prime candidate for romantic-comedy fantasies, but Wes has only been a pain in Liz’s butt since they were kids. Pranks involving frogs and decapitated lawn gnomes do not a potential boyfriend make. Yet, somehow, Wes and Michael are hitting it off, which means Wes is Liz’s in.

But as Liz and Wes scheme to get Liz noticed by Michael so she can have her magical prom moment, she’s shocked to discover that she likes being around Wes. And as they continue to grow closer, she must reexamine everything she thought she knew about love - and rethink her own ideas of what happily ever after should look like.

At first, I thought maybe this would be a little immature for me, but after listening for more than 10 minutes, I was hooked. I found myself trying to escape any and everywhere in order to find time to listen 💗 I highly suggest this book, it kept me giggling out loud all the way through!

This was a really cute, fun and sweet romance with LOL moments, smart plot lines and it was also a bit touching.

A few things bugged me though and those were:
First, the female MC is sooo childish and immature at times. I get that it’s part of her character definition, that she’s growing throughout the book and that it’s a YA. But still. It felt like she was too dramatic at times (which at the beginning I blamed the narrator for, but it’s not her - it’s the character). There was even one specific scene where I was just shocked by what came out of her mouth and honestly couldn’t believe what a brat she was being.
Overall, I still really enjoyed this book, so judge for yourself how much such a thing would bother you. I guess in teen rom-coms it may be excepted…

Another thing that bothered me was how she kept saying the male MC is the “bad boy”, but honestly he was such a great male character. Again, as I continued listening to the book I realized how this was (to my understanding) all part of the idea of the story and the growth and maturing we see the female character go through.

To me those issues haven’t ruin the book, but I could definitely do without them.

To sum up, it was a good YA rom-com - fun, funny, sweet and truly endearing ;) It was fast paced and the narrator read the male characters as well as she did the female ones (which is always a concern when you buy an audiobook lol).

P.S.
If you love rom-coms and more specifically - enjoy rom-coms *movies* you’ll have even more fun with all the little references :)

I just wanted a mindless read that was enjoyable with enemies to lover trope, but this was so much more. Great debut novel with some very original elements that are unique from other YA novels of the same trope. Totally relate to one of the main characters soundtrack making as I've been that way since I was little myself. I wish audiobooks could play the music in the background. I feel that would really enhance the listening experience with this one!

Loved the narration and the book was super cute. Kinda sad it’s over! Very fun

Honestly, wanted to love it more than I did

I went it so excited to listen to this book, but just couldn't find myself loving it as much as I hoped I would. For the most part, the story was cute and adorable. Girl and neighbor boy, who are always pranking/messing with eachother, strike up a deal to help girl get boy of her dreams, only for her to fall for neighbor boy along the way. Adorable right!? And don't get me wrong, I LOVED the banter between the two leads, their interactions (for the most part) where actually really funny and adorable. It had the makings of being a great boy-next-door, enemies to lovers kind of book. Where it missed the mark, for me at least, was the female lead, Liz. At first, I liked her, but as the story went on, the less I felt I could root for her. Liz was pretty awful to those around her and down right b*tchy at times. I know she had a chip on her shoulder and had some trauma in her past, so she was understandably guarded, but some of the thing she said/did were just... awful. And while I was able to sympathize with her for some (such as not wanting to go dress shopping for prom because it was a reminder to her that her mom couldn't be there), it just grated on my nerves how immaturely she handled the whole thing. I also feel she was forgiven way too easily. I honestly believe Wes deserved better.
All that aside, I think the reader did a very good job.

This is my favorite listen in a while! It was so fun & cute. Yes you can predict the outcome, but the story to get there is an easy, fun listen and I listened every chance I could! I really loved the movie quotes and especially the song references. I often paused and pulled up the mentioned song. Definitely recommend!!

Great start; slow ending. Narrator did a great job on being the character to life.

This is definitely a stereotypical, enemies to lovers type book. It takes place their senior year of school. I think younger readers would really like it, it was cute but very predictable.

Typical young storyline with the adorable ending i will forever love; even now in my 30s.
and the playlist is perfection, its on my spoyify account.

excited to try her other books.

The perfomers voice is also wonderful. Her voice is soft, and vivid; giving an opportunity for placement of characters in the movie you create in yOur own head while listening. Thats the most important part, in my opinion.