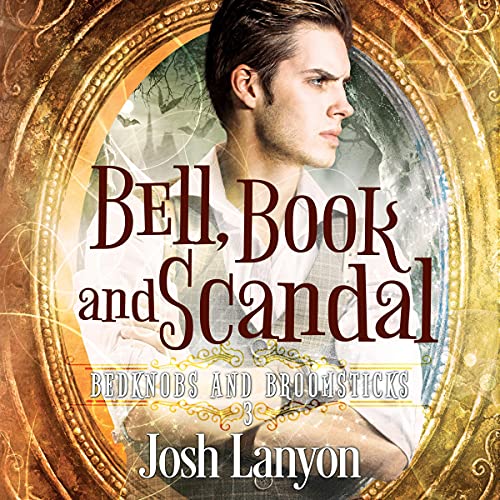 Black Magic. Blackmail. Little Black Books. Must a witch break his vows to save his marriage?

Cosmo Saville loves that his husband has finally accepted his witchy ways. And in return, his promise to stay out of police business guarantees them a happily ever after. At least, until he discovers he might be responsible for a dangerous game of blackmail....

Police Commissioner John Joseph Galbraith feels relieved that his marriage is back on track. Especially since he has his hands full with a high-profile suicide and rumors of a city-wide extortion ring. But when he stumbles across Cosmo breaking his vow by playing cop, John agonizes over old wounds.

With the commissioner’s badge and family in jeopardy, Cosmo has no choice but to put his life on the line.

Can the witch expose a dark conspiracy, save John’s career, and return to love’s delicious spell?

Bell, Book and Scandal is the third book in the Bedknobs and Broomsticks romantic gay mystery trilogy. If you like quirky characters, snappy spells, and madcap suspense, then you’ll love Josh Lanyon’s supernatural story.

The trilogy is OVER! I want more from this world!

What a wonderful finish to an incredible series. All ends with a happily ever after, for the most part. She gives us a new mystery for the book that involves some well-connected folks getting blackmailed resulting in the suicide of a prominent citizen! This puzzle and all remaining subplots were resolved beautifully and I LOVE Josh Lanyon for allowing bad guys to die horribly! Gosh, I want to hug the woman for that! Yes! I jumped up and cheered several times throughout the (audio)book, which is beautifully narrated by Kale Williams. At one point, the drag queen's outfit I was trimming in sequins went flying off somewhere! (Sorry, 'Desiree'! 😬) This writer is not afraid to write characters that grow and evolve. Cosmo grows throughout the series from a guy that seems somewhat timid and apologetic to a more assertive, put-his-foot-down, 'I am who I am' kind of guy by the end of 'Bell, Book and Scandal, Bedknobs and Broomsticks Book 3)! San Francisco Police Commissioner John Galbraith does some serious growing, too! He went from being a tough, unfeeling, controlling bully to a gentler, kinder more loving man willing to compromise. I can't believe I actually liked this character by the end of the series! Wow! Then the world-building is just awesome with Wiccans and witches among the normal folk--so darn exciting! I'm really not ready to let the world Josh Lanyon has created go. What about Jinx, John Galbraith's sister who is under the tutelage of Cosmo's mother? What about Ambrose whose dangerous grandmother is out of the picture? He was being mentored by Cosmo Saville himself? Then there's his friend Andy who was in love with John's Army buddy! It is REALLY over between them? And what about the great-great-great-great uncle who got out of the mirror and saved Cosmo's bacon in book 2? He's bound to be a lot of fun, given his willingness to flash folks when he was imprisoned in the mirror? (He's my idea of a good time, let me tell you!😆) Here's hoping Mx. Lanyon has more for us! Thanks again for a wonderful time!

The story of Cosmo and John has been an interesting journey and though I believe that there is real love there, I am at the third part of the series and I continue to question if they belong together. I can see the the cracks appearing in John’s veneer but I just... That said, the mystery side of the story keeps you engaged and you want to know what happens next. Narration by Kale Williams is excellent!

I really hope this book series continues. This one had a decent resolution, but... I want more.

I like wandering through Cosmo's world. Seeing how Cosmo's relationship with John is teaching him about life is entertaining all by itself. I will always appreciate a story where people become stronger together. The supporting cast is equally engaging.

This book had a bit more tension than the first two. I walked a few extra blocks just so I could finish listening to a certain chapter.

The one thing this book taught me that surprised me was that I appreciate the rhythm of how some people write. The fact that Josh Lanyon wrote an urban fantasy story instead of a plain mystery made me take notice of that concept. There is just something about the rhythm of Josh Lanyon's words that I will always find to be engaging and soothing.

As always, I enjoyed Josh's works. I enjoyed the development of the story as well as understanding more of the world of the Crafts.

After making it thru the first 2 novellas (complete novels is a major stretch) I felt I had to trudge thru till the end. And now I’m just sad…. *** SPOILERS AHEAD*** There was no climax, the main characters simply ended in the same places they started…. Angsty and Winey. I would have thought at the very least Cosmo would figure out how selfish moody and annoying he is. I honestly was hoping John would dump him at the end.

I LOVE this series!!!! I want more and more books based on this lore, I can express how much I enjoy the characters, they aren’t weak pushovers who wait for someone to save them, they don’t get put down and belittled by they’re love interest and just except it, I really REALLY enjoy this series, thanks for writing it:-)!

A great book for a rainy day

This book--the whole series--is fantastic. I'm glad I found Josh Lanyon's work. It's smart, witty, and fast paced. Kale Williams does excellent work with the narration. I'm off to find another Lanyon audiobook.