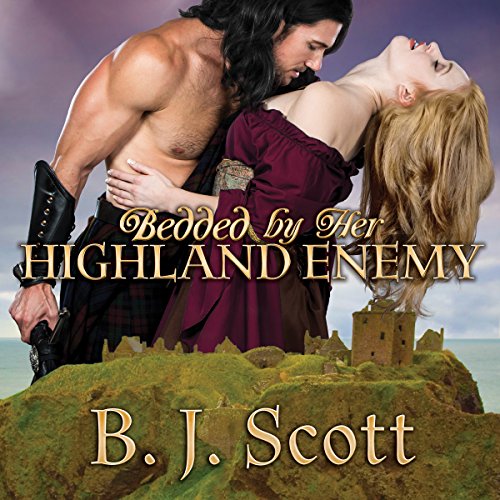 Bedded by Her Highland Enemy

Brianne Dunbar survived the massacre that claimed the life of her husband and son and vows to seek revenge when she learns that the king has ordered her to marry the lecherous son of the laird she believes is responsible for the attack. Can she follow through with her plan, or will the secrets she carries change her destiny?

Despite every effort to resist temptation, Gavin MacClurry finds himself captivated by his brother's betrothed and must find a way to stop the wedding, prove his clan's innocence, and win Brianne's heart.

What a great story. Author B. J. Scott has written an exciting, intriguing and very sensual story. Lovely romance and great suspense. I was carried away as I listened to this book. I highly recommend it.
Narrator Angela Dawe is one of my favorite female narrators and doesn't disappoint in her performance.

This was my first book from this author and I have to say, I hope not my last. Not only was the romance filled with all the good things we love, tension, lust, great sex, true love and a happy ending, but overall the core storyline was really incredible. From the start, you'll love the hero and heroine and hate the villains. More than once I caught myself thinking about how hard it would be to be in Brianne's shoes. There were a couple of times where I thought the storyline was slightly rushed and bit unrealistic but all in all, I highly recommend this book.

The lead couple, Gavin and Brianne were very well balanced. They had confidence, courage and even a little self doubt. And as for the villains... I found myself rooting for the demise. of Laird Keith and Dermid. Their characters were so well done you just couldn't wait for them to get what they deserved. Laird MacClurry was no saint either, Through most of the story, I just wanted to reach in and shake the guy. Although, he did redeem himself somewhat at the end.

The narrator for this book is one of my favorites too. Ms Dawe is one of the few female narrators in my opinion, that does well at creating distinctly different voices for each character and she makes men sound like men. She's also an accomplished actor when she narrates. All of the emotional ups and downs are portrayed in a way that does great justice to this book.

**Note: For those who don't like to read books with explicit sex, this book isn't for you. While nicely done and in my opinion necessary to the storyline, it does contain explicit sexual scenes. And for those who are concerned with language, the "F" word also popped up a just few times.

for example. this dialog - Oh no, my lady, they've burned the village and all of our homes! They've set fire to our crops and killed our live stock! Winter is coming and they've killed our Laird. What should we do? We have no one to tell us what to do! Who will help us!

Ugh!! Not even half way through chapter one. I just cant stand it.

Great story can't wait to read the next one.

loved it. I can't believe how fast I got thru it. I just didn't want to put it down.

So, 24 reviews and no one mentioned the words sex or sexual tension. I almost didn’t buy this book because of that. That’s also how a lot of authors get 1 star reviews, someone looking for a book without sex and then finding out there is. Or someone looking for a book with sex and having it not mentioned so they by-pass this one. You’d have thought that in 24 reviews someone would have mentioned it. I looked up the word “sex” in the search box and there was none. How stupid is that. The minute I read the part where Gavin thought of what he’d like to do to Brianne I knew I wouldn’t be sorry for buying this book. I liked the storyline immediately, add some sex into it, and it was bound to be good.

The part I found a little strange was that Brianne referred to her dead husband, Tieran, as “the love of her life,” and she would “always love him” and she would “never love again,” yada, yada, yada. BUT it was not that long before she was telling Gavin she loved him. That part was rather rushed.

However, it was a really good story. There was three men you loved to hate: Brianne’s father, Laird Keith, and Gavin’s brother Dermid, and Gavin’s father, Laird MacClurry, but I’d have to say Laird Keith was the worst of the three. Two others were “hateable” also: Angus and Ulrik. They were pretty terrible. There were so many bad guys in this story! But I did like Colin, Caledonia and Alice.

The sex in this book was explicit, so if you don’t like that then keep looking. And the F-bomb was used 4 times.

I will definitely be reading more by this author.

As to the narrator: Angela Dawe has become one of my favorite narrators over the past year. She reads with emotion and gives every character his or her own voice. AND the men sound like men. You can’t ask for more than that.

The protagonist suffered a major loss but seemed to hardly feel it. This made everything that came after feel insincere and shallow. More emotional complexity was needed. Lust alone can't carry a romance. Narration was excellent.

I love reading about Highland Scots. Wish there were more by B.J. Scott in audible. This was a great love story although I was not surprised on the out come.

I enjoyed this book. I love action and from the beginning you get it. I am looking forward to the next book.

This is my first read from this author purchased on the 50% sale. I purchase all I can of narrator Ms Dawe when she reads in a Scottish brogue, none better. See Hanna Howell series, books 5,6.10 are my 5 star faves. This narrator makes that series wonderful as she puts you right there in the Highlands, on horseback or in the Crofts, Note I do use the new 1.25x speed on a mystery and suspense to match the authors intent. This author writes a light romantic, nothing too steamy, fast moving suspenseful adventure with a dab of comic relief in this tale. See Audibles short author Bio for instructions on seeing more titles. The publishers summary is spot on. In my humble opinion, this tale is just a bit too short, 6hrs. 30min for the author to fully make this adventure into a 5 star re listen story, unless I just want another round of listening to Ms Dawe delightful Scottish brogue from our hero and friends. While I love the Hemingway writing style, and this author truly has that gift, this tale needed just a bit more to make this a fully satisfying stand alone book. Great authors do it in about 8 hrs, and it is rarely the case under that time frame. Come to think of it, I see a saga series coming if the hints were spot on. Eg Colin character is just only one example. At the time of this review, this is the only story published at Audible by this author. So without knowing this authors other books, there maybe other stories to continue this tale with familiar characters. Were my comments helpful?

this is a great story. a little heart wrenching at times but wonderful in the end. the narration is FANTASTIC. get the book and add the narration, you will love it.