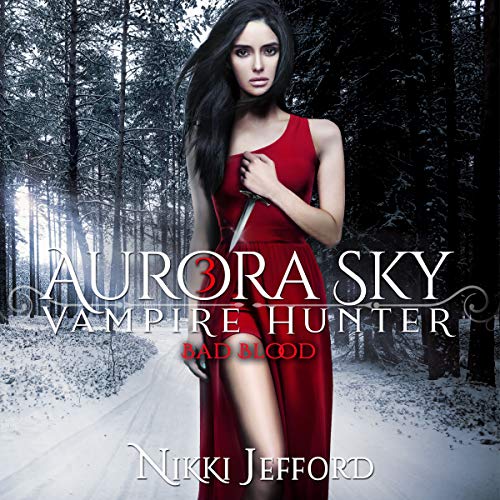 Aurora returns from boot camp to a new assignment, an unwelcome roommate, and the increasingly amorous attentions of a certain vampire hunter.

College is starting, and so is Aurora's undercover work at a network of swanky parties known as "Tastings" for high rolling vampires who like their blood laced with fine wine. But Aurora's not the only one on the prowl. An underground investigation is under way to find out who killed one of Anchorage's most prominent vampires. And Aurora is a prime suspect.

LOVED IT AGAIN!! GETS BETTER AND BETTER!!!

What made the experience of listening to Bad Blood the most enjoyable?

The story and the narration was awesome all the way through!!!

Have you listened to any of Em Eldridge’s other performances before? How does this one compare?

The Aurora Skye series and she is great!!!

I am beginning to think, I would love to see this on the big screen!!

After boot camp, Aurora and the teams new assignment is going to Tastings...fancy Vamp parties where wine and blood are on the menu...well things from the past come back to bite them, no pun intended...and Dante gets kidnapped...Aurora learns some hard truths and old friends unite to save the day!!!

Great addition, Can't wait for the next!

I really enjoyed this book and can't wait for the next!
Lots of action and plenty of drama. I can see the plot growing and can't wait to find out how it all ties in!


Bad Blood picks up 6 months after book 2, Northern Bites, when Aurora was sent to boot camp. She's completed her training, and been away long enough for the suspension to die down about her involvement with the murder of Marcus. Or so they thought.

Aurora comes home to find that everything has changed. Her mom is a acting like a different person, Daunte has devoted himself to her, and she has an awesome new place to live near campus. Things are looking up for Aurora Skye... until she meets her roomate.

Noel Harper. Former goth best friend that she caught with her ex before being shipped off to boot camp. Noel is no longer the sweet goth girl she once knew, now shes all bright colors and smiles.

Add in to the equation that Aurora is now friends with her former arch nemesis, her ex keeps showing up unexpectedly, Melcher has assigned her to a case she doesn't want any part of, and crazy vampires are popping up in every direction with a different agenda!


Bad Blood is another great addition to this series! Picking up six month later, Aurora is done with boot camp. She has her field test, and then it's back home where she'll be starting college. Her test is to kill a vampire, so the book starts out with action! But Aurora's trials don't stop when she returns home. She's focused on taking out Jared and there's the issue of her new housemate, and a lingering ex-boyfriend. Not all is bad in the life on Aurora Sky though; she's got the attention of the swoon worthy Dante. There is a romance and lots of action.

If you could sum up Bad Blood in three words, what would they be?

What other book might you compare Bad Blood to and why?

Which character – as performed by Em Eldridge – was your favorite?

Like the first two parts of this series, I really enjoyed this.

Jefford does it again!

Great continuation of this fun series. The Teenage Vampire hunters in alaska begin to question authority. Can't wait for more!

trouble from all sides for sassy Aurora!

Wonderfully narrated, and a smooth, fast-paced story with excitement, mystery and enemies coming from all sides, which kept the intrigue and anxiety high. I loved more of Aurora ' s spunk dealing with crazy family, dating boys, threatening vampires from all sides and the struggles with government controlling her life. More inventive YA/NA supernatural goodness from Jefford and so perfectly narrated. I'm off to download the next audio. What a cliffhanger!

Loved this book in the series.

Narrated as well as the previous books. Love how Aurora finally realizes what exactly she is and all the twists.

I have listened to the first three audiobooks in the Aurora Sky series and Bad Blood is my favorite story out of the three thus far. Author Nikki Jefford is most definitely a gifted writer. Each story grabs your attention right from the start. The story is packed with action, mystery, and intrigue. Nikki has grown as an author and it shows in each story she writes. The story is enticing enough to keep you immersed in the story. Jefford has changed things with this story and the plot. I can say that I'm not a fan of cliffhangers but Nikki writes in a great cliffhanger that doesn't leave you mad and screaming at the story. I have come to love most of the characters and Nikki did a great job with her development of all the characters.

Em Eldridge does a fantastic job with her telling of this story just as she has with the other two audios in The Aurora Sky series. I can tell that Em's talent has grown from her first story in the series. I really enjoy the majority of each characters accents and voices. I really like Aurora and I find her to overthink too much the majority of the time. But, if you pay attention then you know all of her thinking tends to keep her friends and her out of some bad situations. I enjoyed Valerie the most and I like her sarcastic attitude. I loved that she had no problems saying what's on her mind and telling people what she thinks. Em did a perfect job bringing Valerie to life. Of course she brought life into the entire story. She kept me engrossed from start to finish. I can't wait to listen to Hunting Season. I didn't have any trouble identifying the characters in the story because the narrator does a great job distinguishing each and every character in this story. A perfect story and a perfect performance. Overall, a perfect 5 star rating!

I received this audio at no charge from the author in exchange for an honest and unbiased review.

This is a great book; this is the second book in The Aurora Sky: Vampire Hunter series written by Nikki Jefford and narrated by Em Eldridge. You will want to read this series in order just so you get a feel for the characters. Aurora is a vampire hunter on assignment in Alaska to help them control the vampire problems there. She is able to kill vampires by using her blood to paralyze them, giving her time to kill them. Aurora returns from boot camp to a new assignment, an unwelcome roommate, and the attention of a certain vampire hunter. Aurora is working undercover at college to uncover a network of swanky parties known as “Tasting” for high rolling vampires who like their blood laced with fine wine. These books just keep getting better and better.

The narrator Em Eldridge, did a wonderful job, and was very easy to listen too. She did a great job with the different characters and their voices.

This book has a great story; if you are looking for a great romance, then you need to get this book. I am looking forward to the next book by this author. Once I started listening to this book, I didn’t want to stop until the end.

A Review copy was provided to me in exchange for a fair and honest review. The free book held no determination on my personal review.

Great! But you'll want the next one in hand!

If you could sum up Bad Blood in three words, what would they be?

I don't know. Part of me likes Aurora in this one, but Dante and Fane are always great.

What does Em Eldridge bring to the story that you wouldn’t experience if you just read the book?

I like her voice and feel like she helps bring the character to life in a way I wouldn't experience if I read the book.

No. But it had some witty one-liners

I feel like the story ended right in the middle. Make sure you have the next one ready because you'll want to dive right in.